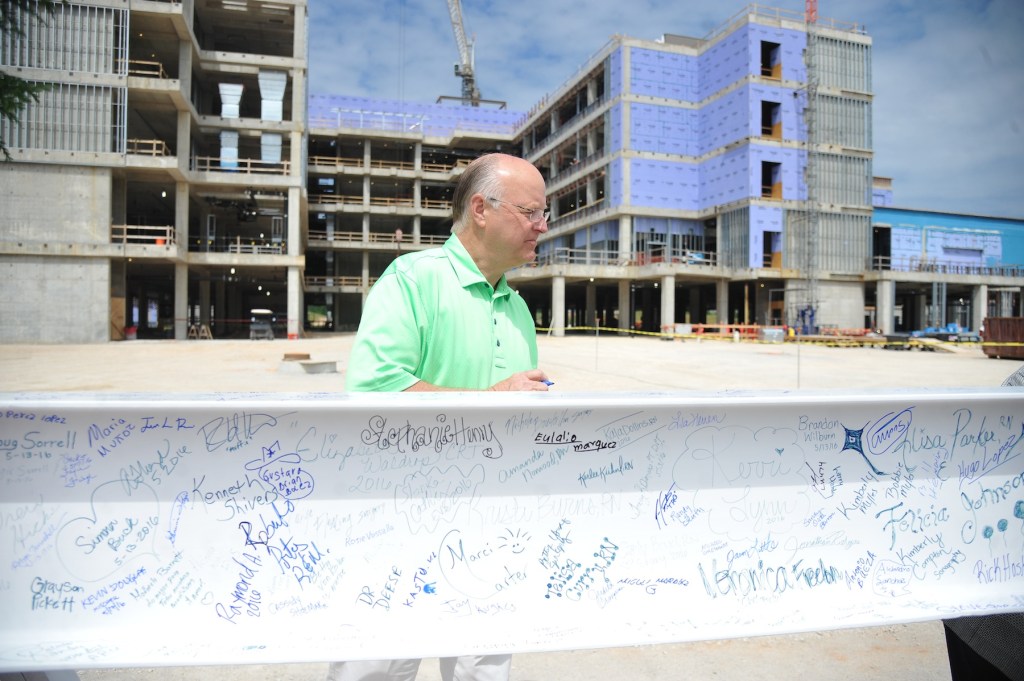 Kenny Gowen signs a beam before it is put in place at a topping ff ceremony at the new Baptist Memorial Hospital-North Mississippi under construction in Oxford, Miss. on Tuesday, May 17, 2016. Plans call for the new facility to see its first patients in November 2017.

With about a year and a half left before it opens, construction of the new Baptist Memorial Hospital-North Mississippi is moving along on schedule and on Tuesday a ceremony was held to celebrate the installation of the final beam being placed on the hospital’s frame.

top of the last beam.

“We’re celebrating this milestone which is the placing the uppermost significant structure of the building,” said David Hultstrand, senior superintendent with Robins and Morton Construction. “The flag symbolizes patriotism and pride of being built in the U.S. And the tree is an old tradition that goes way back before our European ancestors came over.”

According to an article in the New York Times, there’s some evidence that Scandinavians were the first to use the tree to symbolize the topping-out of new construction. They placed the top of a tree on top of new homes to thank the gods and tree spirits.

The final beam was signed by many Baptist employees, doctors, board members and friends of the hospital before it was raised to the top of the new hospital and set into place. A round of applause came from the crowd that gathered to celebrate the first major hurdle of construction.

Hultstrand said now that the frame of the hospital is complete the construction will focus on completing the exterior of the building.

“Now we put on exterior brick, windows and start closing it in,” he said. “We’re also starting on the framing on the inside.”

The hospital is scheduled to start accepting patients in November 2017. The five-story, 600,000-square-foot building will have 217 beds and comprehensive medical and surgical services. The $300 million project expands Baptist’s nearly 30-year commitment to Oxford and enables the hospital to keep pace with community needs, according to Bill Henning, administrator and CEO of Baptist in Oxford.

“Our new hospital will improve the experience for patients and their families and enhance the working environment for our health care providers,” he said. “We’ve reached the highest level of a building that will help us continue to deliver the highest level of care, so that’s reason to celebrate.”

President and CEO of Baptist Memorial Health Care Corporation Jason Little said Baptist had a lot to be grateful for on Tuesday.

“We’re grateful for the patients who trust us with their care,” he said. “For the hard work and dedication of our employees, for the support of this community and for the workers who are building our hospital of the future.”