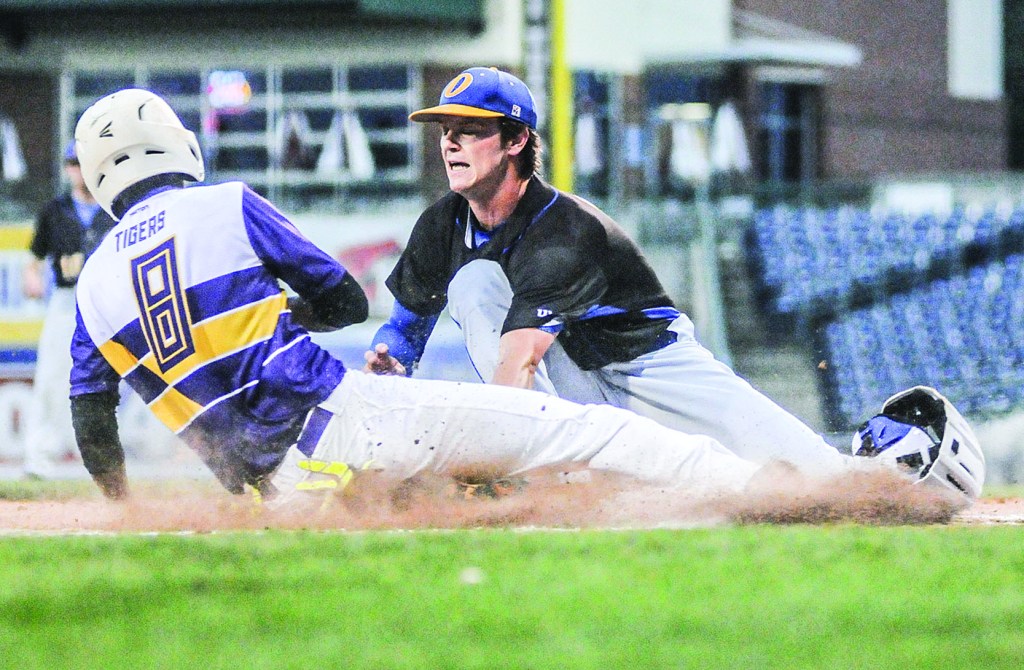 Hattiesburg’s Destin Holliman (8) slides in safely at home, scoring the Tigers third run, while Oxford’s Jason Barber attempts to make the tag during Tuesday night’s Game 1 of the MHSAA 5A baseball state championship series at Trustmark Park at Pearl. The Chargers took a 1-0 series lead over Hattiesburg after winning 5-3. (Photo by Davis Potter)

PEARL — Jason Barber has experienced plenty of ups and downs on a baseball field. But Tuesday night was just plain weird for Oxford’s senior right-hander.

The Chargers took the lead in the MHSAA Class 5A championship series with a 5-3 win over Hattiesburg at Trustmark Park. Oxford can clinch its second straight state title with a win in the second game Thursday at 4 p.m.

Barber (10-2) threw his eighth complete game of the season for Oxford (27-8) in what quickly turned into an eventful night for the Ole Miss signee. Barber carried a no-hitter into the sixth despite the teams being tied at 3 through three innings, finishing with a line of one earned run on five hits and six strikeouts after rebounding from a mess he got himself into early on.

“I had a no-hitter through the (fifth), and I had given up three runs,” Barber said. “It was very odd, but I just tried to battle and do everything I could to put the team in position to win.”

He also had three hits and drove in four runs in Oxford’s sixth straight win. Grae Kessinger, Drew Bianco and Sage Mullins each added two hits for the Chargers while Thomas Dillard drove in the go-ahead run in the fifth with a triple.

Barber gave himself a lead in Oxford’s first at-bat with a two-run single off Hattiesburg’s Dexter Jordan, but a walk, a hit batter and a fielder’s choice loaded the bases for the Tigers (26-8) in their half of the second. Barber hit Devin Lang to bring in a run and threw A.J. Stinson’s tapper back to him wide of catcher Thomas Dillard and to the backstop, allowing Hattiesburg to plate two more runs for a 3-2 lead.

“I was trying to think, ‘Get this done quick. You’ve got to turn two right here to get out of it,’” Barber said. “I rushed my throw, and I spiked it in the ground.”

Barber drew Oxford even in the top of the third with a single scoring Kessinger and blanked the Tigers the rest of the way with some help from his defense. The Chargers took the lead for good in the fifth when Dillard, after walking in his first two at-bats, roped a ball down the right-field line to score Bianco from first and added to it when Barber plated Dillard with a sac fly later in the frame.

“The whole bunch was huge tonight man,” Oxford coach Chris Baughman said. “We had 18 barrels against a really good pitching staff. … The only thing I’m mad about offensively is that we weren’t playing at Oxford tonight because we would’ve had five bombs and it wouldn’t have been close.”

Orrion Bailey ended Barber’s no-hit bid with the first of three straight singles for Hattiesburg in the sixth, but a pair of assists from right fielder Houston Roth prevented the Tigers from cutting into Oxford’s lead. Roth gunned down Bailey trying to go from first to third on Keylan McKellar’s knock and threw out Julian Conner trying to stretch a single into a double a batter later.

“Definitely the two plays of the game,” Baughman said. “Easily.”

The Tigers put two on in the bottom of the seventh before Barber got a strikeout to thwart Hattiesburg’s final threat and put Oxford on the brink of its first-ever repeat.

“It’s what he’s done his whole career,” Baughman said of Barber’s outing. “He doesn’t do it very often, but when he gets in trouble, he just has this second gear that he hits that makes him unique. He’s a winner in every sense man. He’s just good.”