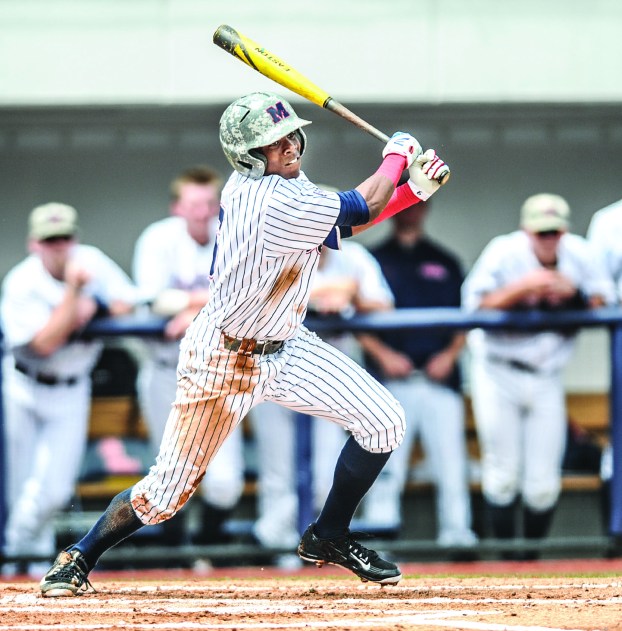 Ole Miss shortstop Errol Robinson and the rest of the Rebels head into the final Southeastern Conference series of the season against Texas A&M with a shot at winning the Western Division title. (Photo by Bruce Newman)

They were not supposed to be in this position if you ask everyone but them.

The preseason predictions had Ole Miss finishing fifth in the Western Division of the Southeastern Conference and not expected to do much after a season where they were a .500 team and had a quick exit in the NCAA Tournament in Los Angeles.

It will take winning the series at worst and getting some help from Arkansas, which faces No. 3 Mississippi State. The Bulldogs are tied with the Aggies atop the West standings.

“We’re very excited,” shortstop Errol Robinson said. “I know for a fact we’re excited. We’re still staying loose, but the dream and the goal is right there ahead of us, so we’re going to go take it.”

Going to College Station, Texas, and Blue Bell Park, the Rebels will be entering one of the most hostile environments in college baseball, but they can fall back on some favorable history as guidance. Two years ago, Ole Miss went there and took two of three from the Aggies in their own backyard when maybe that was not what was expected to be the outcome.

If they want any shot at winning the West, earning a first-round bye in next week’s SEC Tournament in Hoover, Alabama, as well as an outside shot at a national seed, history will have to repeat itself.

“It was a good weekend,” Ole Miss coach Mike Bianco recalled of the 2014 series between the teams. “I remember we won the first two and obviously kind of capped off a really good regular season for that team.”

Rounding into shape
The final stretch of the SEC schedule has seen Ole Miss go 15-4 after starting out 2-6 in conference play. That included winning five of its last six SEC series, including sweeps over Arkansas, Auburn and most recently Kentucky last weekend.

The offensive explosion is a key reason for the Rebels’ success, and part of that is due to the play of center fielder J.B. Woodman as well as Robinson, who has returned to form at the plate over the last month of the season. He also had a 5-for-6 game against Kentucky on Friday, which, according to him, was a career first.

Robinson is fourth on the team in hitting with a .278 batting average in SEC play with 12 runs batted in.

“I guess it’s just what happens with Errol Robinson,” Robinson said. “I kind start out a little slow and then things started clicking and figuring things out and you look up and (your batting average) jumps 150 points in a month. It’s honestly a blessing because sometimes you’re sitting down there wondering if it’s ever going to come together. That’s why baseball’s so great.”

Smith gets another chance
Bianco announced on Monday that Chad Smith will re-enter the weekend rotation, earning a start in Saturday’s series, and regular-season, finale. It has been a revolving door all year with Smith starting out there then having others replace him with James McArthur most recently trying his luck the past four weekends.

“He’s just pitched well,” Bianco said of putting Smith back in the rotation. “Ever since we’ve taken him out of there and put him in the midweek, he’s pitched well. Probably even getting better every week. He deserves it.”

PEARL — Jason Barber has experienced plenty of ups and downs on a baseball field. But Tuesday night was just... read more