The late ‘Captain Max’ is Citizen of the Year 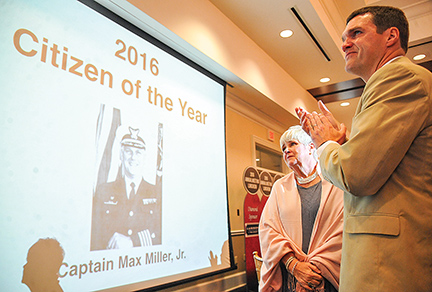 Janice Miller, left, and Ryan Miller accept the "Citizen of the Year" award on behalf of Capt. Max Miller at the Chamber of Commerce luncheon at the Inn at Ole Miss, in Oxford, Miss. on Wednesday, May 18, 2016.

The late Captain Max Robert Miller Jr. dedicated his life to serving others. Whether it was in the church, through his job at the University of Mississippi, in the military or at home, each day he tried to make someone’s life a little better.

For his dedication to his fellow man, church, God and Oxford, Miller was named as Citizen of the Year posthumously during the annual Oxford-Lafayette County Chamber of Commerce annual award ceremony Wednesday at The Inn at Ole Miss.

Miller, 67, was killed on April 22 in a car wreck in Calhoun County.

Each year since 1972, the chamber has recognized a local resident who has made a positive contribution to the LOU community.

After his death, letters nominating Miller for the award described him as faithful, dutiful, thoughtful, helpful, loving, selfless, warm, kind, humble and inspiring.

“These are the qualities that embody the spirit of this award,” said Rick Mize, outgoing chamber chairman of the board, who announced Miller as this year’s recipient.

Miller graduated from North Bakersfield High School in Bakersfield, California, in 1967 and attended the California Maritime Academy. After college he served as a firefighter and in the United States Coast Guard. He married his wife, Janis, in 1971 and the couple traveled most of the country while Miller served his country.

“Throughout his career, our honoree developed a reputation built upon love of family, dedication to others, and a desire to leave a positive mark on every person with whom he came in contact,” Mize said.

They eventually settled in Oxford, coming to love the city and Ole Miss while their son, Ryan, attended the university. “I remember being a freshman in 1997 at Ole Miss and my parents came to visit,” Ryan Miller said at the ceremony. “And I can remember my father saying, ‘Wouldn’t it be great if we got to live here.’”

Miller’s wife, Janis, and Ryan accepted the award from Mize.

“(Miller) would have been so humbled and would have told you there were so many more people deserving of this award,” Janis said of her late husband.

Just prior to Miller being named Citizen of the Year, Mize handed over his gavel to Ryan Miller, who will now serve as the chamber’s chairman of the board for the next 12 months.

Ryan works at Ole Miss as the programs manager and assistant director of the Center for Manufacturing Excellence.

“My father loved this community. It was his home and his heart,” Ryan said of his father after the ceremony. “He loved its charm, its tradition, its creativity, and its people. I cannot begin to tell you how grateful we are as a family that the community he loved so much would show so much love in return.

“This award is one of the greatest honors. I know my father would feel the same way.”

Also during the ceremony, Michele McKay was named as Ambassador of the Quarter and Lesley Downs was awarded the Outstanding Service Award for her work as chairman of the annual Double Decker Spring Run, hosted by the chamber and Baptist Memorial Hospital-North Mississippi. She has served as chairman since 2012.

“Looking at the people who won this award in the past, I just feel honored,” Downs said. “I feel the chamber and Economic Development Foundation do a lot for Oxford. For them to recognize me means the world to me.”

Former House Rep. Noal Akins was presented with the first-ever Lifetime Membership Award from the chamber.