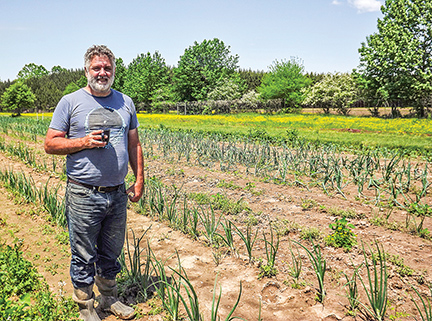 Doug Davis, owner of Yokna Bottoms Farms, takes a coffee into the field to check on crops.

Workers at Oxford’s Yokna Bottoms Farm have been preparing for a busy season by tilling, planting, getting equipment ready and organizing work. Farm owner Doug Davis is looking forward to another year of running and managing his successful Community Supported Agriculture farm with sister, Brooke Davis.

The farm, now is its seventh season, markets organically-grown produce to local residents who purchase “shares” or subscriptions in advance of the growing season. They also sell to customers who attend local farmers markets, and directly to local Oxford restaurants that use fresh locally grown organic ingredients in their food preparation. Restaurant customers include The Ravine, Snack Bar, City Grocery, The Shelter on Van Buren and Oxford Canteen.

Joel Miller, chef at The Ravine, uses the farm items he buys in side dishes and main courses. Shareholders pay $650 annually for a share, and they receive a box of mixed seasonal produce each week, April through November. Half shares are also available.

Davis said he puts all revenue back into the farm as a future investment and hopes to “provide a model for small farm success in Mississippi.” He said crop yields and revenues vary substantially year to year. The better the planting season and weather, the more robust the crop yield, and the more people he has to hire.

Davis might be thought of as the professor-farmer. He runs the University of Mississippi’s doctoral program in education administration leadership, the largest doctoral program at the university.

He approaches farming from a sustainability and scientific standpoint. He said science is “telling us that 90 percent of the food we eat is hurting us.” When these two motives merge, it results in Oxford’s only CSA — a Certified Organic farm.

Davis has had a passion for sustainable farming since childhood when he tended a garden of his own in his native Oregon. His love of teaching is evident in farming.

Each season, he hires intern farm hands. Young people from as far away as France, New Hampshire, Maryland and New York’s Hudson Valley have worked on the farm, as well as locals, including UM students.

Davis believes that working the farm and learning what is required to make small farming a success gives his intern farm hands tools to think about starting their own small farms in the future. He provides food, board and pay to his student charges.

The farm has grown from a half acre in 2010 to 6.5 acres of actively planted land. It is growing incrementally every year, and there is a large acreage set aside for future development.

“The farm has planted as many as 50 different crops in the past,” Davis said. “Of that number, perhaps 40 have been successful. Those that fail are largely affected by cold weather and excessive rainfall.

“If a crop fails one year, the farm may try another more robust variety of the vegetable, especially if it is one that is popular with customers.”

The primary growing season is mid-April to Thanksgiving, but a small number of crops will last through winter. Davis maintains a greenhouse to start the growing process throughout winter. Seedlings are then planted in the field in spring.

Davis’ customers know who their farmer is. If you don’t, you may be getting your food from places like Argentina and California, and from a corporate farm conglomerate that ships by plane.

Being a member-share holder requires more than a desire for locally grown fresh produce. It requires the kind of commitment one would make going from fossil fuels to solar panels as an energy source.

Davis became interesting in farming while teaching in Baton Rouge, Louisiana, where he became familiar with the region’s weather and soil types. After he and graduate student, Daniel Doyle, began having conversations about starting a farm, Davis created his farm in October 2009.

They started by planting one-half acre that season. It was successful enough for Davis to make a long-term commitment to farming.

Doyle eventually went on to pursue another related career, but Doug’s sister moved to Oxford this year from New Mexico with her daughter to help keep things running smoothly.

Brooke Davis now works with farm intern Graham Neeld, a UM psychology student, managing the subscription membership, promoting farm products and helping with whatever needs to be done in the field.

At MSAN, Doyle presented a report on the potential for locally-grown food production in Mississippi. Researched and published by the Mississippi Food Policy Council, the report yielded interesting statistics about how Mississippi’s economy could be affected by a slight shift in consumer behavior.

The report indicates that 90 percent of Mississippi’s food supply is imported, and $774 million of new farm revenue could be generated annually if each resident purchased just $5 of food each week directly from Mississippi farmers. The report says $8.5 billion is lost annually from the state’s economy by the way Mississippians currently grow and eat food.

Mississippi, a state with such vast areas of fertile farmland, has few farming of table produce by small to medium farms. Doyle’s organization works with small farmers, especially organic produce farmers, around the state. One of the key elements of his work is in helping farms get registered as Certified Naturally Grown through the certifying body in Brooklyn, New York.

Doyle said this certification is much less complicated that the USDA Certified Organic registration and less expensive. It’s more affordable for small farmers who could not go through the involved process with the USDA. Yokna Bottoms Farm is the first and only local CSA farm to receive the Certified Naturally Grown designation.

MSAN also educates kids and adults about locally-grown foods. Their program called Mississippi Farm to School caters to elementary school children. Part of the program operates the Mississippi Mobile Farm on Wheels that travels to schools to bring the farm experience to school-age youngsters around the state.

“As communications and marketing manager, I managed three farmers’ markets a week,” she said. “I managed CSA, sold CSA shares, handled communications, including the newsletter and social media, and worked in the fields.” She said loved her time working at the farm.

Chapman said working with vendors is one of her favorite parts of the Oxford City Market job.

“They have become like family to me,” she said. “They are very good people doing very hard work, and they contribute (so much) to the community.”

One of the chief roles of the Oxford City Market is educating consumers, especially children.

“People learn how food is grown and what grows in their area; what it takes to get that bunch of carrots from the field to the table,” she said. “They won’t see things here at the market that don’t grow in our area.”

Trey Bridges, a local chef at My Michelle’s restaurant, had a table at this year’s opening market April 19 that was intended to encourage kids and parents to work together to prepare meals. With the help of his daughter, Elsie, they prepared sample appetizers created from food available from vendors at the market that day. Other kids activities include scavenger hunts for produce items.

Another City Market mission is to make locally-grown foods “accessible to all income levels.” Chapman said people can use their SNAP, or Supplemental Nutrition Assistance Program, cards — formerly called food stamps — at the market.

They also have a matching program, funded through AARP Foundation’s Fre$h Savings program. For example, if someone wants to purchase $5 worth of food on his or her SNAP card, they receive a matching additional $5 for food purchase, up to $10.

The market now has an EBT, or Electronic Benefits Transfer, machine so people can swipe their card, and they are given tokens for the same amount of cash. This is beneficial to vendors because it gives them additional revenue.

Oxford City Market is open every Tuesday from 3 p.m. to 6:30 p.m. at the Oxford community pavilion on University Avenue.

Education is a common thread among Yokna Bottoms Farm, the Mississippi Sustainable Agriculture Network and Oxford City Market. They specifically want to encourage young people to make good food choices. The farm brings in school groups to get hands-on experience about what it’s like to plant, nurture and harvest their own food.

But it’s not all work and no play at Yokna Bottoms Farm. They know when it’s time to celebrate. Twice a year, generally in spring and fall, the farm hosts a public music event. They also host small gatherings at the farm, such as the recent visit of local Oxford favorites “The Wineskins” for a warm-up session before appearing at The Shelter on Van Buren.