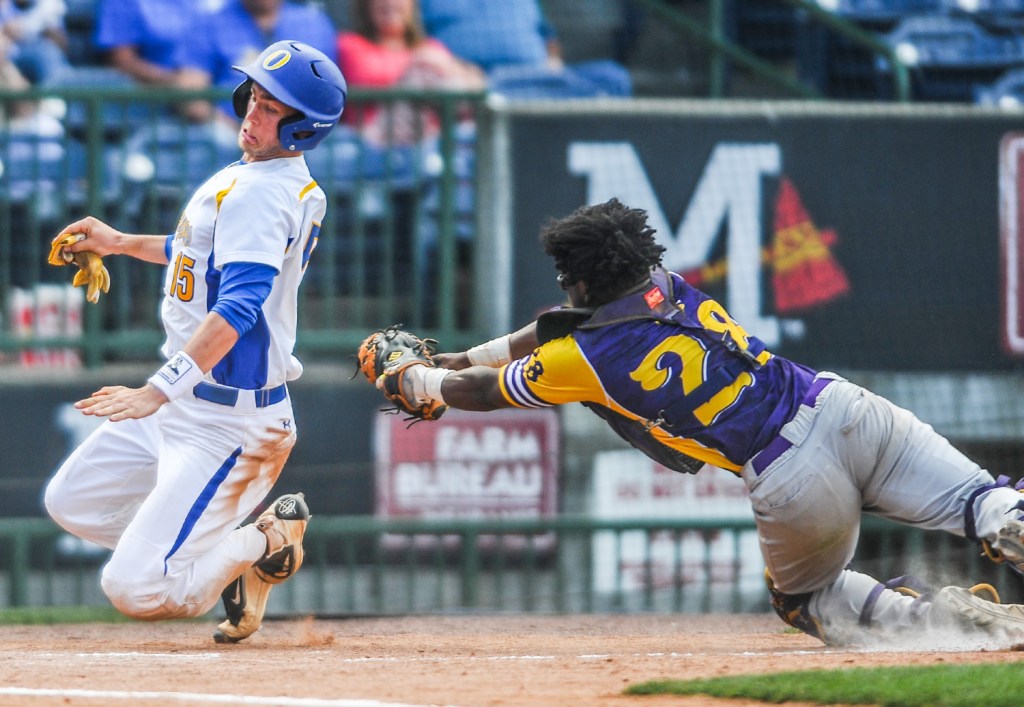 Oxford's Grae Kessinger avoids the tag of Hattiesburg catcher Devin Lang to score in Game 2 of the MHSAA Class 5A championship series at Trustmark Park in Pearl on Thursday. Oxford won 10-0 to win its second straight state title. (Bruce Newman)

As I’ve written a few times this season, the only surprise would have been if this didn’t happen again.

Oxford winning in walk-off, run-rule fashion? OK, maybe nobody saw it going down like that, but the Chargers being the team that once again celebrated a Class 5A championship at Trustmark Park is exactly what most expected. Adding more top-level talent to a team that already owned three members of Ole Miss’ most recent signing class always made a repeat seem like a foregone conclusion.

Oxford was on the radar nationally at the end of last year’s one-loss campaign, but with the Chargers adding a fourth Ole Miss signee in MLB draft prospect Thomas Dillard to a group that was already returning more than half of its starters, expectations soared. Oxford became a consensus top-10 team and started this season as the nation’s No. 1-ranked squad by MaxPreps.

That can create a lot of pressure, especially when you remember the ones actually playing the game are still teenagers, but players and coaches embraced the loftiest expectations in school history rather than trying to brush them off. I remember Jason Barber, another one of those future Rebels, telling me in the preseason it would be a failure if his final season wearing the blue and gold didn’t end the way it was expected to.

Barber (10-2, 1.08 earned run average) showed he was actually human this year after posting that season-long ERA of zero a year ago, but he and fellow ace Houston Roth (10-0, 0.48) were once again a suffocating 1-2 punch on the mound.

All Dillard did in his lone season in an Oxford uniform was lead the team in hitting (.438 average) and set a single-season school record with 16 home runs. Grae Kessinger was his usual reliable self at shortstop while Drew Bianco, Sage Mullins, Duncan Graeber, Preston Perkins, Tag Gatlin, Reed Markle and Carson Stinnett were sparkplugs down the stretch.

But even for a group this talented, it wasn’t always easy.

Head coach Chris Baughman beefed up the Chargers’ schedule, and Oxford lost eight times. Some of those setbacks — one to nationally ranked Buford (Georgia) in the Perfect Game Showcase and another to Houston, who could end up being Mississippi’s 4A champion — were to teams its own size while others Oxford probably wishes it could have back. The Chargers even faced an elimination game against Center Hill in its first playoff series.

“We had to fight a little bit of adversity,” Roth said.

But Oxford rarely stayed down for long, dropping consecutive games just once, a credit to this group’s maturity in addition to its skill. Even one or two losses for a team as hyped as this group of Chargers was could make it start questioning things, but Oxford just played. It wasn’t cocky or arrogant, but it was a confidence that the Chargers were better than just about everybody they were playing and eventually would show it.

“This group came up swinging day in and day out,” Baughman said. “Did we win every game? No. What we did last year was unheard of, but to have played the schedule we played, to have had to live up to the expectations that I had of them … they did an unbelievable job of doing that all year long.”

They’ve done it for two seasons now, and for the first time ever, they can call themselves back-to-back champs.