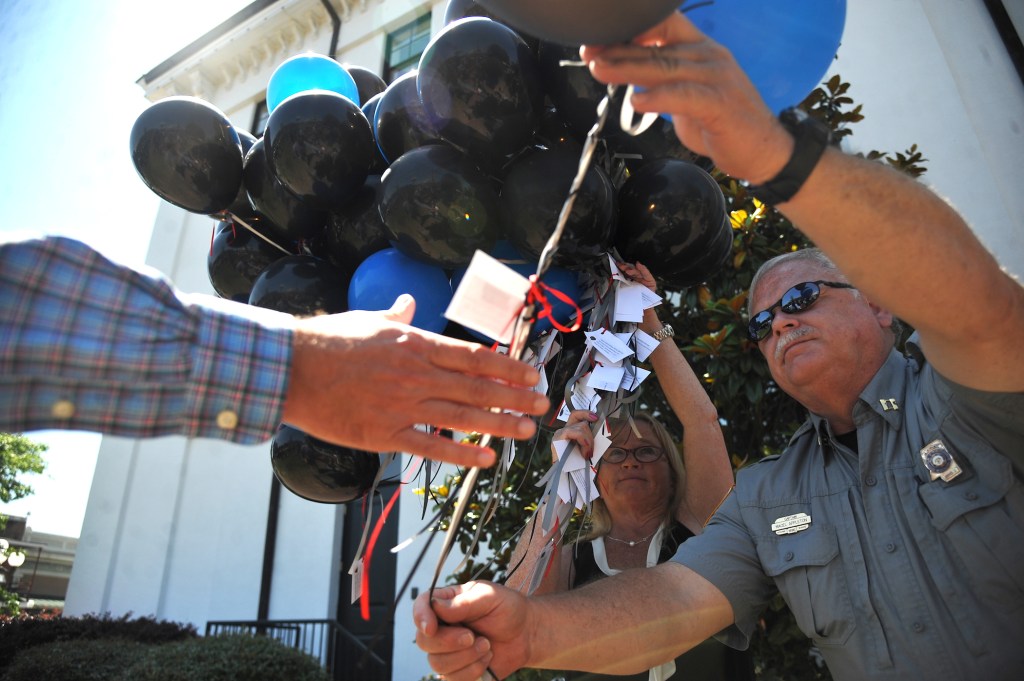 Candy Williams, left, and Macel Appleton prepare for the release of balloons carrying the names of law enforcement officers killed nationwide in the line of duty during Peace Officers Memorial Day outside the Lafayette County Courthouse in Oxford, Miss. on Wednesday, May 18, 2016.

Each year that goes by where representatives from the LOU community’s law enforcement agencies can report there were no deaths or major injuries in their department during the annual Peace Officer’s Memorial Ceremony in Oxford is a good year.

Lee Tartt, 44, of Grenada was killed in February in the line of duty during a standoff in Tishomingo County. Tartt worked for the Mississippi Bureau of Narcotics out of the Oxford office.

Pastor Fish Robinson started off the annual ceremony Thursday on the Lafayette County Courthouse lawn, thanking all law enforcement officers for their dedication in keeping the residents of the LOU community safe, knowing that if called upon to do so, would give up their lives to save another.

“As a preacher of the word, I thank you for standing for our freedoms and keeping America a place where we can worship in the way we see fit to worship,” Robinson said. “Too often, we forget what you men and women do every day.”

Lucie Farese from Jackson sang the national anthem. The Oxford Police Department Color Guard lowered the flag and held a 21-gun salute. Mayor pro tempore and Aldermen Ulysses “Coach” Howell from the city of Oxford and Lafayette County Supervisor and board president Jeff Busby welcomed everyone to the gathering and also thanked all officers for their service.

Guest speaker MBN Agent Terry Spillers talked about Tartt’s bravery and sacrifice on the day he went to Tishomingo County to offer his help in the standoff.

“When he got the call from the Mississippi Highway Patrol asking to send our sniper team, he offered to go with them,” Spiller’s said. “He went to his son’s game and told his wife he felt he needed to be there.”

When negotiations were exhausted, it was decided to send offers into the house where Charles Lee Lambert, 45, held his wife and 10-year daughter hostage with a high-powered shot gun. Tartt offered to go in with the team. He was shot and killed and three other officers seriously wounded. Lambert was also killed. The wife and daughter were uninjured.

“He died a hero, but he was a hero to us long before that day,” Spillers said. “He was our brother and our friend.”

Tartt was honored several times during his career in law enforcement for his bravery. He received the MBN Agent of the Year award in 2011 and in 2012, he was honored for his valor when he entered a home with a man holding a gun.

Tartt was able to talk the man down, rather than use deadly force, and no one was injured that day.

Spillers said he received a letter from an inmate recently, a man Tartt arrested. The inmate said because of the respect Tartt showed him, he is planning to change his life around.

A teacher in Atlanta who attended Tartt’s funeral, went home and was telling a co-worker about Tartt, his sacrifice and the funeral, when one of her young students overheard her. He and his mother lived in a homeless shelter.

“Two weeks later, he and his mother were baptized,” Spillers said.

The ceremony ended with Harley Purdy, an Ole Miss band member, playing taps and the release of 127 black and blue balloons, representing the number of officers who died in the line of duty in the last year nationally.