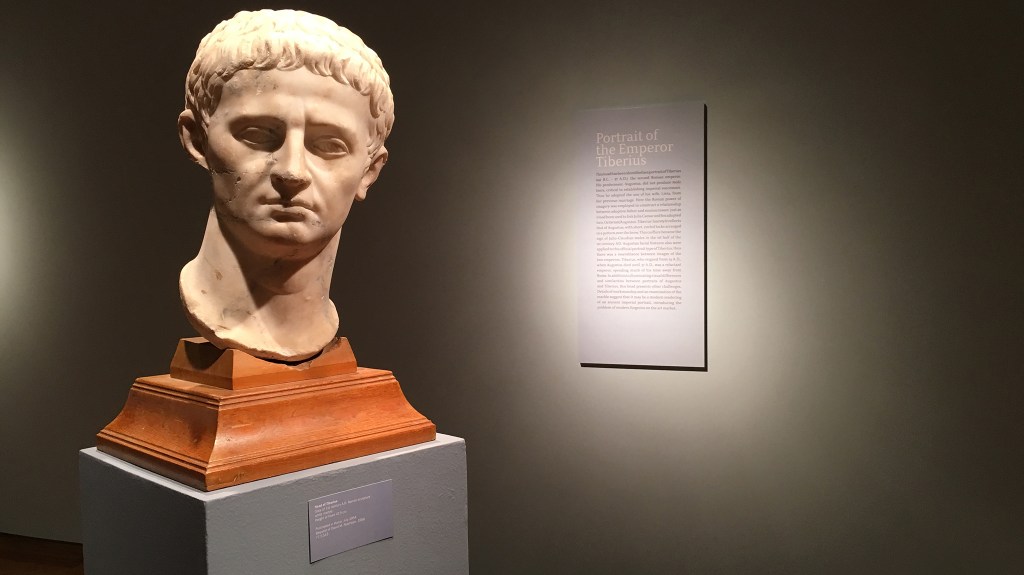 Gods and Men features artifacts from the UM Museum's David M. Robinson permanent collection, such as this sculpture of Emperor Tiberius.

Dozens of ancient Greek and Roman artifacts are coming out of the vault for “Gods and Men: Iconography and Identity of the Ancient World,” the newest exhibit at the University of Mississippi Museum, which debuts Tuesday  with an opening reception.

“Gods and Men” offers a preview of the extent of the David M. Robinson Greek and Roman Antiquities collection, more of which will be on display in the reinstalled Mary Buie wing of the museum.

The opening reception is set for 6-8 p.m. and will be part of the Oxford Arts Crawl. A Greek-themed menu catered by Party Waitin to Happen and Greek-inspired cocktail are available at the reception.

“The UM Museum’s summer exhibition ‘Gods and Men: Iconography and Identity in the Ancient World’ represents a significant moment in the history of the museum’s internationally-renowned Greek and Roman antiquities collections,” Director Robert Saarnio said. “The ‘Gods and Men’ summer exhibition represents a tip-of-the-iceberg view into the 2,000-object collection and is a perfect opportunity for potential supporters to familiarize themselves with the exceptional range and depth of these university cultural treasures.

“We expect this show to be a catalyst that will deepen the interest of our Oxford and campus communities in new and meaningful ways, as we plan for the exciting future that the reinstallation project represents.”

The temporary exhibit from the permanent collection vault highlights more than 200 artifacts, including terra cotta mythology lamps and figurines, coins, Roman surgical instruments, inscriptions and sculptural heads and busts. Most of these items have not been on display for at least six years.

These items differ vastly from the Greek and Roman antiquities on regular display, and this exhibit includes narratives and anecdotes with each piece to provide historical context for it.

“This exhibit has been an opportunity to show the diversity of the collection in material and learning potential while also providing a preview of the visual look and reinterpretation that has been in development behind the scenes,” said Melanie Munns, the museum’s antiques collection manager and exhibit curator.

Munns said she hoped by displaying these smaller items along with magnifying glasses, viewers would be encouraged to look more intently at the artifacts.

“What many people don’t realize is that the coins and lamps also contain these rich narratives and beautiful illustrations,” Munns said. “I hoped that by isolating these smaller objects into groups set in wider spaces, that it will encourage viewers to look closer and stay longer.”

Planning for this exhibit has been a university-wide effort. Munns worked closely with the Department of Classics and student interns for three years to study and reinterpret the items in this collection.

Sarah Sloan, a May graduate from Madison with a bachelor’s degree in English and art history, has interned with the museum for two years to learn collections management, exhibition planning and curating. She assisted in researching, writing text for the artifacts, determining paint colors and organizing the exhibit.

On Aug. 24, the museum will host a panel discussion that focuses on the exhibition as well as the permanent collection of Greek and Roman antiquities. Former museum director and retired classics professor Lucy Turnbull will be the guest of honor. Turnbull assisted in moving the Robinson collection from Bondurant Hall to the museum in 1977.

University Museum, at the corner of University Avenue and Fifth Street, is open 10 a.m. to 6 p.m. Tuesdays through Saturdays.