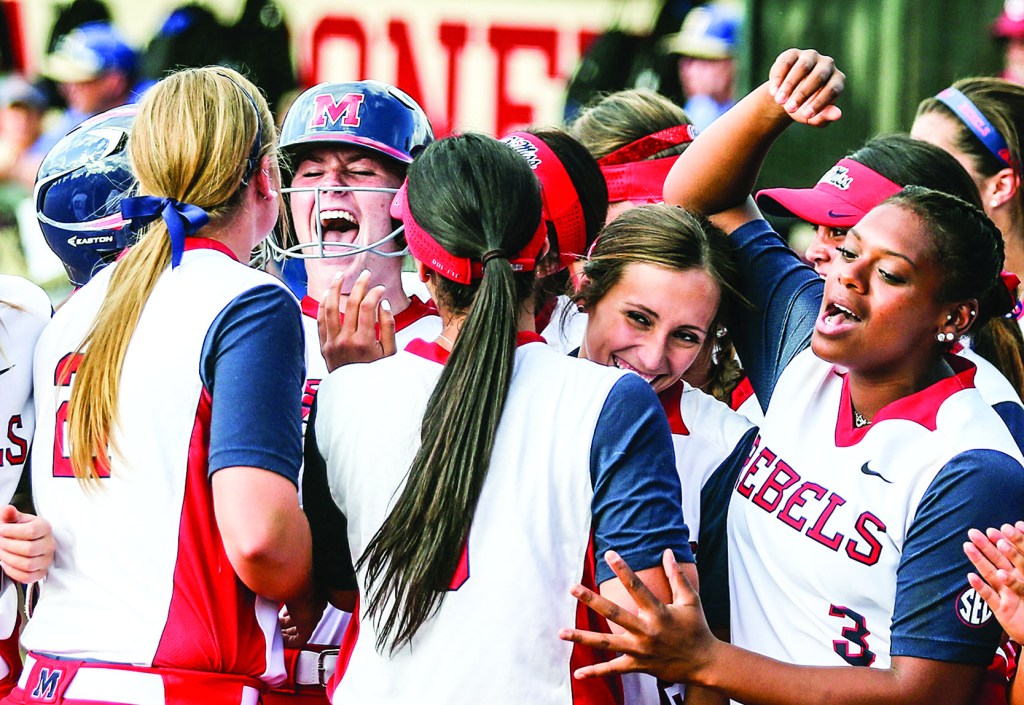 Ole Miss’ Sarah Van Schaik is congratulated by teammates after hitting a three-run home run against Tulsa on Friday in the opening round of the NCAA Tournament in Norman, Oklahoma. The Rebels won 5-1 in their NCAA Tournament debut before winning Saturday’s elimination game over Wichita State to advance to the finals of the Norman Regional today against No. 3 national seed Oklahoma. (Photo by Josh McCoy/Ole Miss Athletics)

The Ole Miss softball team survived to play another day in its season of firsts.

Playing in their first-ever NCAA Tournament, the Rebels advanced to the finals of the Norman Regional with a 4-0 win over Wichita State in an elimination game Saturday in Norman, Oklahoma. After being run-ruled by No. 3 national seed Oklahoma 9-1 in its first game of the day, Ole Miss (41-21) will face the Sooners (49-7) again today at 3:30 p.m. needing a win to force a deciding rematch for the region championship.

Oklahoma is 2-0 in the regional, preceding its win over Ole Miss with a 7-2 victory over Wichita State in its tournament opener Friday night.

Madi Osias fired a two-hitter for the Rebels against Wichita State (36-21) for her 23rd win. The senior right-hander faced the minimum in five of her innings, striking out one and working around two walks to keep the Shockers off the board.

Ole Miss’ offense broke through against Wichita State starter Jenni Brooks in the fourth for a 1-0 lead on Miranda Strother’s infield chopper scoring Hailey Lunderman, who singled to start the frame. The Rebels gave themselves some breathing room in the fifth with RBI singles from Strother and Ashton Lampton sandwiched around a bases-loaded walk by Sarah Van Schaik.

All four runs were earned against Brooks, who took the loss in 4 2/3 innings of work. Lampton and Strother were the only Rebels with multi-hit games.

Friday
Ole Miss notched the first tournament win in school history with a 5-1 victory over Tulsa in the regional opener Friday.

Ole Miss got to Sill in the third, using a walk and consecutive singles, the second from Lampton scoring Haley Culley, to take a 1-0 lead. Van Schaik provided the big blow a batter later with a three-run blast to center for just her second home run of the season. The Rebels padded their lead in the fifth when Lampton scored on an error.

Tulsa (35-20) got on the board in the sixth with Julia Hollingsworth’s RBI double, but Osias retired five of the last six batters she faced to put the Rebels through in the winner’s bracket. Lampton and Lunderman each had two hits for Ole Miss while Maggie Withee accounted for half of Tulsa’s hits.