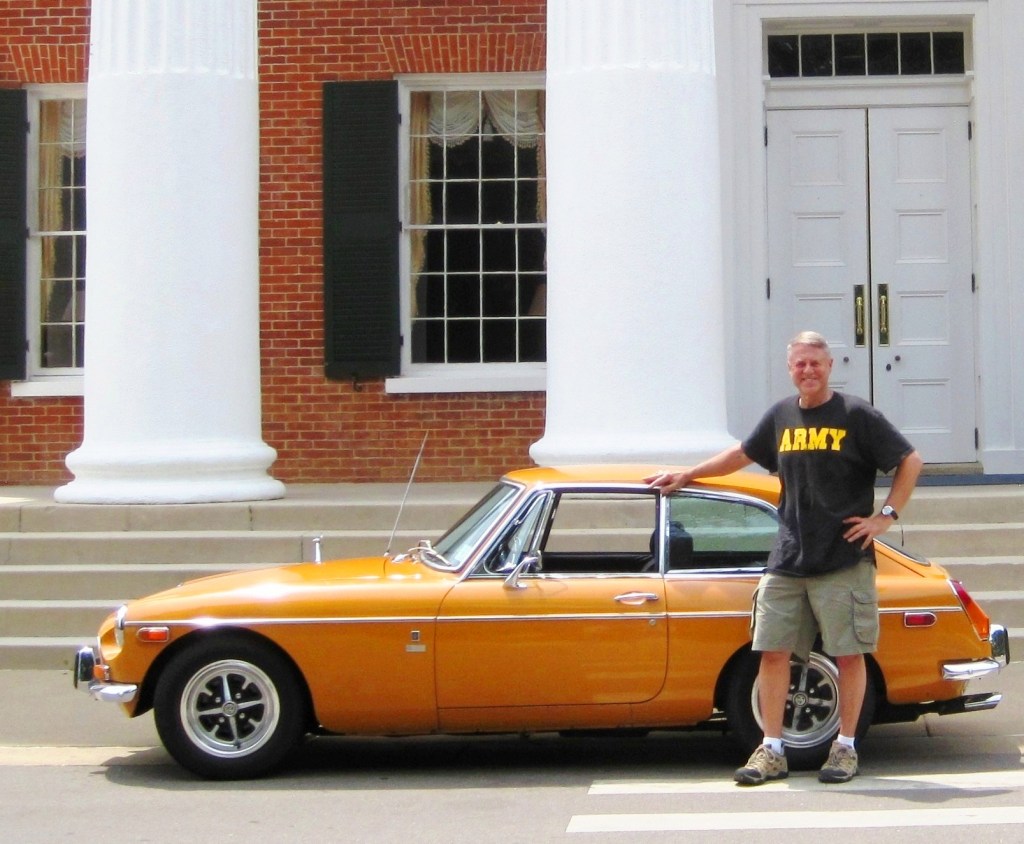 Have you ever had a special car that you traded or sold and years later, perhaps now, wish you had back?

Some of you may recall that when my Scottish fiancé broke our engagement a few months before we moved to Scotland forever in April 2011 and I idiotically decided that I needed a “new life” and traded four cars on Nov. 23, 2011, for a new 2012 KIA Soul.

One of those cars was my beloved 1971 MGB/GT that I bought new in St. Louis, Missouri, a year after returning from Vietnam, rationalizing: after having both hips replaced in May and August 2011, it was too difficult getting in and out of the MG; being very introverted, driving the MG drew way too much attention; something was always breaking down on it and required my constant attention; although my first new car, keeping it all those years, a near perfect one-owner MG, quite rare and valuable … it was just sitting in my garage collecting dust, So, injured heart overruled wee brain! Y’all don’t do this at home.

As time passed and my body, mind and heart healed, I was relieved that said fiancé wasn’t in my life, but was agonizing over trading the MG – like eating my guts out, and asked God if it was right, to please let me get the MG back or scythe it from my mind. Not knowing where the MG was actually gave me some comfort — until a guy who owned a small GM dealership in Alabama tracked me down and sent an email informing me that he was the new owner of my MG and could I give him some information about it?

Knowing where my MG was only added to the agony of missing it and driving past there, a large knot formed in my gut. This was my first new car, my daily driver, which I babied, on which I honed my mechanic skills, broke down way too often, but accumulated years of memories, good and bad. I owned this car before I was married, got engaged in it, knew where every scratch and dent came from, and as a GT, it had a decent back seat and cargo capacity and my three sons Stephen, Scott and Shane fit in it, albeit snugly, when they were squirts.

My misery became almost unbearable and one day I dug up the guy’s email address, put my guts in a note to him describing what the MG meant to me, why I traded it, asked if he had ever let go of a special car and dreaded it, and could I please buy it back? A few days later, he wrote that he loved my story, was amazed that I was the only owner, and would gladly sell it back to me. Whew!

He quoted what he thought was a fair price, and even though it was double, the amount I paid for it new. Being in no position to haggle, I thanked him profusely and said OK. After acquiring a bank loan, early on a beautiful Tuesday morning, April 22, 2014, son Stephen drove over from Birmingham, picked me up here in Oxford, and we returned to Alabama to get my old/new MG back — a day I will never, ever forget.

Driving into his dealership, after years apart, there was my old friend gleaming in the sun in its original bronze-yellow (orange) paint. Greetings were exchanged, I handed over my check and a bottle of Roeder Champagne to he and his wife, did some paperwork, and looked over my car. At first glance it appeared OK but on closer inspection, I noticed that the door seals were torn, the bonnet (hood) latch was broken, emergency brake didn’t work, and there was no oil on the flamin’ dipstick! What had he done?

The MG had been sitting inside all winter and I knew there was a leak from the oil pan, so I topped it off with oil and attempted to start it. The choke cable was broken, making it difficult to start. The twin SU (Skinners Union) carbs were badly out of adjustment and needed topping off with oil. It was obvious the guy knew GM cars and trucks, but nothing about a fiddly British one, and he admitted such.

Driving the MG two and half hours back to Oxford began to make me more than nervous, but he assured me it would make it. I had the MG in perfect working condition when I traded it, trusted my work, and figured he hadn’t messed it up that badly. A block after leaving his dealership, I pulled off to the side of the road, adjusted the carburetors, hugged and thanked Stephen, cinched my seat belt, said a huge prayer and pointed west.

The first few miles had me sitting on pins and needles as I watched the gauges and listened intently to the sounds of the car. But after 30 minutes or so, I relaxed as the MG was humming along nicely and allowed the joy of having my MG back wash over me. With a big smile on my face, I settled into the sweetest drive I have ever had in my old/new 1971 MGB/GT all the way back to “Camelot” Oxford. Thank you, God.

Stay tuned to my June column where I will inform you what has happened after getting my MG home again. Peace Out!

Steve Stricker received his Ph.D. in counselor education from Ole Miss. He can be reached at sstricke@olemiss.edu.