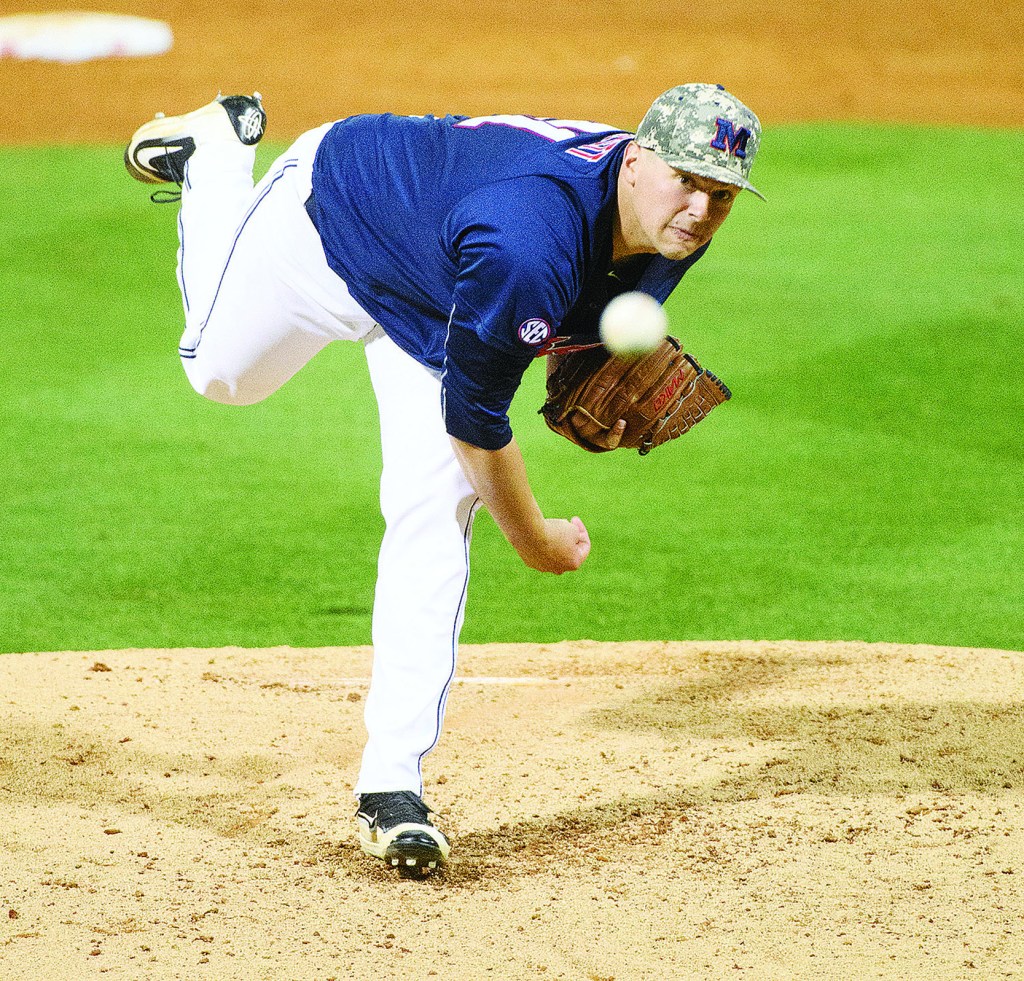 HOOVER, Ala. — If you are not one of the top four teams to earn a bye in the Southeastern Conference baseball tournament, this week could be very long.

Teams that have to start on Tuesday could see themselves playing either five or six games in a span of six days if they make it to the championship on Sunday afternoon. Go 3-0 the first three days and you get Friday off. End up in the loser’s bracket and you can kiss the day off goodbye.

Ole Miss is one of those teams that must navigate the extraneous tournament bracket, but one weapon the Rebels have at their disposal is their pitching depth.

A total of seven pitchers saw starts in SEC competition, including the original weekend trio of ace Brady Bramlett, Sean Johnson and Chad Smith. Johnson and Smith saw their spots taken by the likes of James McArthur, David Parkinson, Andy Pagnozzi and even closer Wyatt Short.

It will take all seven of those arms plus more out of the bullpen for the No. 7-seeded Rebels to have an extended stay past Tuesday’s single-elimination matchup against No. 10-seed Georgia (1 p.m., SEC Network).

“We’ve had a lot of different guys take the mound,” Ole Miss pitching coach Carl Lafferty said before Monday’s practice at Hoover Metropolitan Stadium. “You feel like you’ve got a core of guys that can give you a quality start, and I feel like our bullpen is fully developed. I think to win the tournament, there’s going to be guys that step up and move forward as far as what they’ve been doing.”

Bramlett is getting the start against the Bulldogs just four days after taking on Texas A&M last Thursday. After missing out on the tournament last year due to the Rebels’ one-and-done performance, Bramlett is ready to go on short rest.

“I feel good, the body feels good,” Bramlett said. “Honestly, it’s kind of going back to high school ball. We had a five-man rotation, so it’s just going back to that old routine. (Ole Miss) Coach (Mike) B(Bianco) came to me (Sunday) and asked how my body was feeling and if I was ready to go. I said, ‘Yeah, I’m ready to go.'”

Bramlett faced the Bulldogs on May 6 in the Rebels’ 6-4 win but had a short outing. The right-hander went four-plus innings, giving up four runs, all earned, on eight hits while striking out five and walking two.

He did a short bullpen session with Lafferty on Sunday before Ole Miss headed over to Hoover on Monday. Bramlett worked on spotting and command but not too much as to not overexert before Tuesday’s key game.

“A little bit,” Bramlett answered when asked if he was surprised about getting the start. “This will be my first time to pitch in the SEC Tournament. … (Georgia) is an aggressive swinging ball club. For me, that was one of my outings where I struggled with location, which is odd for me. I feel confident going into (Tuesday) as I feel back to my old self.”

If Bramlett has another early exit, the bullpen will be asked to provide a heavy workload, but it is something they’ve had to do all year. Freshmen Pagnozzi, Brady Feigl, Connor Green, Andrew Lowe and Dallas Woolfolk have all given key innings out of the bullpen, something they may not have expected their first year in a Rebel jersey.

Green boasts the best earned run average out of the bullpen at 2.10 in 30 innings pitched. Feigl is right behind him with a 2.50 ERA and Woolfolk next with a 2.51 ERA.

Short, who has a career-best 11 saves this season, has a 1.75 ERA as the Rebels’ shutdown man. He and Will Stokes have provided a good one-two punch when Ole Miss has needed it in the final stages of games.

“We knew that we liked them. We knew that the freshmen group of arms had a chance to be really good,” Lafferty said. “Some guys have developed more quickly, but I certainly knew that if we were going to be a team to have a good year, we needed those guys to step up and jump in the fire and they have.”