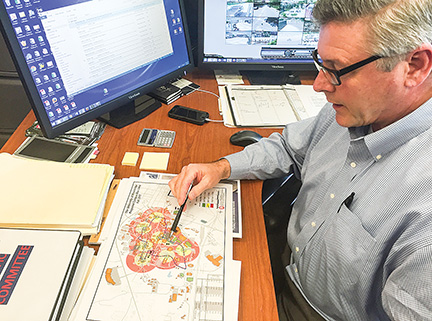 The spring semester has come to a close at the University of Mississippi, and as students relieve their parking spaces for the summer, Mike Harris, director of parking and transportation, is already anticipating their return.

Harris, who is ending his third year in the position, said his future strategy stretches past the 2020 school year. He previously served as the parking director for Mississippi State University for 14 years.

During fall 2014, the semester of Harris’ arrival, enrollment at the University of Mississippi surpassed a record-breaking 23,000 students. The 2014 incoming freshman class grew 6.5 percent from the previous freshman class. It was the biggest freshman class ever recorded for any Mississippi university.

“When I toured through campus for the first time, the first thing I noticed was that the there were more residential beds than parking spaces,” he said. “It was a problem and an opportunity.”

The year prior to his arrival, tensions reached a boiling point between students and faculty because of stricter parking restrictions, in hopes of “pedestrianizing” the Ole Miss campus. The implemented operations also included more restrictive policies for on-campus parking during Saturday football game days.

“There simply weren’t enough areas of parking for commuters and campus residences, and that could be catastrophic for the future development of Ole Miss,” Harris said. “We needed a solution that minimized unorganized traffic while anticipating the future growth of the university. It wasn’t as simple as relocating parking assignments.”

Though Harris commends the effort to enforce a policy to minimize unorganized on-campus traffic, he admits the quick solution perpetuated the problem. He also believes there was an overall lack of communication between parking violators, enforcement and the administration itself.

“When I arrived, parking and administration worked separately from the University Police Department,” he said.

Harris said the most prominent parking violators were those of “commuter” parking assignments, since the majority of UM students live off campus.

Anticipating the influx of future freshman classes and the growing demand for on-campus residences, Harris said the parking solution resided in a “master plan” that could illustrate the university’s future growth. “If we’re planning just a year ahead, we’re already behind,” he said.

Harris said his strategic parking solution is a direct extension of UM’s Master Plan. In 2009, the university’s Department of Facilities Planning joined Sasaki Associates, an international interdisciplinary design firm that provides sustainable strategies for landscape architecture and planning solutions. In collaboration, the 2020 plan was created.

According to the Department of Facilities Planning website, a master objective of the 2020 plan is to create a “pedestrian-focused campus.”

Harris said the plan is a vision to maintain the rooted culture of the Oxford campus, while anticipating the compromise of its natural landscapes that will “inevitably” come with growth. He said the university’s objective to create open space is why the previous parking administration began to “decentralize” parking assignments.

The decentralized parking system reduces parking spaces along the interior of the campus to encourage students and faculty to use the university’s biking routes and transit systems — Rebel Pedals, Oxford University Transit shuttles and the park-n-ride services.

Harris believes the plan will release the strain of campus traffic, allowing better access to academic areas. The first development of Harris’s plan is called the “internal bus loop” that will be introduced in the fall semester of 2017.

“If everything goes according to plan, no one will ever have to wait any longer than five to seven minutes,” he said.

Harris said the newly implemented transit system would include new OUT buses and transit hubs. “We’re making a commitment to adjust the systems to the time of service for each lot,” he said.

Although Harris and his administration have created a solution for campus traffic, he said none of it would work successfully unless the administration properly communicates the new regulations to existing students, faculty and incoming freshman.

“My first obligation as director was to create the proper orientation presentations for incoming freshman families,” he said.

Harris said parking is a vital, often overlooked adaptation, for incoming freshman. During the first freshman orientations of his tenure as parking director, Harris orchestrated parking session meetings for incoming parents and students.

He said he needed a way to show freshman families that it was possible to reach most academic facilities and frequented destinations on foot. He believes that, since most UM students attend from rural areas, they aren’t as familiar with the importance of parking restrictions and violations.

“Most students graduate to move to cities who rely on daily traffic enforcement,” he said. “Ole Miss is an education and learning institution, but not everything you learn is in the classroom.”

David Babb, a senior finance major, transferred to UM from the University of Illinois in 2013 after his freshman year. He lived in Minor Hall, an on-campus residential hall, during his sophomore year. The Chicago native said his car stayed parked the majority of his on-campus residency.

“I wasn’t familiar with the layout of Oxford, so I wasn’t in a hurry to go roam around on my own,” he said. “I drove my car the most going back and forth from school.”

Since Babb didn’t have any mutual Ole Miss attendees from his hometown to carpool with to Oxford, he felt having a vehicle was a personal necessity.

But Harris said there are too many parking spaces occupied through an average day of class at UM. He said each individual parking spot should generate “turnover” throughout a single day. He said on-campus parking spots should turnover at least three times a day.

“It ultimately affects the cost of distribution fees when we calculate the turnover from each semester,” he said.

Harris said the lack of turnover misconstrues the distribution average for parking tags that raises the cost and value.

Christian Osso, a sophomore integrated communications marketing student, said he missed his opportunity to purchase a commuter permit this year. He said he wishes he had been more aware of the parking changes taking place.

“It was way easier getting a residential parking permit than commuter,” he said.

Since he wasn’t able to purchase a commuter permit as his primary option, he decided to apply for the OUT park-n-ride shuttle service provided as a secondary option. Osso parks his car at the Jackson Avenue Center parking lot across the street from campus. He enjoys avoiding the drive-time campus traffic cluster that occurs when students get out of class.

Though many traditional commuters perceive UM’s various transit options as current inconveniences, Harris said the decentralization will help return more spaces back to campus as the university continues to grow.