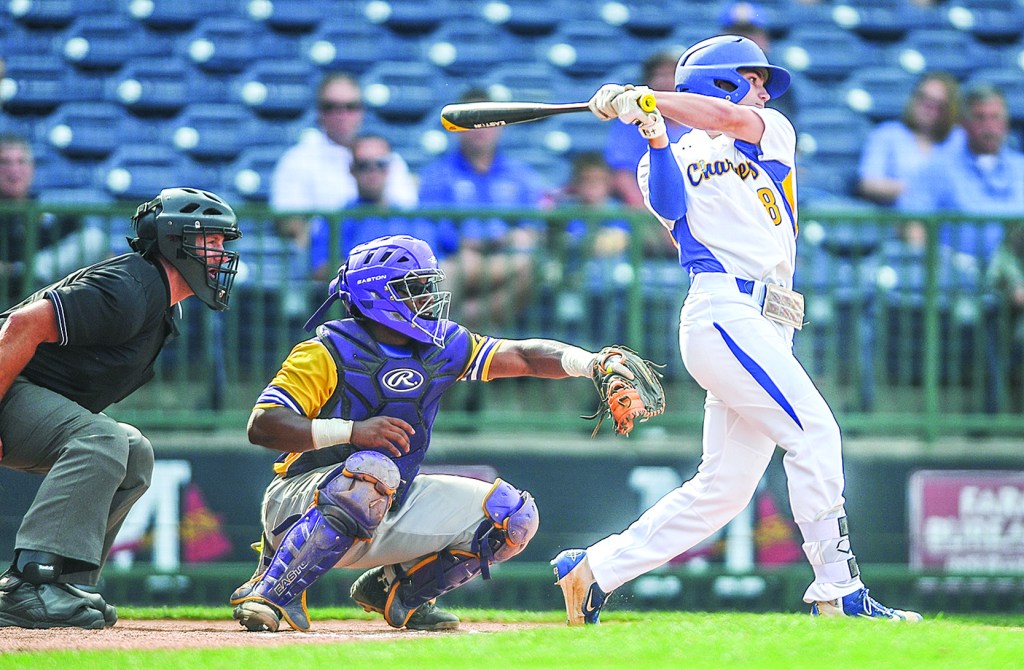 Oxford’s Sage Mullins bats against Hattiesburg in the Chargers’ state title-clinching win Thursday. The senior outfielder hit .392 in the playoffs, one of several key contributors for Oxford outside of its big 4 down the stretch. (Photo by Bruce Newman)

After another game where his star players once again starred in Oxford’s latest state title-clinching victory, head coach Chris Baughman heaped his usual amount of praise on them for their contributions.

Once the topic of conversation shifted to his players not named Thomas Dillard, Houston Roth, Jason Barber and Grae Kessinger, Baughman also voiced a compliment he insisted was truth rather than a puffy breath of coachspeak.

Yes, the quartet of Ole Miss signees as well as sophomore second baseman Drew Bianco, who’s already committed to LSU, led Oxford in its run to its first-ever repeat as MHSAA Class 5A champions, but the Chargers’ other regular contributors could play a little bit, too.

Senior outfielders Sage Mullins and Preston Perkins and first baseman Duncan Graeber rounded out Oxford’s everyday lineup. Others eventually carved out a niche to complement the star power on perhaps the most talented team in school history.

While Dillard (16 home runs), Bianco (6) and Barber (5) supplied the pop, Mullins became the Chargers’ hottest hitter out of his ninth spot at the end. Mullins hit safely in eight of Oxford’s nine playoff games, finishing with a postseason average of .392, and went 3-for-5 with two RBIs in the championship sweep of Hattiesburg.

“It was great to know we contributed a little I guess,” Mullins said. “You’ve got to have nine to win a baseball game. It can’t just be four people that win the game.”

Perkins was a speedy defensive presence in his lone season as the Chargers’ everyday center fielder, going all 36 games without making an error, while Graeber, a junior, overcame a slow start to break in as the permanent answer at first after Ben Bianco suffered a season-ending shoulder injury early in the season.

“(Graeber) struggled at the beginning of the year. Struggled bad,” Baughman said. “He was hitting below .200 and struggled defensively, but he kept working and kept making some adjustments and got back to where he was a little comfortable. He kept working defensively over there, and at the end of the year man, he was as good as anybody we had in the lineup.”

After Baughman tried multiple options at designated hitter the first half of the season, fellow senior Tag Gatlin eventually gave Oxford stability there. Gatlin finished with just nine hits but was putting together some of the Chargers’ best at-bats out of the No. 8 spot down the stretch to set the table for the top of the lineup.

“In the eight hole, you don’t need much,” Baughman said. “You just need someone to turn the lineup over, and he did that game in and game out.”

Running and throwing
Senior reserve Jack Clemons filled in in right field when Roth pitched while Blake Parham and Giles Lamar specialized as pinch runners. Lamar scored 19 runs, tied for fourth-most on the team, and used his speed to help Oxford survive a scare from Grenada in the North Half opener May 11, scoring all the way from second on an error on the infield to give the Chargers a 2-1 win in extras.

When Roth and Barber weren’t available, Carson Stinnett (2.80 earned run average) and Reed Markle (1.73) took the ball and went a combined 6-5. Markle looked more like an ace than a third option in his final outing, allowing just two hits and fanning nine in a 14-1 win at Ridgeland earlier this month that sent the Chargers to North Half.

“Sage, Blake’s leadership, Jack Clemons’ role playing right field and courtesy running from time to time,” Baughman said. “Giles Lamar, how big was he all year long for us? Scored some winning runs for us and got some big stolen bases. Reed Markle and Carson Stinnett on the mound. Nobody talks about the two-hitter (Markle) threw out at Ridgeland.

“Yeah, we’ve got guys that are going to carry us. We know with 7 (Barber) and 19 (Roth) on the mound for the last three years, we were going to be tough to beat, but we’ve had guys just constantly step up. That’s what kids do in big-time programs.”

“It means a lot (to contribute personally), but at the same time, we’re not playing for the number on our back,” Graeber said. “We’re playing for what’s on (the front of) our jersey. Any way that we could contribute to help the team, we were going to do it.”