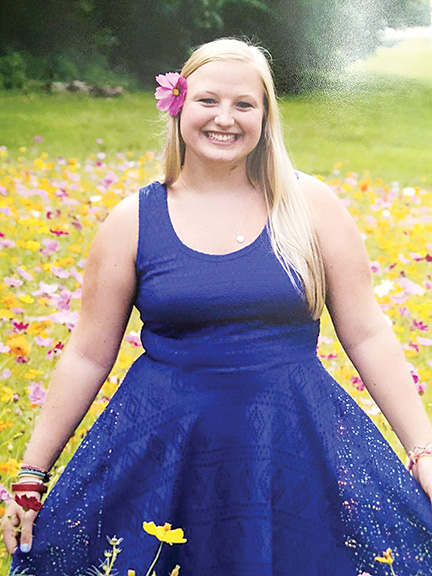 Submitted A scholarship has been created honoring the memory of UM student and Alpha Omicron Pi sorority member Carli Sears, who was killed in January by a hit-and-run driver in West Virginia.

“She was ridiculous. If I had to explain her to someone that never got the chance to meet her, that’s how I’d do it,” said Lydia Hall, describing Carli Sears, her best friend and sorority sister.

Sears was a UM junior at Ole Miss, active in Alpha Omicron Pi sorority. In January, she was killed by a hit-and-run driver in her West Virginia town.

“She was honestly the funniest person I’ve ever known, and she didn’t care what anyone else thought of her. If she thought fitting her entire fist into her mouth in a restaurant would cheer you up, then she would do it, regardless of how people would look at her. She was the greatest friend you could have,” Hall said. “She’s the most beautiful person I’d ever met.

“I remember thinking they just got her identification wrong, and someone would call to tell me it was a mistake at some point. But obviously it wasn’t a mistake.”

Mackenzie Quick, another friend of Sears, said the news hit her hard.

“I screamed. I cried. I got physically ill from the thought of Carli being gone,” she said. “The hardest part of that entire day was breaking the news to the rest of our friends. I had to call almost a dozen girls and tell them that one of their best friends was gone. Having to hear your friends’ hearts literally break into a million pieces over the phone is not something I would wish upon anyone,”

Katie Ferguson, a senior and close friend of Sears, said her experience was similar.

“I remember feeling just a complete shock, which lasted for several days after,” she said. “I could not even imagine coming back to Ole Miss without receiving one of the giant hugs I had received on the first day back to class for the last four semesters.”

“She knows more of my secrets than anyone,” she said. “She was a source of laughter. She was always equipped with a joke or ridiculous comment that could bring a smile to my face.

“She was my voice of reason. She knew when one of my latest ideas or decisions was stupid, and would not hesitate to tell me. She was my best friend. No one will ever replace her or fill the void that has been left in my heart, because she is irreplaceable in every sense of the word.

“Carli has shone light on hundreds, probably thousands of people. She’s changed the lives of people who never even had the privilege of meeting her. I think her lasting impact has been that of love and friendship.”

Ferguson believes that the tragedy brought in a source of light for AOII.

“I think Carli and the accident had a bonding effect on AOII,” she said. “I have been able to watch everyone come together and experience a sisterhood I had not seen yet within my four years. It was obvious the effect Carli had on every member of AOII.”

Sears’ lasting love and impression gave AOII members an idea that would ensure her legacy lives forever. Shortly after the accident, AOII actives decided to start a bowling philanthropy for Sears and endow a scholarship in her name, which will be given every year to a deserving AOII member.

“I think it’s a great way to keep her memory going in AOII,” Hall said. “Me, her roommates … met with a couple of advisors a few times to decide on the scholarship, a T-shirt and the philanthropy event. I don’t think one single person came up with the idea. It was a group thing.”

Ferguson said the event was a tremendous success, raising thousands of dollars for Sears scholarship.

“Carli was a great friend to so many, and the best friend to dozens,” Ferguson said. “I think her having such a large impact was the reason why so many people wanted to do something great to honor her life.”