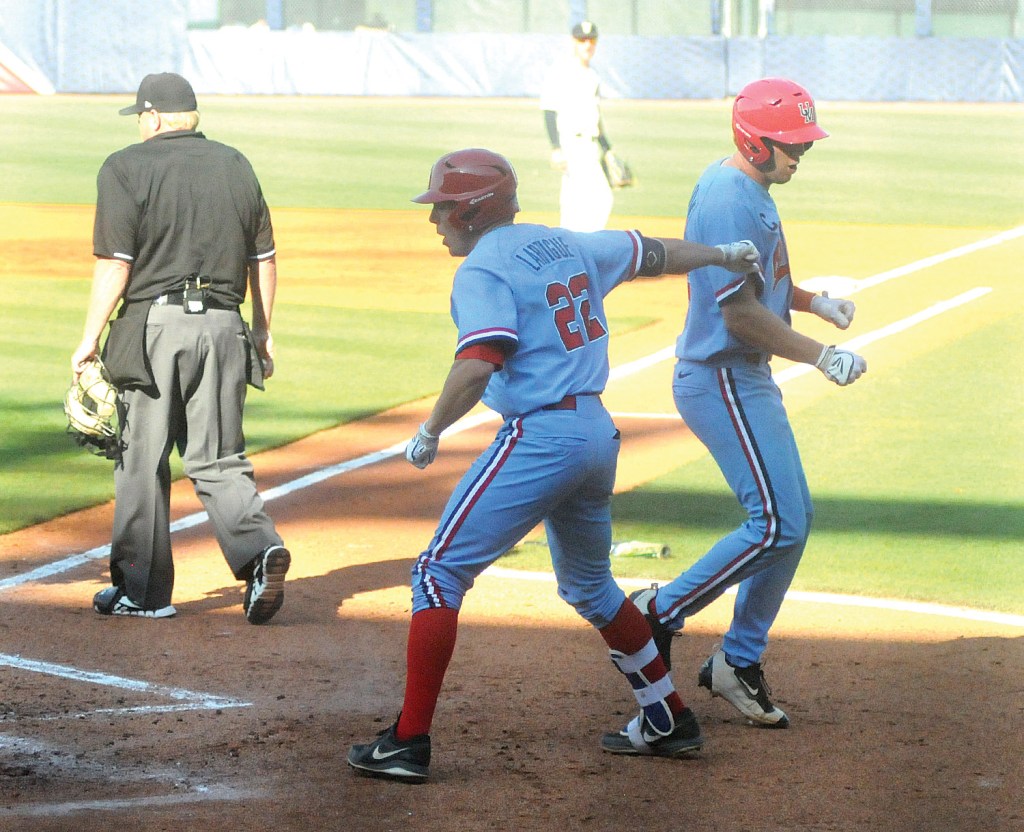 Ole Miss’ J.B. Woodman celebrates with teammate Henri Lartigue (22) after hitting a solo home run in the third inning against Vanderbilt in the Southeastern Conference tournament Thursday at Hoover Metropolitan Stadium in Hoover, Alabama. The Rebels won their third game in as many days with a 12-9 victory to advance to the semifinals Saturday. (Jake Thompson)

HOOVER, Ala. — There is something special happening in central Alabama.

Ole Miss is one win away from playing for a Southeastern Conference tournament championship after defeating Vanderbilt 12-9 on Thursday at Hoover Metropolitan Stadium.

The win advanced the Rebels (43-16) to Saturday’s semifinal round. The 3-0 start in the tournament earns them a day off as they await the winner of Texas A&M and the Commodores (43-16), who play in an elimination game today at 3 p.m.

It is the first semifinal appearance by Ole Miss since 2010.

It got a little interesting late in the ninth inning with Vanderbilt scoring four runs to put a little pressure on the Rebels, but closer Wyatt Short came in to get the final out and send Ole Miss forward.

“In the end, you look how close it was and look at the box (score), and I don’t think it should take away how well we played,” Ole Miss coach Mike Bianco said. “This is just one of those days where you save some pitching and go after people.”

For the third straight day, the Ole Miss offense roughed up a team’s ace as Vanderbilt’s Jordan Sheffield was knocked around for nine runs, five earned, on six hits while striking out six batters and walking three.

The middle of the order was huge once again for Ole Miss as J.B. Woodman, Henri Lartigue and Colby Bortles went a combined 6-for-15 with six runs batted in. Woodman hit his SEC-leading 14th home run of the season in the third inning.

The Rebels plated four runs in the second inning and used Woodman’s home run to take a 5-0 lead after three innings. They tacked on four more runs in the fifth inning, another in the sixth and were staring at a 10-0 lead midway through the sixth inning.

“Our guys are just going out there and having quality at-bats,” Lartigue said. “It seems like we are getting some pitches to hit and guys like J.B. and Colby, when they are getting hitter’s counts, they are able to put some good swings on balls. When a guy like Sheffield is on the mound and gives you pitches to hit, you got to take advantage of it.”

at least 10 runs after seven innings. The Rebels were close to an early exit, but Commodore center fielder Bryan Reynolds hit a solo home run to make it a nine-run deficit.

The Commodores added three more runs in the inning to make it a 10-4 game.

Three of the Rebels’ 12 runs were unearned and all of them came in the top half of the fifth as Vanderbilt played sloppy baseball with catcher Jason Delay charged with a passed ball to allow Errol Robinson to reach first after a third strike. A throwing error by second baseman Alonzo Jones allowed Robinson to score later in the inning.

“We played like crap,” Vanderbilt coach Tim Corbin said of the fifth frame. “We let a strikeout get to the backstop. Should’ve caught a fly ball, could’ve turned a double play. There’s four (runs) right there. Trying to walk and you throw it in the crapper behind the catcher. It’s unfortunate.”

With a lot of offense behind him, James McArthur gave Ole Miss five-plus innings of three-run, five-hit baseball to earn his sixth win of the season. McArthur had not had an SEC start in a couple weekends but got the nod over other potential starter Chad Smith, who will start Saturday’s game.

“What was working was whenever I got ahead and attacked the zone early,” McArthur said. “I put myself in good situations to make a good sliding pitch late in the count.”