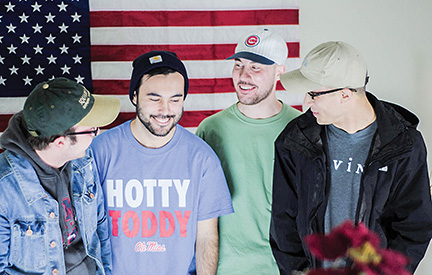 Photo by Walter Lyle The band members look forward to their future together, hoping to get a record label and continue playing shows.

While many students are attending baseball games, grabbing a drink on the Square or studying at the library, four Mississippi and Tennessee natives are living out their passion for music.

Pinebox is a local student band that formed in January. Even with the recent start, the band has gained a lot of exposure. They have played five shows and currently record at Rebel Music with Travis Wilburn, a sound engineer with degrees in both business and music.

Band member Marcus Umfress, 21, said the group has been writing music since last November, but didn’t meet to play until January.

“We all sing, but Caleb is the lead singer,” said Umfress. “I sing a couple of songs with him.”

Anger, pain, happiness and nostalgia are all feelings conveyed through Pinebox’s loud rock, alternative sound. Original lyrics, intense guitar strumming and passionate band members have only just tapped into their talent. Umfress said none had been in an alternative music band before, so they figured they could do it.

Umfress fell in love with music at age 7. He used to dress up as a cowboy with a toy guitar and sing George Straight songs, but his love for rock came from listening to the Red Hot Chili Peppers and the classic rock his dad played.

Christmas lights are strung around the walls, a single rug lays on the tile floor with a drum set on top of it, and two mattresses lean against the wall to suppress sound. This was the original practice area inside Umfress’ three-bedroom home.

The studio at Rebel Music, although similar to a bedroom space, is full of gadgets and a desk full of buttons to help improve the band’s sound. Travis Wilburn is their right-hand tech man who makes sure they produce professional music.

“He disciplines us,” band member Jon Michael Walton said. “Even the scratch stuff we have done has come off better than some professional bands that get paid.”

It only took being together for four months to hit songs in the double digits.

Their demo can be found online at pineboxms.bandcamp.com. “Right now, our demo is online, and we’re just taking it as it goes,” said Umfress. “People have to like your music to want your stuff, so I guess it just depends on our success. Some groups take three to four years to get off the ground, but some can write for six months and become an instant success locally or regionally.”

With the uncertainty of instant success, the band started out essentially working for free, with hopes to sell the album and T-shirts. Umfress said they were “broke as (expletive),” but hoping their connections would help things take off.

The other band members have connections through Delta Psi fraternity, Bouré, Square Books and other bands throughout northern Mississippi.

Umfress said Pinebox has been making shirts to give to fans, and they have made money on past gigs. At Shelter, a venue with an ambient setting, Pinebox was paid $110 to play.

“The environment was chill, and it showed us how to play somewhere we didn’t necessarily like the setting,” Umfress said. “The money also meant we didn’t have to pay for gas to go to Birmingham for another gig.”

From starting out playing an acoustic set for 40 people on a back porch in Taylor, the band moved from the hipster vibe to playing for 70 to 80 people lined up, moshing and slinging beer.

“People were jumping all over the place,” Umfress said. “We got an amazing response and some of the biggest critics that we know, didn’t give us any criticism.”

The positive support has led to an influx of invites for the band. “We may actually have to turn down some shows,” Umfress said. “We’ll end up with some type of record deal off of all this, even though we don’t really know how it all works. We’re excited.”

Pinebox recently played in two shows:  May 14 at Brofest and May 17 at a house show in Oxford with six bands.

“A bunch of local bands around the Southeast have put together this annual show,” Walton said about Brofest. “Last year, over 200 people from four different states were there, and we get to play with national touring acts.”