Vinyl records are back, but are they here to stay this time? 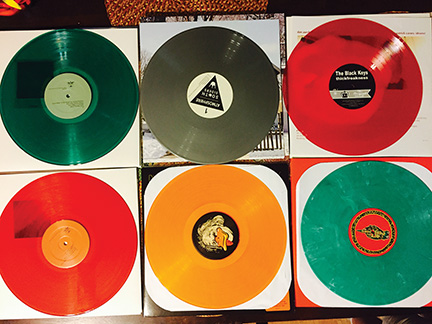 anthony dicandia Vinyl records are a big hit right now, but given the current digital climate, music buffs wonder if they will be around for the long haul.

In 2015, for the first time ever, music streaming revenues (including paid memberships or subscriptions) surpassed $2 billion, making it the highest grossing market (34.3 percent) in the music industry — slightly ahead of digital downloads (34 percent).

Their growth in popularity makes sense. Giving people access to endless catalogs of music at the touch of their mobile device for around $9.99 is enticing.

However, over the last decade, another form of music has continued to grow in sales, a medium that has been around a lot longer than streaming, and it’s a medium that was once said to be dead.

For the 10th consecutive year in a row, vinyl record sales have grown considerably. According to the Recording Industry Association of America’s recently published shipment and revenue statistics for 2015, vinyl sales increased 32 percent to $416 million, marking the highest level of sales since 1988. Physical music is not dead, and music lovers continue to by it, even in the digital age.

The resurgence of vinyl is both exciting and confusing because getting into vinyl can be expensive. Standard vinyl LPs (Long Press) average around $25. That’s not cheap.

Likewise, the cheapest turntables and record players cost between $80 to $200, and speakers could cost another $100. But the expenses are not stopping music lovers. The record-buying demographic continues to grow. While longtime record collectors are obviously still heavily in the mix, an increasing number of millennials are buying records.

Maybe it’s the intoxicating sound of the needle first touching the grooves on the wax – letting off a subtle crackle and pop before the music plays. Maybe it’s the supreme sound vinyl delivers to music lovers and audiophiles. Whatever it is, more young people are appreciating the medium. Streaming services and digital music are convenient and great, but the best way to listen to music is vinyl.

This year is primed to be another big year for vinyl sales – especially with the unfortunate deaths of iconic musical artists, David Bowie and Prince. Bowie’s album “Blackstar,” which he released earlier this year, will easily be one of the top-selling vinyl albums of the year, while 11 of Prince’s original Warner Bros. albums will be repressed on vinyl throughout 2016.

The demand for vinyl is prevalent, and it’s becoming more apparent. Even popular retail store chains, such as Urban Outfitters and Barnes & Noble, now carry vinyl records and turntables.

Monthly online vinyl subscription services, such as Vinyl Me, Please and VNYL, will send records to your doorstep every month – paired with cocktails and artwork. These are just a few new businesses budding out of the vinyl revival, and there are more to come.

I don’t think vinyl sales will ever take over those of the digital market. The digital market, especially in our mobile-driven world, will likely dominate for the foreseeable future, and it’s understandable. However, year after year, vinyl sales continue to rise.

So could vinyl become as popular as it was in its heyday? Sure, it’s a possibility, and that would be amazing for both music lovers and the artists – artists make more profit off of the sale of vinyl compared to digital streams.

Digital will dominate for now, but vinyl is making a push. At the very least, the resurgence of vinyl has shown that the medium is here to stay. CDs, cassettes and digital album downloads may die (or not. I have no idea.), but vinyl is going to be around, side by side with digital, for some time to come.

Anthony Dicandia is a student at the University of Mississippi and can be reached at ajdicand@go.olemiss.edu.