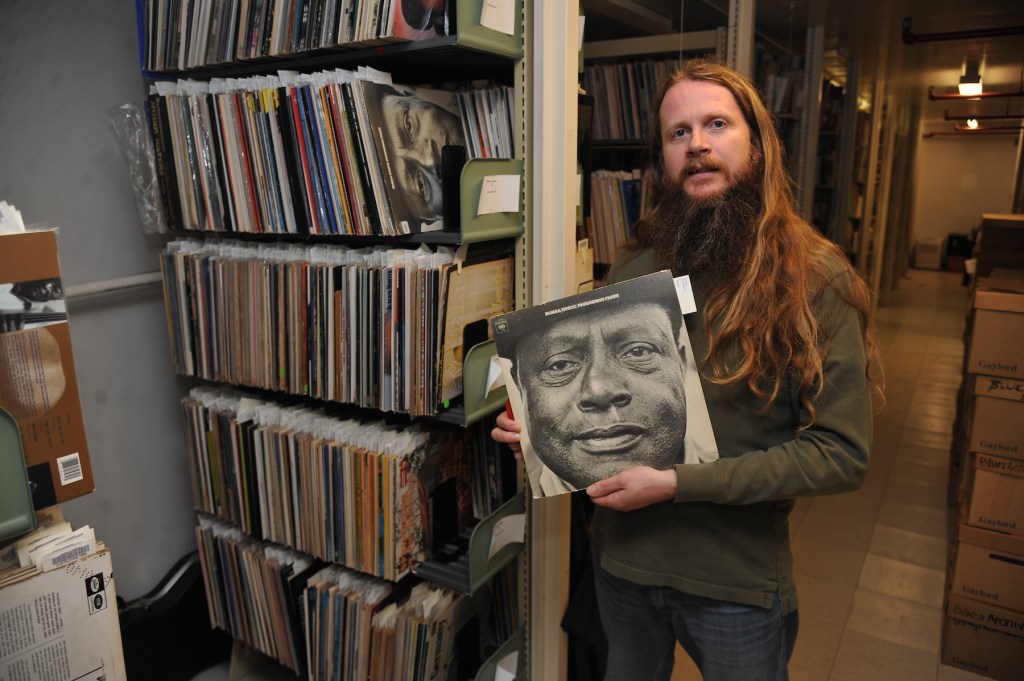 Blues Archive at the University of Mississippi, in Oxford, Miss. on Wednesday, May 18, 2016.

There are many different ways to answer the question of how Greg Johnson got to the place he is today, as he acts as both curator of the renowned Blues Archive at the University of Mississippi as well as a talented and diverse musician in his own right.

On one hand, Johnson can point to his entrance into musical performance during his sixth-grade year at West Lauderdale Attendance Center, just outside of Meridian, where he was introduced to the trombone in beginner band.

On the other hand, Johnson can go even further back and speak to the importance of growing up in a family that stressed the importance of music and culture from a very early age. Though his parents’ musical ability was limited to his father’s experience playing the trombone in high school and his mother’s role in the church choir, Johnson said that there was no shortage of music in his household growing up.

“Nobody was actively performing music,” he said. “They listened to a lot of music. Dad was always playing music on the turntables.”

Johnson said that his parents made it a point to take him to various events around their community, including performances by the Meridian Symphony Orchestra and the Meridian Community College Jazz Band, which introduced him to a variety of musical styles at a young age.

Regardless of the origin of his life in music, Johnson eventually set out on a path that took him from West Lauderdale to Meridian Community College, and then to the University of Southern Mississippi, where he would earn his bachelors degree in music history and his masters degree in library and information science.

After obtaining his masters degree, Johnson saw that the job at the Blues Archive was open, he applied and was given the position, and he has been there since 2002.

Although Johnson admitted that he would not have considered the blues to be his area of expertise when he first got the job, he still recognized his early exposure to this genre of music.

“Blues wasn’t my strongest area, honestly, right before I took the job,” he said. “I first got into blues when I was little. Back in Meridian, it was the ‘Highway 61’ radio show that’s still on today. Dad would always tune in on Saturday nights, and that’s when I first started hearing the blues.”

While he claims that blues was not his strongest suit prior to his current position, Johnson certainly covered some musical ground in his formative years.

A few years after picking up the trombone in beginner band, Johnson began playing the electric bass around his eighth-grade year, as he and some of his friends delved into rock and heavy metal music.

However, during his junior year of high school, Johnson became very interested in traditional Irish music, and he picked up traditional Irish instruments such as the pennywhistle and the bodhrán, or the Irish drum.

Although Johnson does have Scotch-Irish heritage, he credits the nationally syndicated radio show “The Thistle and Shamrock” with attracting him to this style of music, as he claimed to identify immediately more on a musical level than on a familial level.

After high school, Johnson attended Meridian Community College, where he began studying the stand-up bass and was introduced to one of his biggest inspirations and mentors, music director Carey Smith. Johnson said that Smith not only taught him a wealth of both music theory and practical musical knowledge that he has been able to carry with him the rest of his life, but also provided him with valuable opportunities to collaborate with other artists to grow as an artist himself.

“They brought in top-notch jazz performers, and I got to play with these guys when I was a junior and senior in high school and then for two years in community college,” Johnson said. “That was a really good experience.”

When Johnson arrived at Southern Miss after his time at Meridian Community College, he not only became involved with the school’s orchestra, but he also became interested in and began experimenting with early forms of music such as Medieval, Renaissance and Baroque. These new interests prompted Johnson to learn the instruments of these styles, including the recorder and the sackbut, which Johnson described simply as the “Renaissance trombone.”

Johnson credited both his musical training as well as his general curiosity for the wide range of instruments under his belt.

“I just get interested in different sounds and things, and I’m like, ‘I want to learn that,’ and I’ll go teach myself,” he said. “Obviously, I had sort of classical training on trombone and bass, and I studied music theory in college and took lessons on those instruments, but I basically taught myself electric bass, and I taught myself tinwhistle and harp and recorder and all of those things. But I think when you have a basic, general musical understanding, you kind of figure out other things, and then I started learning guitar, mandolin and tenor banjo.”

Given his diverse musical abilities, it’s understandable that Johnson is involved in a variety of local and regional projects. He plays with both the North Mississippi Symphony in Tupelo and the LOU Symphony here in town. He sits in with a jazz group comprised of members of the university’s music faculty, and plays with another jazz group called The Skid Rogues. He continues to play traditional Irish and Scottish music in a group called The Old Ways with his wife. Meanwhile, he also has a standing gig at the Crawdad Hole in Water Valley playing a mixture of styles including rock, blues and rockabilly.

When he’s not out and about playing music, however, Johnson can be found at his job at the Blues Archive at the J.D. Williams Library on campus, working on any number of projects.

“Currently, right now, it’s putting together an exhibit, so it’s a lot of coming up with what cases, what kind of thematic elements we’re going to have in each case, finding materials to support that, writing up all the text for the display, putting those together,” he said. “But that’s not something I’m doing every day, so it’s whenever we change out exhibits and put up new ones.”

Johnson also does a fair share of instructing at his post at the archive to various groups.

“Myself and the other curators at the archive, we do a lot of instruction,” he said. “It might be classes here, professors bringing their students up or outside groups, anywhere from like fourth grade students up to like Elderhostel groups coming through. I’ll give presentations on the blues, or music in general, or civil rights, or music of the civil rights movement, whatever it might be.”

Johnson said that one of his most frequent jobs is digitizing donated audio materials, transforming them from their current format on things like reel-to-reel tapes, audio cassette or 78 rpm records into more accessible digital audio files. Depending on usage agreements and copyright laws, some of these audio files are available for streaming from the Blues Archive from anywhere, while others are accessible only through computers at the J.D. Williams Library.

Johnson recalled a recent instance as one that particularly stood out to him. A researcher came by the Blues Archive who was related to a member of the Vicksburg-based band The Red Tops, which hit its prime around the 1950s. The band’s entire collection is in the Blues Archive, and Johnson was able to connect her with the donated materials.

“That’s when it gets really rewarding, when you get family members coming in, getting to connect with their fathers, grandfathers, grandmothers, things they didn’t know and getting to find that in the collection,” Johnson said.

Johnson recognizes that these experiences are a great example of why an entity like the Blues Archive is so important and why music can be such a powerful force.

“We’ve gotten several emails from folks saying like, ‘Oh my gosh, I see you have this in your collection. That was my grandmother, I would love to hear her voice again.’”