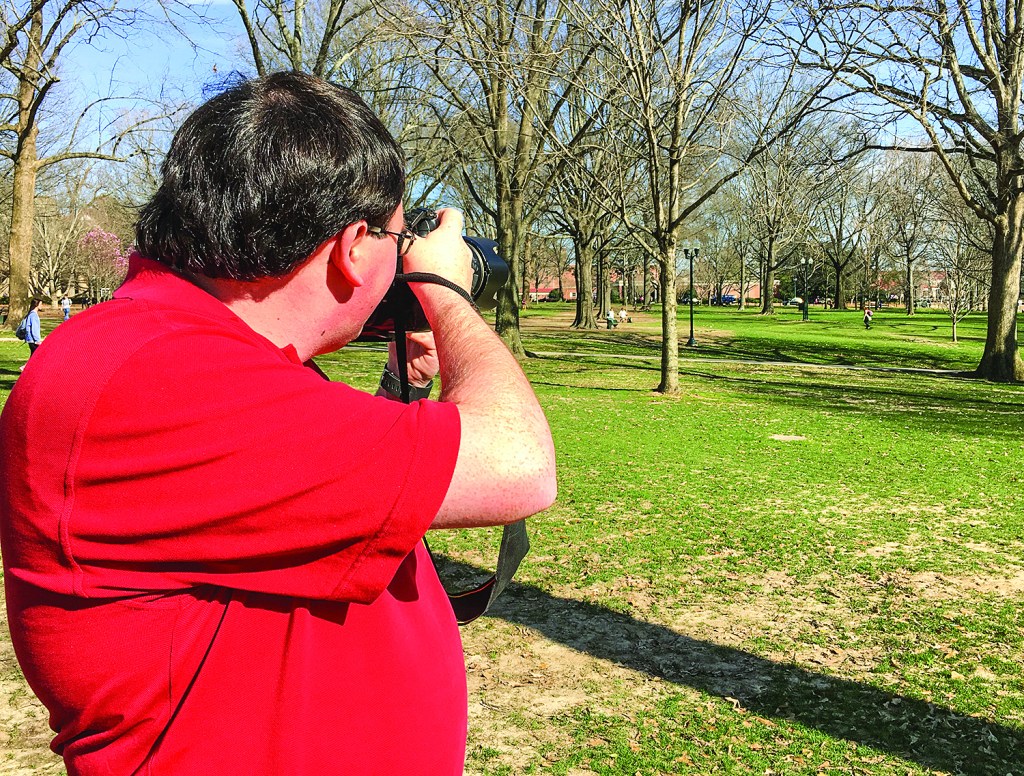 Thomas Graning shoots a photo on the University of Mississippi campus last semester.

Some say you must get a degree or you will go nowhere in life. That may be true for many people, but it’s not 100 percent true for part-time UM student Thomas Graning, who serves as a full-time photojournalist.

A typical day for the University of Mississippi communications office photographers includes scheduled shoots, clients and freelance gatherings. The three-man staff shoots pictures used by university departments, with the exception of athletics.

Thomas Graning is originally from Troy, Alabama. He now works at the University of Mississippi in the communications office. Graning graduated from Charles Henderson High School in Troy in 2012, but his career as a photojournalist began long before then.

“My mom got tired of me being restless and put a camera in my hands,” Graning said. “She told me to go shoot my brother’s baseball games, and that’s where it started. From there, I started working at The (Troy) Messenger. All through high school, I was pretty much a staff photographer and was able to get my name out there.”

Graning shot more as time went on. Eventually, he was given the opportunity to become a freelance shooter for The Associated Press. The AP has staff members all across the country, but only in relatively big cities.

During the time he shot minor assignments for The Associated Press, Graning was a freelance photographer for The Daily Mississippian before becoming a member of the editorial staff. Graning left in January of 2015 to pursue other opportunities.

Since leaving The Daily Mississippian, Graning has moved on to the highest photography position on campus — communications photographer. The position became available in the summer of 2015, and Graning began the process of applying and interviewing.

“We narrowed it down to a few candidates, and both of the others had a decade or more experience,” Photography Director Robert Jordan said. “Thomas was the right fit for this job.”

For Jordan, the ceiling with Graning is endless, and that’s why he was selected. “He had the instincts, the right skill-set and the attitude,” Jordan said. “I can train anybody willing to learn.”

Prior to joining the UM communications staff as a full-time member, Graning joined Bruce Newman at The Oxford EAGLE for a brief period to help out.

“I was doing mostly copy editing, and taking some photos here and there,” he said. “I did that in the spring of 2015 until joining communications.”

Along with Kevin Bain and Jordan, Graning shoots Ole Miss students, faculty, staff and guests during the time they spend on the Ole Miss campus.

“Robert (Jordan) told me this position was becoming available, and that I may be interested,” Graning said. “I still had to apply and interview like everyone else. I applied, nervous as hell, and had to go through the rounds and the interview process.”

Jordan said having people (in the field) without a degree isn’t unprecedented. It’s all about your portfolio.

“I guess I stuck out somehow, because I’m here now,” Graning said.

Though, it is a real, “adult job,” Graning is free to chase other ventures on the side. You’ll often see him shooting fires or big car accidents, and you will almost always find him at the airport overlook in north Oxford during bad weather.

You’ll see Jordan, Bain and Graning on campus every day, but you’ll often catch one walking through the historic Grove shooting pictures of students walking to class. It’s not an easy task capturing the happenings of 20,000 students at a university with only three cameras.

Jordan showed off one of the most favored features on the university website, OleMiss.edu — the week in photos section. “The goal is we want to show people what it’s like to be here,” said Jordan.

The section highlights the best photos from the week in the life of UM straight from the lens of the communications photographers. They shoot everything from birds in the Grove to historic wins for the Ole Miss Rebels. If there’s an event happening on the Oxford campus, someone from the communications office is there.

UM student Victoria Lanza said the pictures are a good representation of the current events that are happening on campus and the photos show prospective students what UM is like. “I feel like people are more drawn to a picture if it is of a person, as opposed to just pictures of the campus,” she said.

That section has received millions of hits online since it’s beginning just a few years ago, and Jordan is happy about that statistic, especially because of the way photography is going in 2016.

“Photography has always been a tough business,” Jordan said in closing. “Anyone who does journalism or photojournalism is not in it for money. Everyone has a camera in their pocket now, so it makes it much harder.”