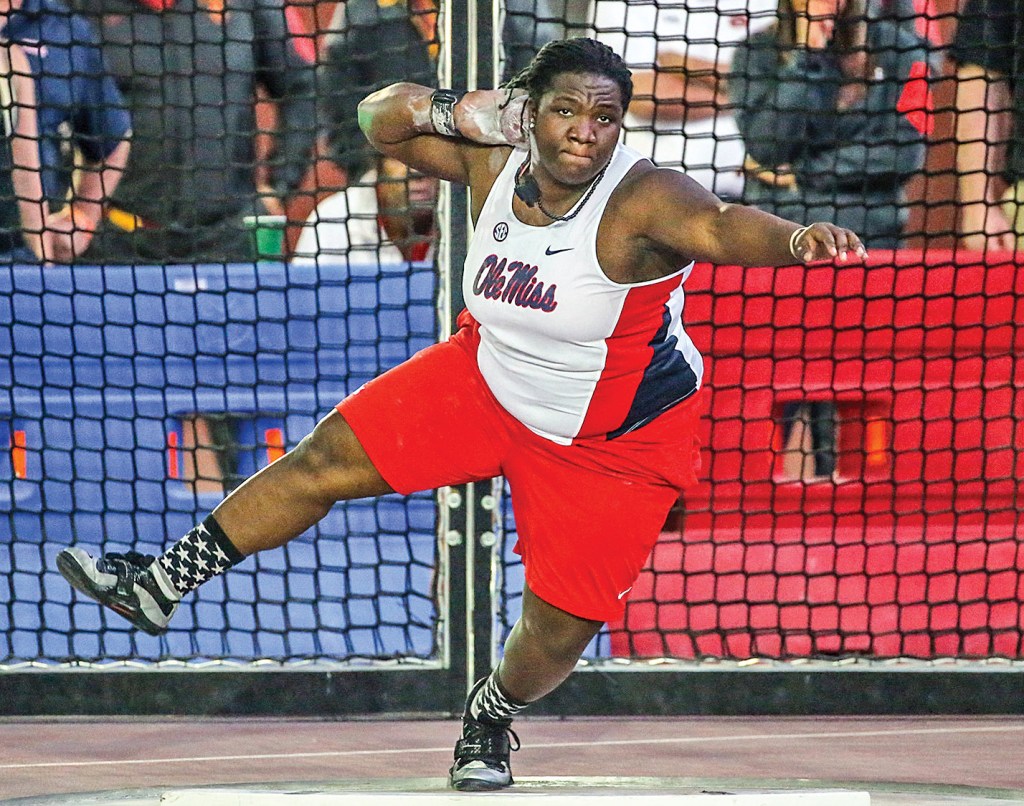 Reigning shot put champion Raven Saunders was one of nine Ole Miss athletes to qualify for the NCAA Outdoor Championships on the final day of the East Preliminary on Saturday. (Josh McCoy/Ole Miss Athletics)

JACKSONVILLE, Fla. — After securing four berths into the NCAA Outdoor Championships over the first two days of the NCAA East Preliminary at the University of North Florida’s Hodges Stadium, nine more Ole Miss athletes punched their ticket to Eugene on Saturday’s final day of the prelims.

The total of 13 Ole Miss athletes who qualified for the national outdoor meet is the fourth-highest total in school history, and the 10 qualifying entries is tied for fourth in school history. Not a bad start for first-year head coach Connie Price-Smith.

“We had a good three days, and I’m excited for the athletes who qualified to the final round,” Price-Smith said. “We had a lot of good performances that just missed out as well. It has been a great season and I am proud of all of the athletes. Hats off to the 13 that made it to Eugene and their coaches.”

In order to advance through Jacksonville to the June 8-11 NCAA Outdoor Championships in Eugene, Oregon, athletes or relays had to place top 12 out of 48 individuals (or 24 relays) in their events.

The Ole Miss men had seven athletes qualify for nationals while the women had six athletes.

Junior Robert Domanic earned his second straight berth to Eugene by posting the third-fastest time of the 1500-meter quarterfinals, 3:43.87. Sophomore Craig Engels, the 2016 SEC champion in this event, ran 3:44.19 to place sixth among the quarterfinalists. He also will make his second straight appearance in Eugene, although he qualified in the 800 meters last year.

Senior Ryan Walling qualified in the 5000 meters by running the sixth-fastest time of the day in 14:10.31. He earns his first berth in the NCAA Outdoor Championships, but he was a first team All-American in the 5000 at this year’s indoor national meet. He’s the first Rebel to qualify in the outdoor 5000 since Pablo Sierra in 1993.

After winning the SEC high jump title, senior Branden Greene carried over the momentum on his way to a qualifying spot in the NCAA high jump. He tied for 11th with a clearance at 2.13m/6-11.75 and will be making his second straight appearance in Eugene.

For the Ole Miss women, sophomore Raven Saunders punched her ticket in the first event of the day. She carried a first-attempt shot put of 17.12m/56-2 to third place, while fouling on her other two attempts. She will be making her second straight appearance in Eugene after she claimed the NCAA outdoor shot put title there last year as a freshman at Southern Illinois.

For the second straight year, the Rebels’ 4×100-meter relay squad will go to Eugene. The quartet of Nicole Henderson, Shannon Ray, Breanna Tate and Khadijah Suleman ran the sixth-fastest time of the day at 44.22. Three of the four (Henderson, Ray, Suleman) were on last year’s unit that was the first in school history to make the national final in the 4×100 and earned them first team All-America accolades.