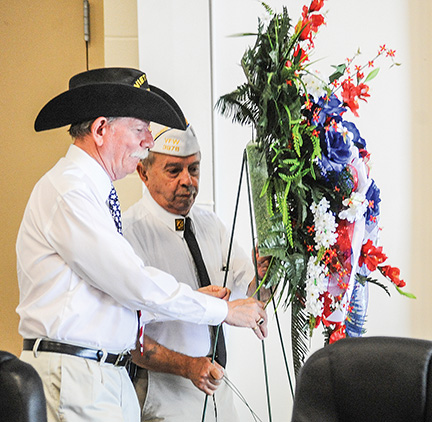 Bill Arnold, left, and Johnny Swain place a wreath during a Memorial Day commemoration at the Oxford Conference Center in Oxford, Miss. on Monday, May 30, 2016.

The late Marvie Harrison fought in, and survived, World War II, coming back home to the states with several medals that were pinned onto his uniform jacket. He lived to be 94 years old until his death in February.

His daughter, Geneva Allen, didn’t want those same medals and jacket to sit in a box or in a closet. So she gave them to the people she felt would not only appreciate them, but also honor them — fellow veterans.

On Monday, during the Community Memorial Day Ceremony at the National Guard armory, Jerry Bratton of the Disabled American Veterans, announced Harrison’s jacket and medals will be displayed at the Veterans Building in a cedar box.

“I felt it was the perfect way to show them and have them honored,” Allen said Monday. Memorial Day is when the country stops for a few moments to remember all veterans who have passed away, and especially those who gave their lives while serving their country.

Brig. Gen. John Rhodes, guest speaker at the ceremony, recognized those soldiers and reminded the crowd attending the ceremony that there is still a war going on.

“On Sept. 11, America was attacked and many innocent citizens were killed,” he said. “Our nation went to war and that war continues today. As of today, there are over 700 Mississippi National Guard serving, or scheduled to serve overseas. Today, there is a marine, a soldier, a sailor and coast guard, serving our nation in a hostile environment, jeopardizing everything for our security and ready to sacrifice their lives for someone else.”

Lafayette County Board of Supervisors President Jeff Busby kicked off the ceremony, welcoming everyone to the event and thanked the veterans present for their service and remembered those who were not there to be honored.

Veteran Will St. Amand read the 106 names of local veterans or veterans with ties to Oxford, who died in the last 12 months.

“This a time to remember those who signed that blank check,” he said. “Those who said, ‘I will do what I am told, go where I am told to go, even if that means giving up my life.’ They are no longer with us. This is a chance to say ‘thank you for your service.’”

Also during Monday’s ceremony, St. Amand and veteran H.C. Franklin were given certificates of appreciation for their dedication to the local veteran organizations.