MOVING ON: Oxford Regional filled out as Rebels miss on national seed 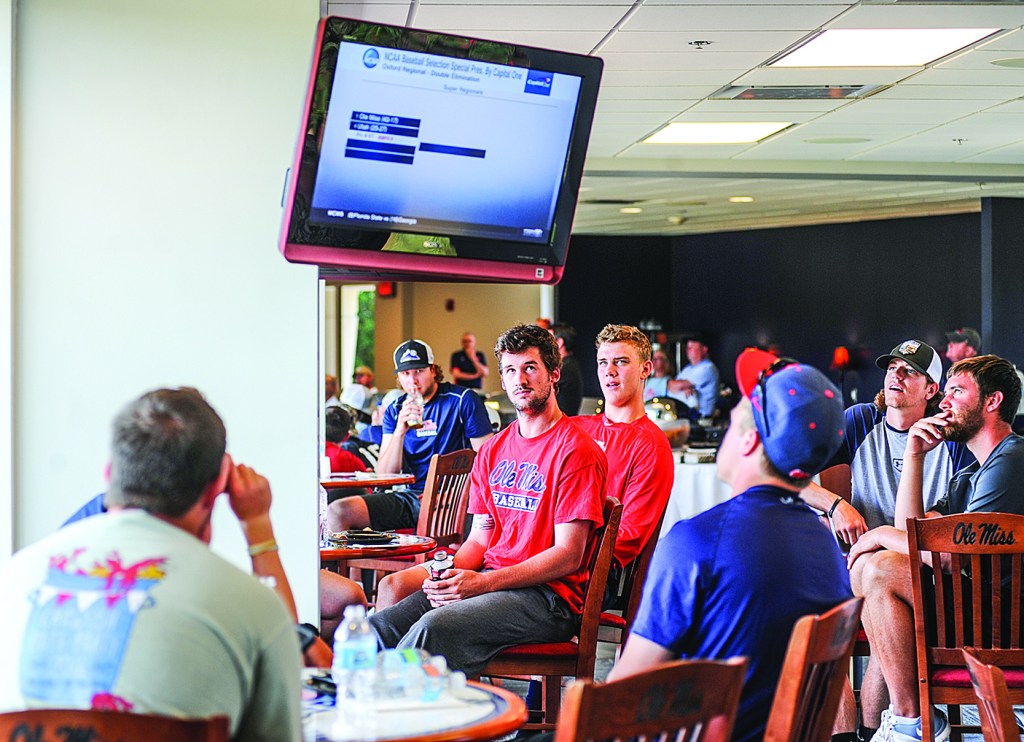 Members of the Ole Miss baseball team watch the NCAA Baseball Tournament selection show inside the Diamond Club of Oxford-University Stadium on Monday. The Rebels will host their second regional in three years as Tulane, Boston College and Utah were the three other teams selected to play in Oxford this weekend.

Ole Miss missed out on a national seed and found out it will be paired with No. 3 national seed Miami for a potential super regional matchup next week.

Oxford-University Stadium will host Utah, Boston College and Tulane this weekend in the double-elimination tournament. Ole Miss will face PAC-12 champ and No. 4 seed Utah (25-27) in the first round on Friday at 7 p.m. All regional games will be aired on ESPN3. No. 2-seeded Tulane will face No. 3 seed Boston College to kick off the regional at 3 p.m.

“I think it’s really close,” Ole Miss coach Mike Bianco said of the national seed snub. “I think there’s a lot of different factors, and I think some we were good in as far as RPIs and whatnot. Some other factors probably leaned in some other teams’ favor. I thought the committee did a good job.”

It was a thin line between Ole Miss (43-17) and LSU for the final slot in the top eight national seeds. The Rebels were No. 5 in the final RPI rankings with LSU sitting at No. 7, but the selection committee chose the Tigers, who won 13 of their last 14 regular-season games and made a run to the semifinals of the Southeastern Conference tournament in Hoover, Alabama last week.

“I thought we deserved (a national seed),” shortstop Errol Robinson said after the tournament field was announced Monday morning. “I thought we did enough to increase the wins in our resume this year. It’s disappointing, but it’s not really in our hands. I think we did everything in our power to become a national seed and things didn’t go our way.”

The four SEC national seeds is a conference record, a day after it set a record with seven regional hosts.

Boston College (31-20) went 13-15 in the ACC during the regular season and squeaked into the ACC tournament last week, which helped the Eagles make it to the field of 64. Tulane (39-19), the Atlantic Athletic Conference regular-season champion, will prove to be a tough out after taking two wins over Southern Mississippi (a No. 2 seed in the Tallahasee Regional) as well as two wins over LSU.

“To host your regional and be a No. 1 seed and play the PAC-12 champion out of the gate, regardless of RPI and record, they’re really good,” Bianco said. “You don’t win that league by chance. Then of course Tulane won their conference. So you have two conference champions coming in here and Boston College from the ACC. So, like a lot of teams feel who are hosting, the regional is going to be really strong.”