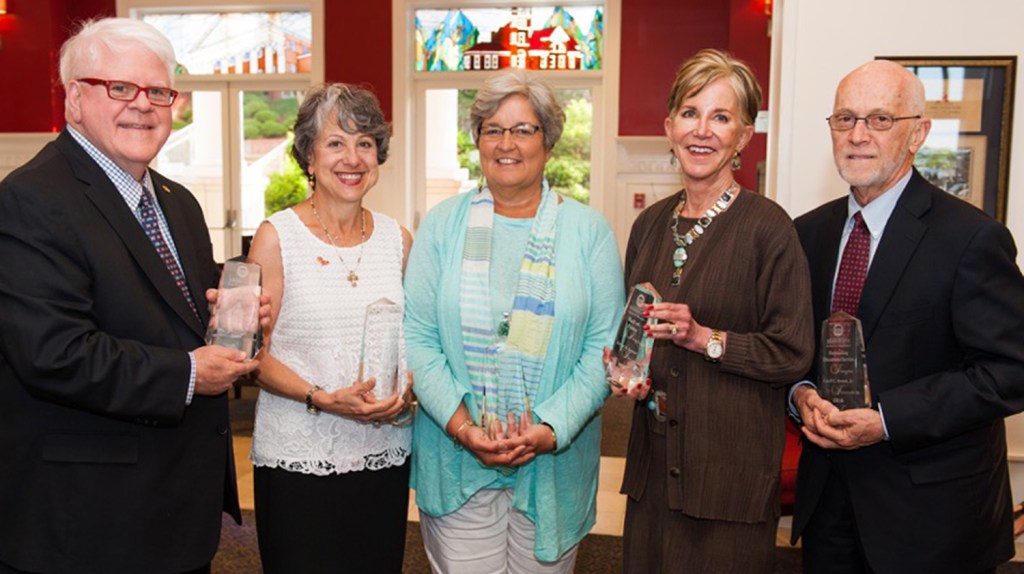 The University of Mississippi has inducted its second class of alumni into its School of Education Hall of Fame. Collectively, the group has more than 178 years of experience, commitment and public service to education.

“Our alumni board of directors selected our 2016 alumni award recipients for their distinguished careers as educational leaders and practitioners,” said David Rock, UM education dean. “Each of these five alumni are models for our current university students and graduates to emulate.

“We believe there is no more important or greater area of service in our state and nation than in the practice and advocacy of education.”

The ceremony was May 13 at the Inn at Ole Miss. Honorees were selected after being nominated by their peers and colleagues earlier this year.

Adcock, who graduated from UM in 1977 with a bachelor’s degree in elementary education, has taught in both public and private schools for more than 31 years and is still teaching. She serves as the lower elementary school librarian and media specialist at Jackson Academy.

“I’m so humbled by this honor because I know so many teachers who should be in this spot; I really do,” Adcock said. “I am a teacher because I genuinely love what I do. I do everything that I do for my students. They are my heart. They really are.”

Barnett, who earned a master’s degree in business education from UM in 1967 and a Ph.D. in higher education in 1972, is president of William Woods University in Fulton, Missouri, a position the alumna has held for more than 26 years. Before her presidency, Barnett was a vice president and a department chair at William Woods.

“I cannot imagine anything more rewarding than your peers, your colleagues and your academic institution saying that you’ve done exactly what you were supposed to do in your life,” Barnett said. “We just had our own alumni weekend at William Woods where we inducted some alumni into the hall of fame, and I knew exactly what that meant to them because of this honor.”

Depro, who earned a master’s degree in secondary education from UM in 1970, has taught history and social studies for more than 50 consecutive years and has taught more than 10,000 students in his career. From 1966 to 2000, he served as a social studies teacher and departmental chair at Sikeston Senior High School.

Stewart, who is a three-time graduate of UM, earned a bachelor’s degree from Ole Miss in elementary education in 1978, as well as a master’s degree and doctorate in curriculum and instruction in 1981 and 1995, respectively. Besides serving 20 years as an elementary teacher in the Lafayette County School District, Stewart also served as an adjunct professor at UM and as the founding director of the university’s World Class Teaching Program and director of the UM Writing Project.

“I knew in first grade that I wanted to be a teacher,” said Stewart. “I never changed my mind and I never wavered. My advice for future teachers is to never quit learning and to always be open to learning a better or different way to do and improve the way you teach.”

Brown, who earned a bachelor’s degree in English and mathematics from UM in 1966, has been a public and private sector leader in Mississippi for more than 25 years. A Certified Public Accountant and the owner of his own accounting firm, Brown’s public service includes a stint at Mississippi State University as a fiscal officer and a 16-year tenure as a member of the Mississippi House of Representatives, where he served as the chairman of the House Education Committee for seven years.

“I’m very thankful for this award,” Brown said. “My hope is that somehow children will continue to benefit from the work that I have been able to contribute in service to education. They are the most important thing.”