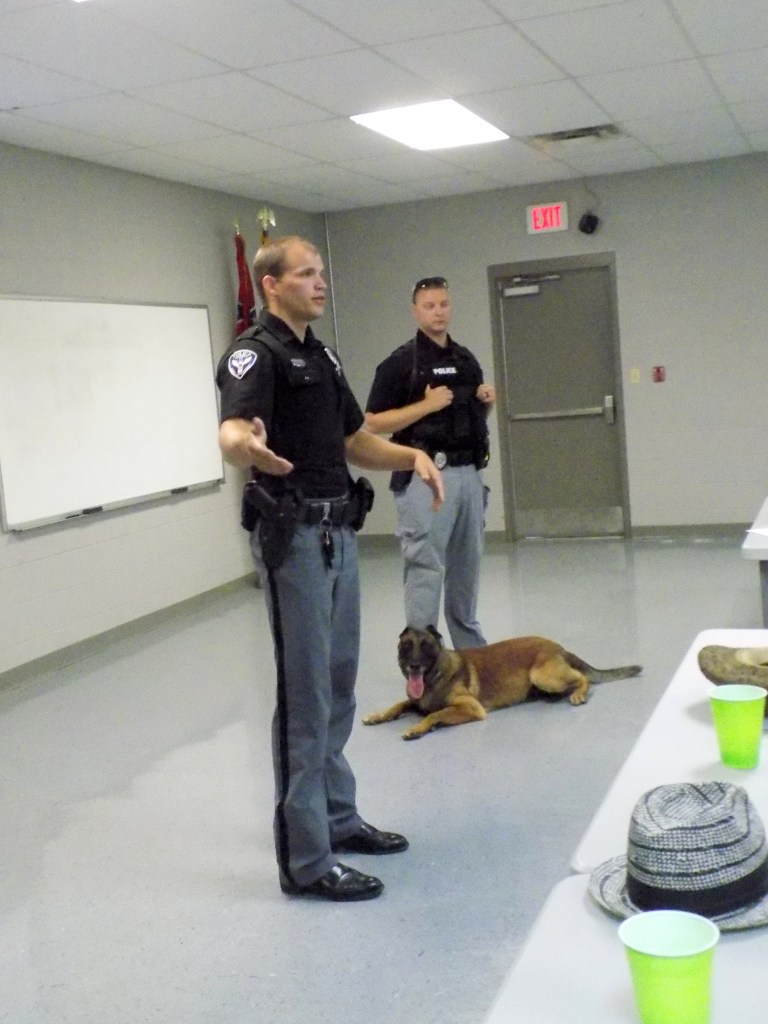 Participants in the fourth Citizens Academy offered by the Oxford Police Department have spent the last few weeks learning about a police officer’s job — traffic stops, drug arrests and even spent some time at the shooting range learning how to shoot a firearm.

However, on Tuesday, they learned all about the city’s four-legged officers.

Officer David Misenhelter taught the class about the city’s Mounted Patrol that started several years ago to help with crowd control on the Square during busy weekends.

Misenhelter showed the group some videos of how quickly and easily the horses can control a crowd.

“The general consensus is one mounted officer can do the work of 10 officers on foot,” Misenhelter said. “When we’re mounted, we can see what’s going on for two blocks. The horses’ presence changes the demeanor of those on the street and gets them moving.”

After learning about the horses and how they help the department, those attending the class got up close and personal with police horses outside of the OPD training building on Molly Barr Road.

“Those are some of the biggest horses I’ve ever seen,” said Alex Balducci, who attended the class to learn more about OPD and ways he can help them now that he is retired. “And I’ve seen a lot of horses in my day.”

The Citizens Academy was started about five years ago to give citizens a better idea of what officers do on a daily basis.

“We wanted to show the public the ins and outs of what we do and why we do what we do,” said Capt. Alan Ivy. “The No. 1 reason we do anything is to keep people safe — whether it’s the people we’re dealing with or ourselves.”

Each academy is about six weeks long and classes are held once or twice a week. The current class started on May 3 and will end on June 21 with a graduation party.

Cpl. Matt Samuels and K9 Officer Alex Moffett introduced the class to Mattis, a 3-year-old Belgian Malinois, that is trained to search for drugs. There are currently three K9s working for OPD. They wear bulletproof vests that were donated to the department.

The dogs are trained to alert officers to the existence of drugs during a search, find missing people, take down a running suspect and in some cases, search for bombs. Samuel’s K9, Bak, is an 8-year-old German shepherd that is trained to find bombs and explosives.

During the class, marijuana was hidden inside the training building. Mattis took less then 30 seconds to find the drugs inside of a bag. Once he found it, he sat and waiting for his reward — a bright yellow tennis ball.

Dianne McGlown said she came to the class to learn more about the police and has really enjoyed the class thus far.

“I’ve learned how important their work is and how dangerous it is,” she said. “They have such care about their community.”

McGlown said she found the class about traffic stops the most interesting.

“I never knew how dangerous a traffic stop could be,” she said. “You don’t know what the person is thinking or doing, and can come out of the car shooting.”

No date has been set for the next Citizens Academy, however, applications are being accepted now. Once enough people have signed up, the next academy will be scheduled. Stop by the OPD on Molly Barr Road to pick up an application or call 662-232-2400 for more information.