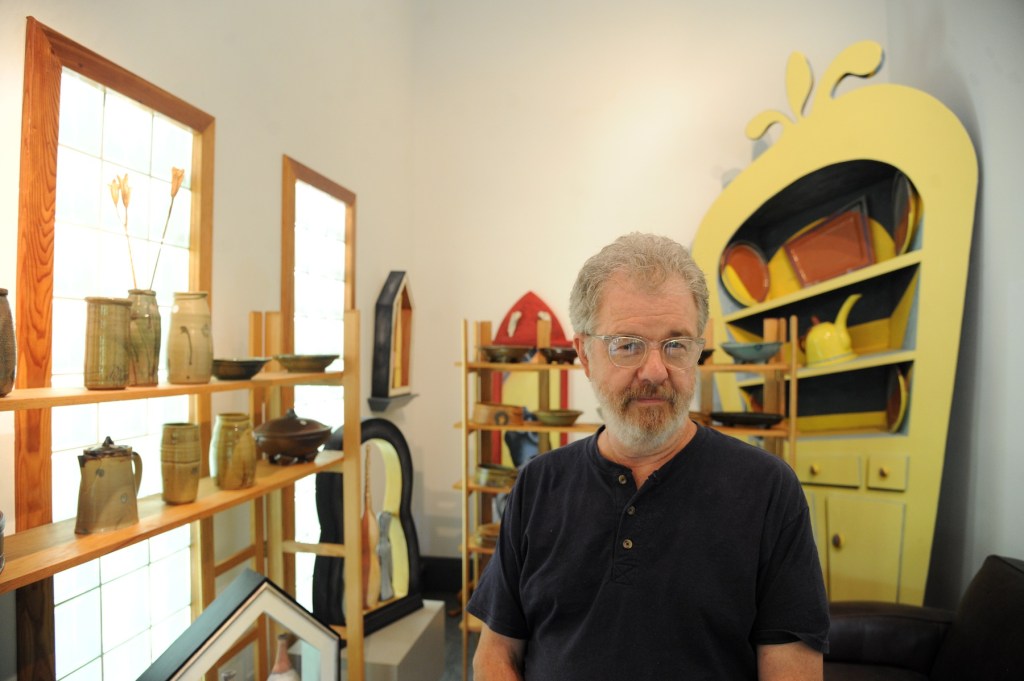 Oxford has long been home to many a celebrated artist, and now, another local artist has been pegged to receive an honor placing him amongst Mississippi’s elite.

Ron Dale of Oxford has been tabbed as one of this year’s recipients of the Noel Polk Lifetime Achievement Award from the Mississippi Institute of Arts and Letters, hand-selected by a panel of out-of-state judges who represent leading figures in their respective fields. Dale will receive his award at a June 11 ceremony in Jackson at the Mississippi Museum of Art.

Although Dale is set to be recognized for his noteworthy life in the arts, he said that, outside of the usual childhood dabbling in painting and drawing, he did not pursue art until he was around the age of 21.

Dale pointed to some of his childhood experiences growing up in Asheville, North Carolina, particularly singling out the renowned Southern Highland Handicraft Guild, with exposing him to some of the art forms that would inspire his creations later in life.

“They had an annual exhibition at what was called City Auditorium then,” he said. “We went as schoolkids as classes, and that’s the first time I remember seeing people work with clay.”

It wasn’t until later in life that Dale picked up the art form, however. After serving in the Navy during the Vietnam War, he found work at a mental hospital in Atlanta with his brother, who had experimented a little bit with clay himself. Part of Dale’s job was to order materials for some of the hospital’s therapeutic activities, such as a ceramics lab and a wood shop. Dale said that these creative outlets went relatively unused for the most part, and so he decided to take advantage of the opportunities in front of him.

“I had plenty of time, so I just sort of taught myself how to do it,” he said.

Developing as an artist

After working in Atlanta, Dale attended and earned his Bachelor of Fine Arts degree from the innovative Goddard College in Vermont, known for its progressive educational techniques and its lack of rigid, formal curriculum, something that Dale said could be either a positive or a negative aspect, depending on the individual.

“It’s not the greatest place for everyone because there was a lot of freedom, and some people couldn’t handle that much,” he said.

However, Dale said that he thinks the freedom offered by Goddard was an important tool in his development as an artist because, despite the presence and input of faculty members, students like Dale could essentially construct their own curriculum and tailor their education to their own personal desires and needs.

After his time at Goddard, Dale went on to earn his Master of Fine Arts degree from Louisiana State University and eventually landed in Oxford, where, in addition to his work as an artist, he was an instructor at the University of Mississippi from 1980 to 2005.

Early in his career, Dale found influence and inspiration from the works of other potters and spent a lot of time looking back at his historical predecessors, but as he progressed, he began to widen his scope to include other art forms, taking influence from other visual media in constructing his own artwork, particularly his sculptures that play with multiple dimensions and perspectives.

“I started looked more at painting than anything else, and that’s sort of how these 2-D, 3-D things have come about,” he said. “They represent a mirror and a reflection. The idea of being in a space, an imaginary space, became really important to me.”

His work has evolved

Dale said that over the course of his career, he has carved out a distinct niche for himself through his sculpting and pottery.

“My work is two pretty distinct directions,” he said. “The sculpture pieces are pretty unique because I don’t know if anybody else is really working with the same materials in the same way that I am, using furniture and pottery as images to express, that’s what makes them different. Pottery is more evolutionary than revolutionary, so things change just a little bit along. I’ve been doing this for 45 years, so the work has definitely changed over the years. Even without trying to, you develop sort of a style, sort of a fingerprint, like your handwriting. You can’t fake it, really.”

In addition to his role as instructor at the University of Mississippi, Dale’s career in education has also featured stints at the renowned Penland School of Crafts in North Carolina, as well as overseas in Cortona, Italy, and at Blackhills Pottery in Elgin, Scotland.

Dale’s work has been featured in 26 solo exhibitions and nearly 100 group exhibitions, is included in several private and public collections, and has received numerous awards, including the 1992 Mississippi Institute of Arts and Letters Award for the Visual Arts.

Dale said that receiving the Lifetime Achievement Award is not only an honor, but also a bonus on top of getting to live out his dream on a daily basis.

“I feel really lucky that what I do is what I love to do and have a compulsion to do,” he said. “Then, to get recognition for it is sort of like icing on the cake. It means a great deal to me.”

Though he has been retired from education since 2005, Dale continues to produce his distinctive brand of artwork at his home studio, Irondale Studio, designed by Dale himself, and plans to keep himself plenty busy for years to come.

“It’s sort of shocking for me to call it a ‘lifetime achievement,’ because I think I’ve got a long way to go yet.”