VFW selects Teacher of the Year 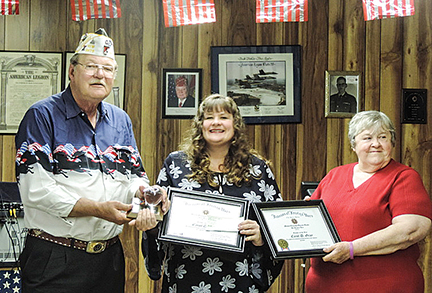 The Veterans of Foreign Wars Dan Jackson Post 3978 held an awards ceremony recently for teachers in Oxford and Lafayette County at the Veterans Building in Oxford on Veterans Drive.

The VFW and Auxiliary of Post 3978 have continually awarded teachers by identifying and recognizing those who have instilled in their students American history, traditions, Americanism, civic responsibilities, flag etiquette and patriotism.

Carol D. Gray, a native Lafayette County, has taught in Lafayette Elementary School since October 1997 in the kindergarten through fifth grade. Gray teaches the children to recite the Pledge of Allegiance and the importance of the United States flag.

Around Christmas, her children present a program titled, “Teaching Peace.”

Gray not only won Elementary Teacher of the Year for local VFW Post 3978, but also went on to win for the 10th District, which covers all of northwest Mississippi.

“Congratulations go out to Carol for being an instrumental part of our elementary students’ lives,” said Post Commander Gail Wilson.

Auxiliary president Dyanne McCord added, “Having known Carol so long, her winning this award makes me extremely proud of her accomplishment.”