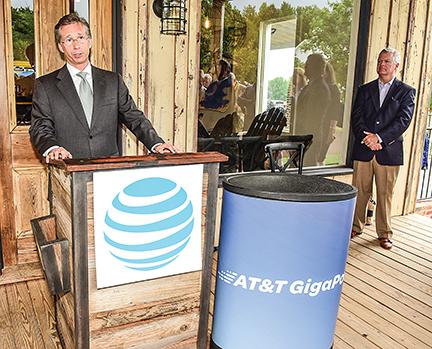 Folks living in Taylor may soon be browsing the web at lightning speed, thanks to AT&T’s initiative to bring high-speed internet to rural areas.

On Friday, AT&T representatives, along with city and county officials and U.S. Sen. Roger Wicker gathered at the soon-to-be opened Grit restaurant in Plein Air where AT&T Mississippi President Mayo Flynt announced that Taylor is one of many locations that will be able to access ultra-fast internet speeds up to 1 gigabit per second over AT&T’s GigaPower fiber network. Additional fiber to the home will be upgraded to the 1 gigabit later this year, Flynt said.

“We deployed fiber technology to 15,000-plus locations, businesses and residences in 19 counties,” Flynt said. “These were areas previously un-served, or under-served, having no or almost no internet services.”

The 1 gigabit, or 1 Gbps, will allow Taylor residents to watch movies and music videos online, connect faster to the cloud, video conferencing and download 25 songs in 1 second, a TV show in 3 seconds and a movie in less than 36 seconds, according to AT&T.

Wicker said he remembers times before the internet became a household word.

“When I was in high school, you’d get the encyclopedia out and hope you got the right one,” he said. “I can remember my kids … with dial-up internet just screaming at the computer. Remember how frustrating that was? There are those who are still screaming at their computers in our rural areas. This will really change that for thousands of Mississippians and the face of connectivity in our state.”

In addition to Taylor, AT&T has deployed fiber to homes and small businesses in several surrounding counties, including Marshall, Panola and Pontotoc. Those locations will initially be able to connect to the internet with speeds up to 75 megabits per second.

“We look to expend the 1 gigabit to those areas in the months to come,” Flynt said.

Taylor residents will be able to choose between DIRECTV or U-Verse services for internet and television.

In late 2011, the Federal Communications Commission modernized its Universal Service program and created the Connect America Fund to help high-speed internet provided reach customers in high-cost, predominately rural areas, mostly due to low-density and large distances between customers. The fiber expansion project is partly funded by the Connect America Fund.

AT&T claims they’ve invested more than $875 million in its Mississippi wireless and wired networks between 2013 and 2015. They added more than 10,500 customers in Mississippi to its network since 2012.

Flynt did not say what areas, if any, in Lafayette County they could be expanding into down the road.

“We are announcing this today about Taylor, we’ll have some other things to talk about in the near future,” Flynt said.

Campbell McCool, Plein Air developer, said the high-speed internet will not only help residents but businesses as well.

“We’re excited Taylor was chosen to start this,” McCool said. “From a development standpoint, it’s an incredible marketing vehicle for us. A study suggests that fiber to a home increases its value by $5,000. That’s not only good for residents, but to help attract additional businesses here.”