OVER AND OUT: Rogers’ late HR knocks Ole Miss out of Oxford Regional 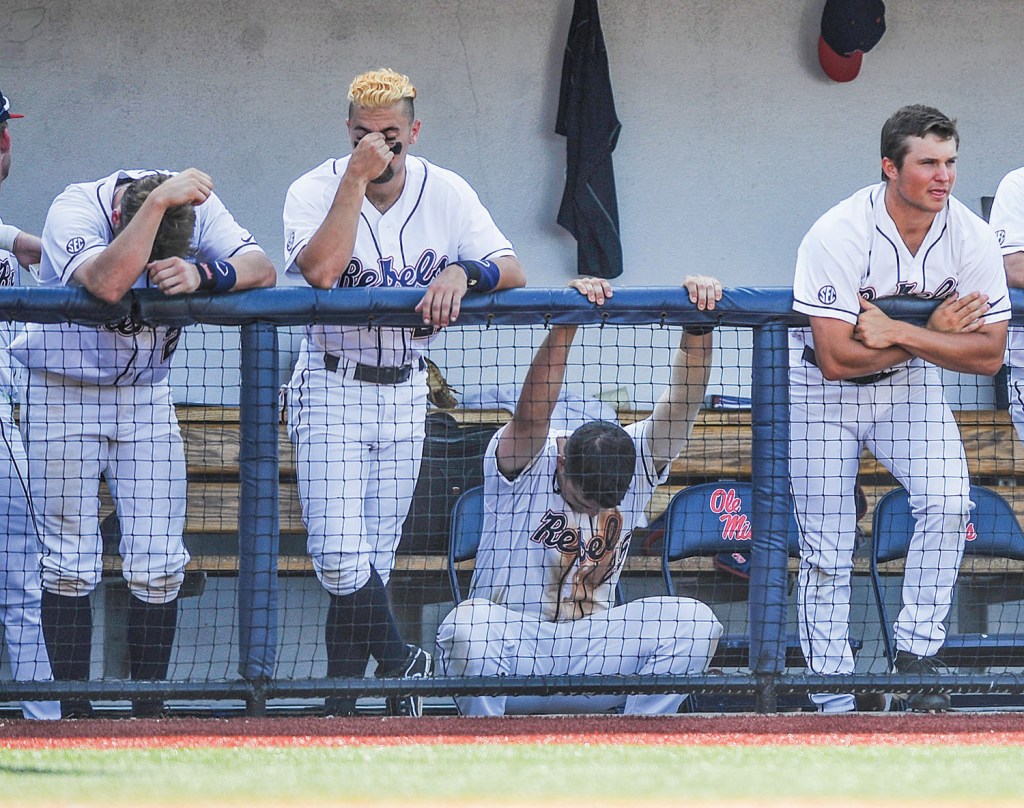 Ole Miss players react to the season-ending loss to Tulane in the Oxford Regional college baseball tournament game at Oxford-University Stadium in Oxford on Saturday. Tulane won 6-5, sending the Rebels out with their second straight 0-2 showing in regional play. (Bruce Newman)

The task was going to be tough. Ole Miss was staring at a must four-game winning streak if it wanted to keep its season alive.

The Rebels were unable to win one game.

In a back-and-forth elimination game, Tulane catcher Jake Rogers crushed a two-run home run over the Ole Miss bullpen in left field, helping the Green Wave defeat the Rebels 6-5 and eliminating the No. 1 seed out of the Oxford Regional on Saturday afternoon at Oxford-University Stadium. Tulane advanced to its second straight elimination game and will face Utah today at 1 p.m.

It is the second straight season Ole Miss (43-19), which fell to Utah 6-5 in its regional opener Friday, has gone 0-2 in a regional dating back to last year in Los Angeles.

“It’s hard to talk after that,” Ole Miss coach Mike Bianco said. “I told the kids that’s why it’s the greatest game on earth. A game that you have the thrill of victory, and then it can just rip your heart out.”

Tulane (40-20) rallied back three different times in a game where power offense was key. Four of the game’s first five runs came off home runs. After an RBI double by Ole Miss center fielder J.B. Woodman to score Tate Blackman in the first inning, the long ball took over.

Green Wave first baseman Hunter Williams’ first two at-bats saw him go yard each time. Both home runs were to dead center and hit off the batter’s eye. The first came in the top of the second to knot the game 1-1. He then followed it up with his second one in the fourth to make it a 2-1 Tulane lead.

“I just go up and try not to do too much. Just get a good pitch to hit,” Williams said. “Found the barrel on both swings and the ball kind of jumped out a little bit.” 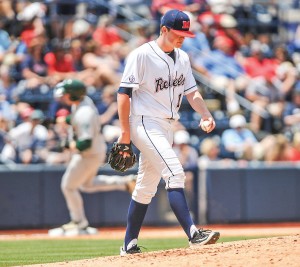 The offense kept going with Ole Miss’ Colby Bortles hitting a solo shot in the home half of the fifth inning to tie it up 2-2. Kyle Watson followed later in the inning with his second home run in as many days to make it 3-2. It could have been 4-2, but a baserunning blunder by Holt Perdzock one at-bat previous eliminated the extra run.

The seesaw continued with Tulane adding two runs in the seventh before the Rebels answered with two runs of their own in the bottom of the frame to make it 5-4.

Tulane brought in starter-turned-closer Corey Merrill after starter Alex Massey worked six innings, giving up four runs, all earned, on six hits. Merrill got the bases loaded, and on a 2-2 count with two outs, shortstop Errol Robinson hit a two-run single for the Rebels’ third lead of the day.

Merrill stayed in and was able to close things out, working the final three innings for his fourth win of the season after Rodgers home run.

“That was huge,” Merrill said of Rodgers’ home run. “I was foaming at the mouth as soon as Rodgers hit that ball. (Ole Miss) got me in the mouth pretty hard. The thing was just getting back up and fighting for them.”

David Parkinson got the start for Ole Miss and went 5 2/3 innings, giving up two runs, both earned, on five hits while striking out three and walking two. With two runners on and two outs in the sixth, Parkinson was replaced by Connor Green with the Rebels holding a 3-2 lead at the time.

“I thought at that point (Parkinson) was getting close to the end,” Bianco said. “If it wasn’t first and second, we probably wouldn’t have made the move. I liked the matchup with Green against (third baseman Hunter) Hope.”