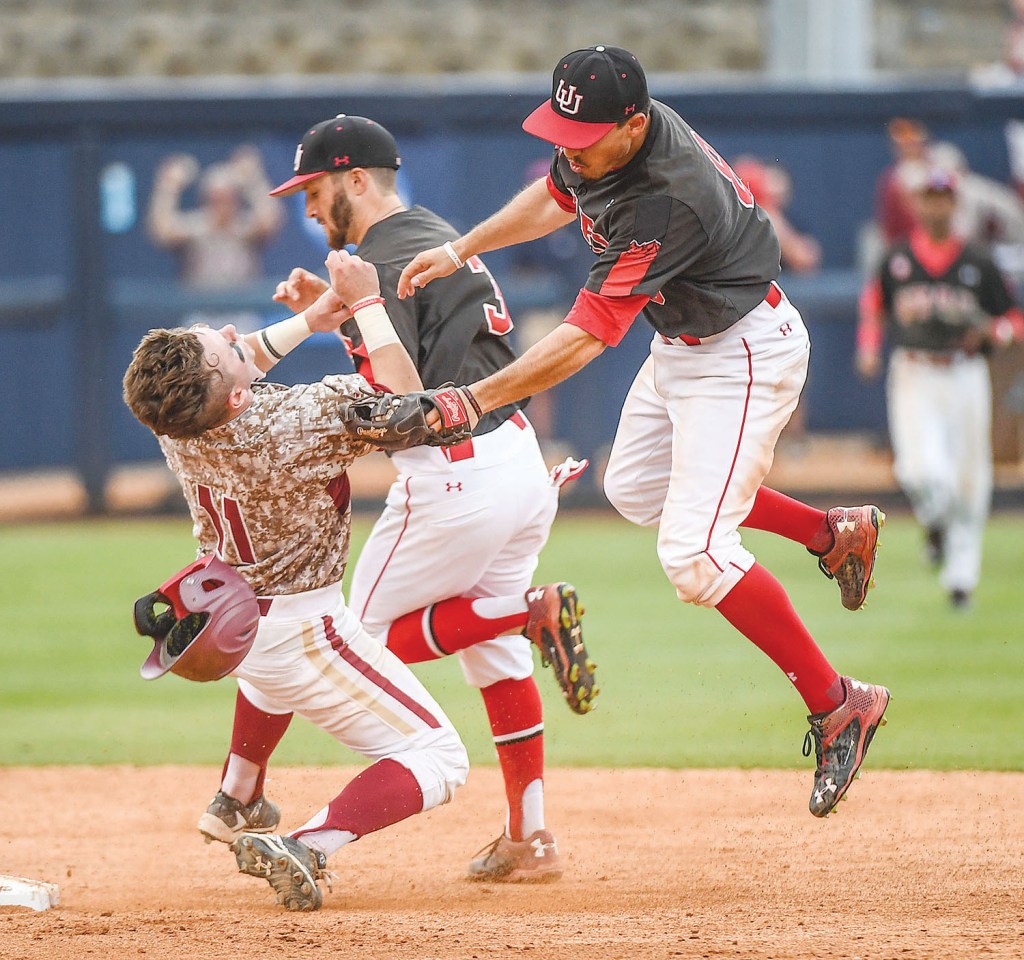 Boston College second baseman Jake Palomaki (11) collides with Utah infielder Cody Scaggari (8) during an Oxford Regional college baseball tournament game at Oxford-University Stadium in Oxford on Saturday. Boston College advanced to the championship where it will await the winner of today’s elimination game between Utah and Tulane.(Bruce Newman)

Boston College is one win away from a trip down south and making one super regional an all-Atlantic Coast Conference affair.

The No. 3-seeded Eagles scored three runs in the bottom of the seventh to rally back to defeat No. 4 seed Utah 4-3 in the winner’s bracket of the Oxford Regional at Oxford-University Stadium on Saturday evening.

“If you got to see the second half of our season, we’ve had our backs against the wall multiple times,” Boston College coach Mike Gambino said. “We’ve been playing playoff baseball for the past six weeks, I think. Offensively, we couldn’t get anything going, but (starter Mike King) knows that if he just stays in it and keeps us in the game, they’ll get his back.”

Boston College (33-20) now waits for the winner of the Tulane-Utah elimination game that will take place at 1 p.m. today. The regional championship is set for 5 p.m.

The Utes (26-28) got on the board first with two runs in the top of the first inning. Designated hitter Kellen Marruffo had an RBI double followed by first baseman Hunter Simmons with an RBI single. The third run came in the fourth when shortstop Cody Scaggari hit an RBI single up the middle to give the Utes a 3-0 lead midway through the game.

Boston College took advantage of the Utah bullpen, scoring three runs after starter Dalton Carroll came out of the game in the seventh.

“In the beginning, we started out hot,” Scaggari said. “Then (Boston College) started mixing stuff up and we struggled.”

Boston College made it to the winner’s bracket after defeating Tulane 7-2 in the Oxford Regional opener on Friday afternoon.

On the shoulders of ace Justin Dunn and some timely offense, the Eagles handled the Green Wave easily to reach the 1-0 game. Dunn worked seven innings, giving up both runs, all earned, while striking out 11 Tulane batters. He issued one free pass.

The Eagles got on the board first with two runs in the third inning then added two more in the sixth for a 4-0 lead. Tulane responded with two runs of its own in the bottom half of the frame, but that would be all Dunn and reliever Bobby Skogsbergh would allow the rest of the game.

“It was one of my better ones for sure,” Dunn said of his outing. “I basically had all four pitches going. If the changeup was there a little better, I think I could have gotten a little bit deeper into the game. I thought I had pretty good fastball command, which was big. I was able to pitch in and jam them a little bit.”

Tulane starter Emerson Gibbs also worked seven innings but was responsible for five runs, four of them earned, off of six hits.