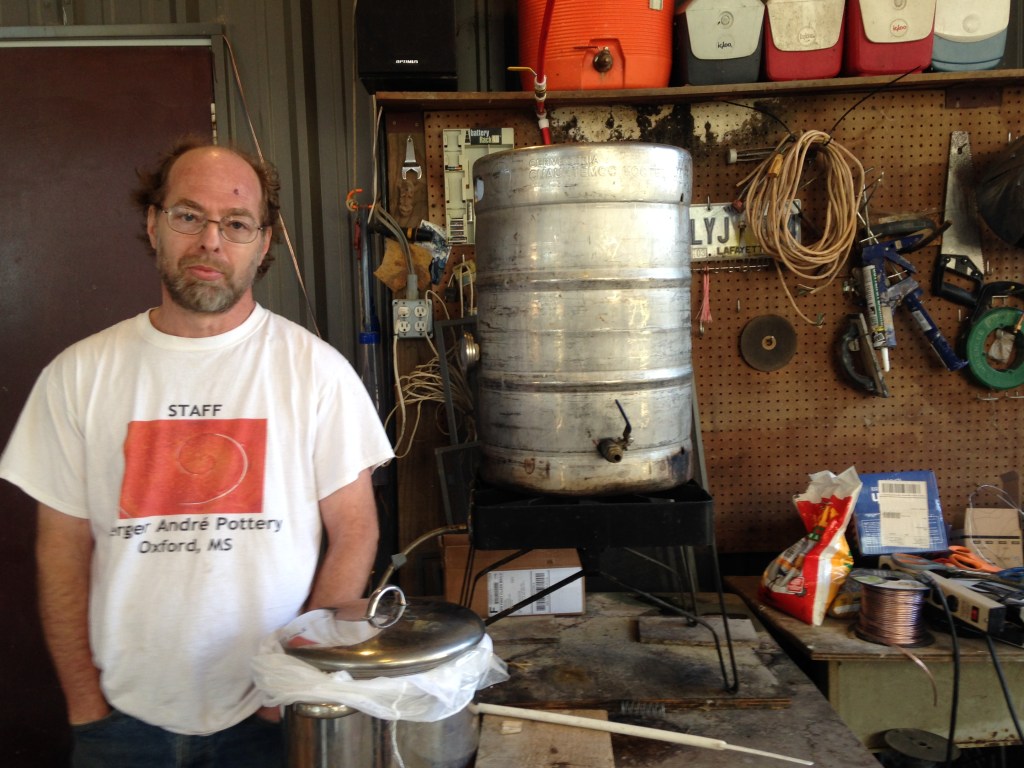 Jackson native Yerger André, 51, is many things: a husband, a father, a craftsman, a beer brewer, a traveler, a Peace Corps worker and so much more. However, the University of Mississippi alum is best known in the Oxford community for his pottery that is sold at Southside Art Gallery.

He has been selling through Southside for years. “It is my favorite gallery, and I love the way they display my work,” he said.

Wil Cook, Southside Gallery director, said André’s ceramics, specifically his glazes, are some of the most unique works he has ever seen.

“The crystalline glazes give the surface of his vessels a polished look that some people who have visited the gallery have confused for blown glass,” he said.

Cook said André’s forms are elegant and graceful, and the gallery has been carrying his pieces for more than 10 years. André also has shown at the Ogden Museum of Southern Art in New Orleans, the National Arts Club in New York, the Kentucky Arts and Crafts Foundation and the Mississippi Museum of Art among others. His work is collected nationally and internationally.

André was a student of philosophy and art at Ole Miss, worked as an apprentice at Brandon Stoneware in Brandon, and studied at the Fenland School of Crafts in North Carolina. He has been a longtime member of the Craftsmen’s Guild of Mississippi, where he won the Guilds’ Heritage award for excellence in craft in 2009.

His work includes a full line of functional stoneware complete with bowls, platters, plates and cups. He also produces decorative porcelain vases and bottles with crystalline glazes on the surface.

In order to get the glaze just right, André experiments with new glazes and shapes and tinkers with the cooling temperatures of the kiln. The crystal glazes range in appearance from a high-gloss look, with large crystals, to ones that appears matte or marble like.

Using a computer that he programs himself, André controls the cool-down phase of the kiln. Crystals form between 1,850 to 2,050 degrees Fahrenheit and, because the glazes are thick and sticky, their consistency dances the line between solid and liquid.

That means the glaze can easily slide off of the vase or bottle. André crafts a pedestal and glues it to each piece before firing, with a catch basin for the runoff. After firing is complete, a blow torch is used to cut the ceramic off of the pedestal.

André’s wife, Laura Johnson, is a professor of psychology at Ole Miss. She calls him a master on the wheel and with all of the technical aspects, such as his glaze chemistry and complicated firing cycles.

“The forms and the glazes remind me of blown glass more than clay,” she said. “I love the organic shapes of the pots and the crystal formations in the glazes.”

Johnson also attributes the inviting aesthetic of his pottery to its resemblance of nature.

“The agate, wood grains, snowflakes, moss and stars — they show up in the work as well, and that has an obvious attraction,” she said.

André and Johnson live with their two children in a one-room, 1,440-square-foot metal structure in

Abbeville, about 10 miles from the Ole Miss campus.

The structure is an eccentric, open area full of vibrant colors, artwork, trinkets, textiles and tribal patterns. In the kitchen, there’s a fridge, sink and dishwasher against the left wall. A lone coffeepot sits on the counter, and nearby metal shelves house pantry items and a large, black radio that is broadcasting NPR news.

A long, wooden table with eight chairs covered in a tribal tablecloth is the centerpiece of the room. Bedrooms are sectioned off with hanging draped fabric, and a lofted room with a wooden ladder and railing made of branches occupies the right, front corner of the space.

Altogether, the home is minimalistic, simplistic and refreshing. It has everything you need, without the hassle and bother of everything you don’t. Life is simple, streamlined and a visitor can catch a glimpse of the families cultured history, love of nature and travel and memories that have painted their lives.

“We live on 39 acres between the university’s Biological Field Station and the Holly Springs National Forest,” André said. The property is home to beautiful groomed walking trails, two ponds, ridge views, forest, creek and flora and fauna. Puskus Lake is one mile east.

The structure was originally meant to be the home of André’s pottery studio. It is custom built with large windows and is heated by a wood-burning stove. Johnson said the family originally thought they would live in the space for one to three years, but they are going on 12 now.

“When the kids were young,” she said, “It was great because scooters, tricycles, hula-hooping and a disco ball made the studio a fun place for them and their friends.”

On the other hand, the togetherness and lack of privacy can be challenging at times because the kids are now teenagers.

“We may complain a lot about the outhouse in the winter or having no walls and doors,” she said, “but we love the nature out here, and no one wants to move into town.”

André said because his space is currently limited due to the fact that his family is living there, he has to work outdoors, which is wonderful when the weather is perfect, but difficult when it is not.

The uniqueness of the studio and the space it provides allows André to practice another of his hobbies and pastimes, brewing beer. He has been brewing on and off for about 36 years and discovered the art at the age of 15.

“I like to experiment with different things,” André said, “Mostly the Sierra Nevada type.”

In addition to raising a family, creating pottery and brewing, André and Johnson spent time in the Peace Corps.

“I really wanted adventure,” André said. “I wanted to go to the most remote place I could.”

In 1993, he and Johnson were placed for two years in Ubaigubi, a tiny village in the Eastern Highlands of Papua New Guinea. André felt like he’d won the lottery. The couple lived in a remote bamboo building in a two-house hamlet in the mountains. They were a 45-minute hike away from the actual village.

“Before we left, we received intensive training of the language spoken by the educated few, Melanesian Pidgin, a hotchpotch of Dutch, English, German and several other languages,” André said.

During his time there, André worked with traditional crafts, cooperative with the pottery, including traditional bows and arrows, spears, shields and woven bags sold at fair trade prices. The bags were made with the yuka plant for women to use to carry firewood. They would place the strap around their head and carry the bags on their back.

When the day comes, André and Johnson look forward to building a house on their property and opening the studio up for more potters.

“I think that if and when we do build a house, we will miss the space and time together,” Johnson said. “Also, I think it helps give us all a constant reality check about what a house is and what is actually needed to thrive.”

André said they may rent space to other artists and/or have some apprenticeships and intern opportunities for local university students.

“Ideally, we would like to add some cabins as well for visiting artists, graduate students and general North Mississippi [creative type],” he said.