Artists throw back to olden times 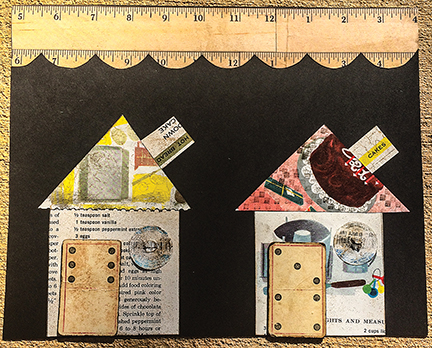 Bozarts Gallery will be home to a show this summer that flashes back to the home economic days. The art, like these from Oxford’s Andi Bedsworth, will be on display starting Saturday and go through July 30. The show will feature several artists.

Some people think that canning tomatoes and making their own clothing are for old-timers, but Bozarts Gallery’s new exhibit is revamping the concept of home economics for a new generation of artists.

Home economics goes back to a time where homes were self-sufficient and families made things for themselves rather than buying them at the store. In the years of World War II, food was rationed, at a fixed amount, and many households had to cut back on spending to support the war. Many women had to take classes to learn how to can their own food, sew their own clothing and clean in cost-efficient ways.

Starting June 11, Bozarts Gallery, located on 403 North Main St. in Water Valley, will feature art that transcends to this time period, featuring women working at home to supply families with food and clothing made from scratch.

The exhibit will last until July 30, and will feature artists such as Andi Bedsworth, Brad Cushman, Katherine Strause, Pati D’amico, and will spotlight the art of Beth Long. The Southern artists will depict home economics with a mixture of medias such as photography, oil painting and fabric-arts.

Husband and wife duo Annette Trefzer and Mickey Howley bought the former drug store in 2005 and renovated it into a professional gallery space. Bozarts opened in 2008, and acts as a place where artists and non-artists can come together to meet and talk about art. Trefzer and Howley also founded artist collective, a group of local artists, whose art is featured in the gallery regularly in six shows per year.

“As a local arts alliance, we attempt to bring cutting-edge and avant-garde shows to the public,” Trefzer said. “We are interested in exploring artistic concepts, shows and installations not primarily driven by commercial impulses of the market. Thus the gallery fosters the freedom to create, experiment and take risks.”

Much the same way the owners renovated an old historic building 10 years ago, so are the artists revamping a forgotten way of life. One of the show’s intentions is to boost a renewed interest in home-grown and homemade products.

“I am focusing my work on the Home Economics show on sewing, cooking and the idea of home,” Bedsworth said. “I am a seamstress and I am using many old pattern pieces, and sewing notions to make collages of houses. I am even using pockets from clothing and pages from old cookbooks. The vintage pieces I am using in my work are combined with new items and basically symbolizes that even though many people do not sew like they used to, it is an important part of my life.”

The show will also honor the work of the many women who help to turn a house into a home.

“Home work was, and still is, largely women’s work and the artists in this show pay homage to labor and leisure in various different media, ranging from painting to photography, and from collages to fabric work,” Trefzer said.

The gallery will be open to the public starting June 11 after the current exhibit, Spring Sirens, is finished and will have refreshments with a 1950’s feel.

“It’s a fun and quirky show that makes you think about the home-making skills of our grandmothers,” Trefzer said. “Many of the images of cooking, canning, cleaning, sowing and such have a nostalgic feel. But the show is not only about the past; it is about renewed interest in the home-cooked and homemade. I think the artists are capturing a past subject from a contemporary perspective.”