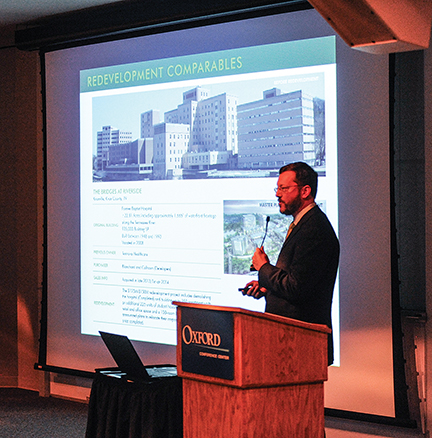 Johnny Lamberson discusses the disposition of Baptist Memorial Hospital-North Mississippi, during a meeting at the Oxford Conference Center in Oxford, Miss. on Monday, June 6, 2016.

While only a few people offered suggestions and opinions on what the current Baptist Memorial Hospital-North Mississippi facility should be used for once the new hospital is up and running, most want to see the facility used to help senior citizens and nonprofit organizations.

The meeting was held at the Oxford Conference Center Monday night and hosted by Baptist to fulfill one of the requirements set forth in the sale agreement between Baptist, the city of Oxford and Lafayette County when Baptist purchased the hospital from the two local governments in 2012.

“One of those requirements was to implement a process to solicit feedback from the public on the disposition or use of the current facility,” said Bill Henning, administrator and CEO of BMH in Oxford.

One of the committee’s jobs is to provide input and gather additional suggestions from the community on what uses would be a good fit for the surrounding neighborhood and Oxford.

Baptist has contracted with CBRE Group, the world’s largest real estate investment manager, to help with the disposition of the current facility.

“They will help us market the property,” Henning said Monday evening. The new hospital is scheduled to start taking patients in November 2017. Baptist leased the hospital from the city of Oxford and Lafayette County since 1989 until it purchased the building and land in 2012 for $60 million that was split equally between Oxford and Lafayette County. Most of those funds have been invested, with the two governments using the interest to help fund local projects.

Kevin Adams and Johnny Lamberson with CBRE spoke briefly at the meeting and showed some examples from around the country of how some other for- mer hospital facilities were repurposed, which included a senior housing facility, a large, mixed-use development and a parking lot and green space for another nearby hospital.

“Who wants to buy it? We believe a developer will buy this property,” Lamberson said.

Henning said CBRE has “marching orders,” and will be provided the input and suggestions received by the committee and the community when looking for a buyer.

“What we don’t want is a boarded-up building sitting on South Lamar,” Henning said. “We’d like to see it redeveloped, and worst-case scenario, taken down and the land used for something else. But there’s a real push to find a new use that will be the best fit for the city, neighborhood and Baptist.”

Resident Mickey Smith, who was part of the original committee to bring Baptist to Oxford in the 1980s and one of 20 to attend Monday’s event, said his concern is for the nearby neighborhoods.

“They’re going to be neighbors to someone eventually, and it will affect traffic in the area,” he said. “I simply suggest you meet with these people and listen to their concerns.”

Teresa Adams, executive director of Leap Frog, asked the committee to consider turning the facility into a one-stop center for nonprof- it organizations. Adams said her program, as many other nonprofits in Oxford, are running out of room and that real estate in Oxford is too expensive for most nonprofits.

“We’ve seen other communities, turn buildings like this into a nonprofit community center where projects like mine, The Pantry, Boys & Girls Club, could be in one central space,” she said. “We’d like to see a counsel- or, social worker and physician there, to help serve these families who are struggling.”

Adams said the building could also house the Oxford Activity Center, which is also outgrowing its current facility.

Allen Harris, a retired minister of music, said the area needs more afford- able housing for senior citizens and that the current hospital could be easily remodeled for that use.

“It being so close to the new hospital makes it an ideal location for something of this nature,” Harris said at the meeting. “And there’s enough space it could incorporate the other ideas heard here tonight as well.”

Resident Ed Sisson asked Henning if the hospital is looking to get a maximum return on the sale of the hospital.

“There’re several factors to consider,” Henning said. “What’s the value? How can it be utilized within the city’s plans? What would the planning commission allow? We don’t even know right now what the level of interest will be. We’re continuing to explore all of that.

“We will look for something that hits all the parameters — best use, best for the neighborhood, best value for Baptist, and try to bring all of those things together.”

Sisson thanked Baptist for bringing quality health care to Oxford and making it a better place to live.

“I hope, in that same tradition, you consider the use of this property for something that will also make Oxford a better place to live for all citizens.”