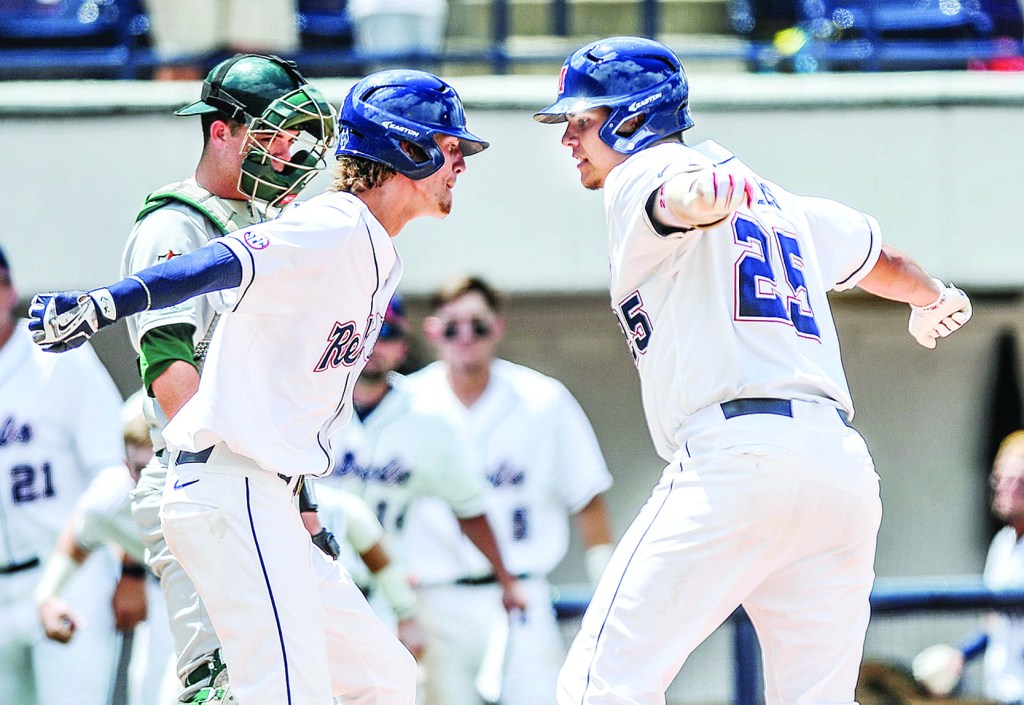 Ole Miss’ offense, including Ryan Olenek, left, and Colby Bortles, went from hot in the Southeastern Conference tournament to cold in the Oxford Regional. That along with a taxed bullpen doomed the top-seeded Rebels in an 0-2 regional showing that ended their season. (Bruce Newman)

The feeling in the Ole Miss clubhouse after falling to Tulane in the first elimination game of the Oxford Regional could be summed up in two words.

“It sucks,” third baseman Colby Bortles said as he was choking back tears in the postgame press conference on Saturday.

For the second year in a row, the Rebels went 0-2 in a regional and were shown a quick exit out of the NCAA baseball tournament.

Last season, it was not as big of a shock, though still surprising, as Ole Miss floundered around a .500 record all season and just ran into a good Maryland pitcher and a hot Cal State-Bakersfield team in Los Angeles.

The outcome of this season rattled the team and everyone inside Oxford-University Stadium as Tulane’s Jake Rogers hit a two-run home run in the ninth inning to send the Rebels home.

The reason is due to Ole Miss staying inside the top-15 rankings all season long and earning another 40-win season as well as the second best non-conference record under Mike Bianco at 22-4.

“I just feel awful for my guys,” Bianco said after Saturday’s loss. “I’m just so proud of this team. A year where I don’t know if many expected this, to be playing baseball in June in Oxford. I know those guys did.”

The offense was a key cog in the machine that helped the Rebels have the year they did with Bortles, center fielder J.B. Woodman and catcher Henri Lartigue catching fire late in the year and carrying over into the Southeastern Conference tournament in Hoover, Alabama. The trio hit over .400 in the tournament but struggled once the regional got here, going 5-for-25 (.200) with two runs batted in and a home run from Bortles against Tulane.

“Not much changed,” Bortles said of the offense’s approach at Hoover and in Oxford. “We still swung it well. There’s a lot of good (defensive) plays out there. We had some chances, guys on base where we didn’t come through the last two games. We did definitely come through at Hoover, and I think that was the main thing.”

Stumbling out of the ‘pen
What had been a strength and helped the Rebels win more games than even the offense at times was the bullpen.

During non-conference play, the Ole Miss relievers had a sub-2 earned run average and kept it low for most of the SEC slate as well.

It was not the case the semifinals of the SEC Tournament, where Ole Miss blew a five-run lead late. It carried over into the regional with two blown leads against Utah and Tulane.

Wyatt Short gave up a home run against Texas A&M to help the Aggies complete the SEC semifinal comeback as well as the winning single for the Utes in a 6-5 loss that went 10 innings Friday.

Will Stokes, who had been pitching better than Short in the final week or two, gave up the Rogers home run with one out in the ninth inning of Saturday’s elimination game.

It was not just the setup man and closer that struggled as redshirt freshman Brady Feigl came in against Utah in the sixth inning and coughed up three runs on two hits in less than an inning’s worth of work to allow the Utes to force extra baseball.

“That will be the thing where you look back and go, ‘What could I have done?’” Bianco said about the bullpen’s struggles the final three games. “Was there something different? Did we tax the bullpen too much? Did we lean on them too much?”