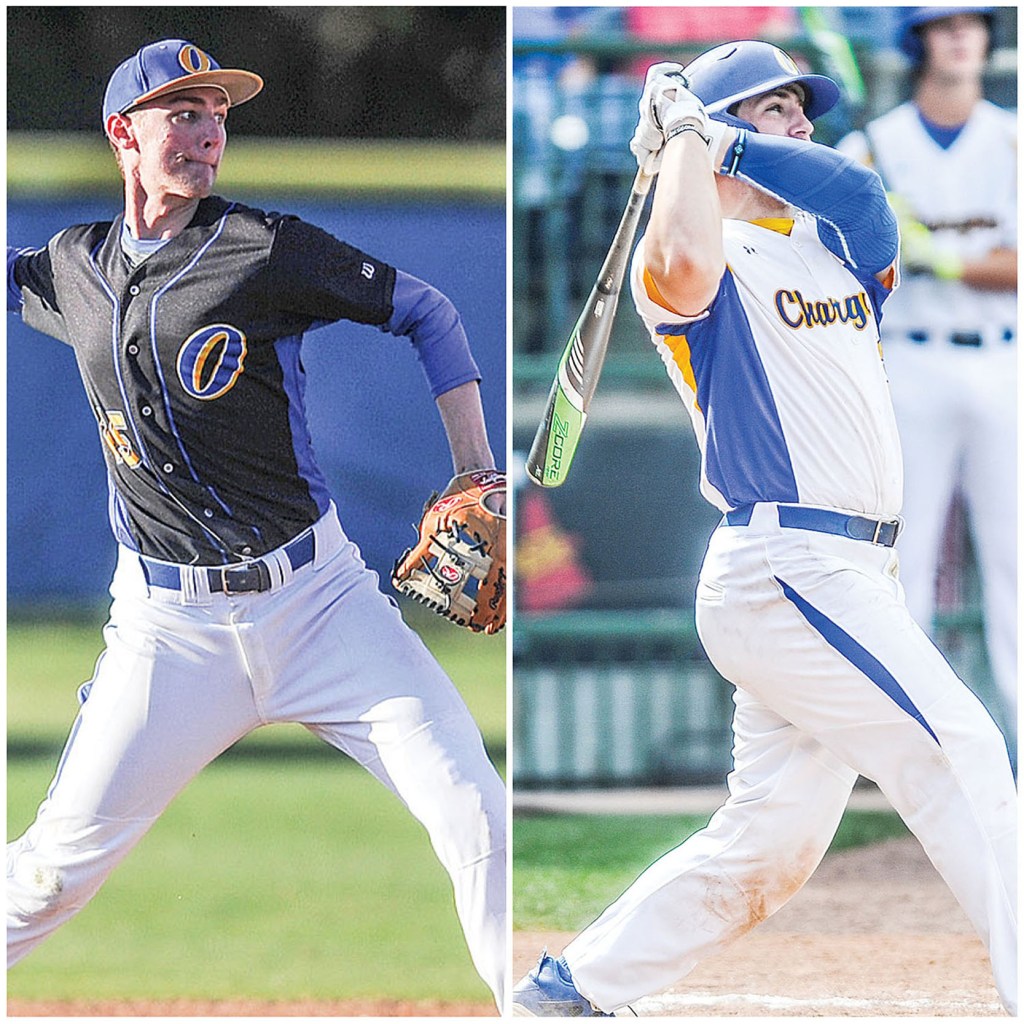 Oxford’s Grae Kessinger, left, and Thomas Dillard are projected to go in the top 10 rounds of this year’s Major League Baseball First-Year Player Draft. Both have signed with Ole Miss. (Photos by Bruce Newman)

Never have Thomas Dillard and Grae Kessinger been more thankful for lakes and golf courses than they are right now.

The former Oxford baseball standouts are getting to spend more time there with their final high school seasons behind them. Kessinger hits the local links where his father, Kevin, playfully jabs that his son “still can’t beat me” while Dillard likes to make the short drive to Sardis Lake for some fishing and swimming.

But both venues have served as a personal oasis this week as Dillard and Kessinger try to keep their respective minds off the question that seemingly everyone wants answered about the pair of Major League Baseball draft prospects: Will it be college or pro?

Kessinger and Dillard have both signed with Ole Miss along with teammates Jason Barber and Houston Roth, but the interest from professional teams is heavy enough that both will likely have that decision to make once the draft is over. This year’s draft will start Thursday with the final 38 rounds being held Friday and Saturday.

Kessinger and Dillard are among the state’s top prep draft prospects along with George County’s Walker Robbins, but neither is projected to be selected in the first round. After that, it’s anyone’s guess.

Kevin said “the feeling is anywhere from round 2 to round 5” for Grae to be picked based on conversations the family has had with teams, a range that’s close to what MLB.com draft and prospect expert Jim Callis said he’s heard from teams that are interested.

Callis, who covers Mississippi prospects for the draft, said Dillard’s talent would likely have him coming off the board anywhere from rounds 6-10. Dillard’s father, Tom, said his son has also been told an unspecified range of when he could be picked, but “I think it’s pretty much pure speculation at this point,” Tom added.

Both appeal to professional teams in different ways.

Grae, who has worked out privately for the San Diego Padres and Texas Rangers, is one of the draft’s best defensive high school shortstops with a rangy 6-foot-2, 180-pound frame that can be bulked up in the future. He’s the grandson of six-time MLB All-Star Don Kessinger and the nephew of former Major Leaguer Keith Kessinger while Kevin was also drafted out of Ole Miss, so the bloodlines don’t hurt either.

And a lack of additional high-end talent at his position could make Grae an even hotter commodity this year.

“It’s a terrible, terrible draft for shortstops, and he’s a legitimate shortstop,” Callis said. “He’s got a chance to be a very good one. He’s got good hands and a plus arm, instincts, and (he is) fundamentally sound.”

Thomas’ allure is his bat, tantalizing teams with plus power from both sides of the plate. A switch-hitting catcher with an advanced approach, Thomas led Oxford with a .438 average this season and still leads the nation with 16 home runs, according to MaxPreps.

Callis said some teams question whether Thomas’ defensive future is at catcher, but Thomas and his father both said that conversation has died down with teams that are high on the 6-foot, 220-pounder. Two of them, the Boston Red Sox and Philadelphia Phillies, put Thomas through pre-draft workouts.

“We’ve heard less and less about that since he’s actually put in the hours and time to improve,” Tom said.

It’s one thing to like a player. It’s another thing for teams to gauge his signability.

Before the draft, prospects come up with a dollar amount they’re seeking for a signing bonus that they believe is fair based on the slot value of where they’re picked. Each team has a different amount of money it can spend on draft bonuses with the Cincinnati Reds having the highest bonus pool for the first 10 rounds this year at $13,923,700, according to MLB.com.

Thomas knows the amount it will take to get him to skip out on college and get his professional career started early, though Tom said the family is keeping that figure to itself. Grae said he’ll have his number finalized for teams before the draft begins, but “we’ve given them a pretty good range,” Kevin said.

Teams that know they won’t be able to match the asking price likely won’t risk wasting an early draft pick, which could mean a slide into later rounds for some players.

“The day of the draft, if people call and say will you sign for this, it will be an easy yes or no,” Grae said. “Less stress involved, which will be good.”

Neither Thomas nor Grae classify Ole Miss as a backup plan if they don’t get what they’re looking for financially. Grae, a lifelong fan, said playing for the Rebels has always been “my dream” while Thomas is looking forward to playing with Grae, Barber and Roth for a few more years should it happen after the foursome helped lead Oxford to a second straight MHSAA Class 5A title.

“That would be a crazy thing to have all four us go to Ole Miss and play together again, especially after the season we’ve had,” Thomas said.

But if the money’s right, the question of college or pro will have to be answered by Grae and Thomas and them alone.

“The true Ole Miss fans don’t even ask me that,” Kevin said. “The question is, ‘You’re not going to let Grae sign, are you?’ First off, we don’t make this decision. Secondly, the best analogy I can use is if your son always wanted to be a computer programmer and he graduates from high school and Google comes up to him and says, ‘Here’s a big check. Come work for us doing programming,’ are you going to look at your son and say, ‘No, go to school first. Then you can take it.’ And they go, ‘Well, no.’

“All Grae has ever wanted to do is play baseball. I think his first word was ball. His mom and I laugh. This is literally what we’ve done. So we would never say, ‘No Grae, you can’t.’ But we can advise of what we feel would be worth while, and that’s what we’ve done.”

Said Thomas, “I’m excited for it. I think it’s a great opportunity. I think I have a good opportunity either way I choose.”