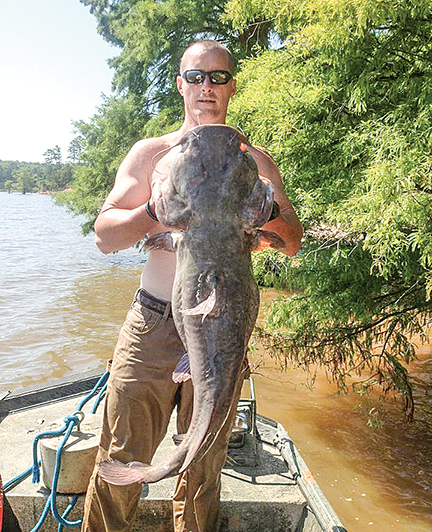 Brion Whitten has been grabbling since he was a kid.

Grabbling is a sport. Although it may seem unorthodox to some, it is a challenge to those who attempt to capture the largest catfish barehanded.

For the fifth time, the North Mississippi Grabbling Tournament will be held on Saturday at Sardis Lake’s Engineer’s Point.

Organizer Brion Whitten said 19 three-person teams from all over Mississippi will be vying for bragging rights, along with cash prizes and trophies for first through third place. The teams will bring in their three largest fish, which can be grabbled anywhere but must be alive, to the weigh-in.

Grabbling, which is also known by several other terms – including noodling, has been a popular sport for several decades but in recent years has gained in notoriety with tournaments and prize money.

Whitten, who has been grabbling since the age of 15, went on his first grabbling adventure with his dad.

“I didn’t actually catch one that day, but just watching I knew I wanted to try it for myself,” Whitten said.

Whitten began researching how to grabble and all that was involved.

“I found that catfish like to hide in stumps, rock beds, brush piles and anything that provides cover for them to spawn,” Whitten said. “During late spring, you can reach into these holes where they are spawning and catch these very large fish.”

Whitten began grabbling in rocks in Enid Lake near Water Valley. He said he will never forget getting bit for the first time.

“Once I had gotten bit and caught my first fish, I was hooked,” Whitten said – no pun intended.

Whitten realized that he could catch bigger fish by building wooden boxes for the fish to spawn in.

“By building boxes and putting them in the lake for the fish to spawn in, you can determine how big of a fish can use the box,” Whitten said. “The bigger the box, most of the time means bigger fish.”

Whitten builds his boxes 4-feet wide by 5-feet long and at least 16-inches deep with no bottom.

He advises that using a partner to grabble is a wise decision.

“Some of the fish you catch can be upwards of 80 pounds,” Whitten said. His personal best is 67 pounds.

Whitten, a former U.S. Marine who served three tours in Iraq, began the statewide tournament as a means to assist his fellow brothers in arms with proceeds from the event benefiting veterans.

“I saw the need to help my fellow service members who struggle to adjust to life back home,” Whitten said. “It fills the calling to help others and my love for the sport of grabbling.”

The four veterans who will be honored this year will be introduced on stage.

“I found that people are more willing to give if they can see exactly where their money is going,” Whitten said. “We just want them (veterans) to know they are not forgotten and freedom isn’t free.”

Now a member of the Oxford Fire Department, Whitten said it is too late to register for this year’s event, but encourages folks to come out and support military veterans and see some monster catfish.

“This year we are also trying to go a little bigger for the spectators,” Whitten said. “We are going to have live music, a bouncy house, and a viewing tank for some of the huge fish. We also hope to have some sort of food. We would like to encourage everyone to attend. This is a family and Christian oriented event. It really is fun for the whole family.”