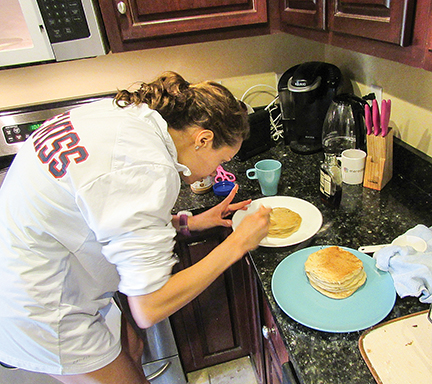 It’s 10 a.m. on a sunny Wednesday morning, and while some Ole Miss seniors are getting out of bed, frantically trying to find a printer before their 11 a.m. class, or in fact sleeping through their 10 a.m. class, Mary Alex England, a senior accounting major from Cary, North Carolina has already had track practice, ran 7 miles, prepped for her 2:30 p.m. class and has time to make herself a nice peanut butter pancake breakfast.

England is approachable, easy to talk to and will have you laughing within seconds, but when she is in the kitchen or on the track, she is fiercely competitive.

“I love to run because I’m damn competitive, and I don’t know what I would do without running,” she said. “I love the post-race high and seeing hard work pay off, and racing burns off pancakes, which is always a plus.”

England’s love of running started her senior year in high school when she ran cross-country. Running didn’t enter her life again until the second semester of her freshman year in college when she decided she missed being athletically competitive (she was a competitive swimmer for 10 years) and wanted to get in shape.

England decided to talk to the Ole Miss track coach at the time about walking onto the team. The coach told her to increase her mileage and train in order to have a chance at a try out in the fall.

“So, over the summer, I worked my butt off and made up workouts, and did long runs and weights on my own, and increased my mileage,” she said. “Then in the fall, I ran 3 miles at Lamar Park as a time trial, and she (the coach) deemed my time fast enough to be on the team, and I guess it’s just history from there.”

England, a 2015-2016 Ole Miss Who’s Who award recipient, and a 5000 and 1000 race runner, balances the busy student-athlete life of schoolwork, practices and traveling by sticking to a schedule.

“Often when we’re in season, which for distance running, it’s all the time because of cross country, indoor track, and outdoor track, we miss a lot of school, so that’s difficult for making up material and tests and such. It’s also hard when your non-track friends are like, ‘Hey! Let’s go have fun tonight!’ and I’m like, ‘Hey! It’s 8:30, and I’m about to go to bed,’ but it’s definitely worth it.”

When England is not in practice or at school you can find her at home in her kitchen making pancakes for teammates and friends. England credits pancakes as the perfect fuel to make it through the day and on the track.

“I would go for longer runs on Sunday and fuel up after with pancakes,” she said. “Then I began experimenting with all the different kinds of pancakes.”

England is a sucker for banana chocolate chip pancakes and loves the breakfast favorite because of their versatility.

“You can make any type of pancake,” she said. “One time I made pizza pancakes and, call them weird, but they were so delightful and pizza-licious. The possibilities are truly endless.”

Her love of pancakes has not only fueled her long runs, but has also inspired a pancake Instagram account with no waffles allowed.

“One Sunday, I just thought of the idea to make a pancake Instagram and mentioned it to my roommate,” she said. “Then she dared me to make one, and I didn’t think twice, and then, @maplesyrupinmybag_swag was created.”

As for the future, pancakes and running will continue to be present in England’s life. She plans to continue running after college and “keep things exciting” by competing in triathlons. As for her pancake Instagram account, she dreams her love of pancakes will reach thousands of people.

“I dream of getting free maple syrup and having thousands and thousands of followers, and just post pics of pancakes all day, and opening a pancake restaurant,” England said.