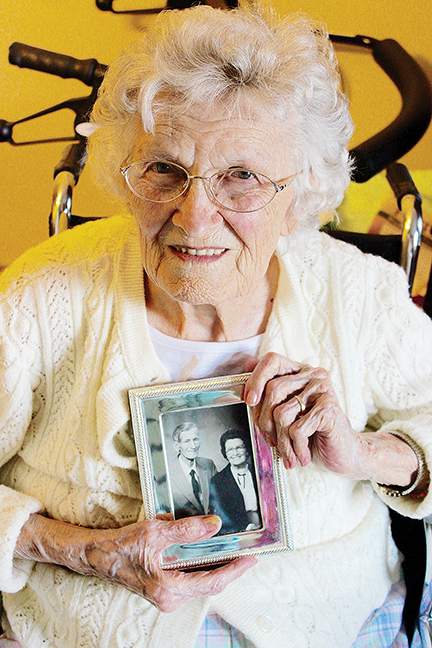 Allen Brewer Lorene White, who celebrated her 102 birthday on May 26, holds a photo of herself and her late husband, Halbert White.

With a life span that exceeds 10 decades, Lorene Lantrit White has seen a lot of change in her lifetime.

Now living in the Yalobusha Nursing Home, White is a walking history book of information dating back to WWI.

White was born into the Lantrit family in 1914 in Calhoun County.  After moving to Toccopola to attend school, she married her husband, Halbert White, in 1935. White later became a hairdresser in the Toccopola Beauty Shop in the 1950s and worked there for about 18 years.

“She was always a super nice lady,” said Ben Ratliff, member of the Toccopola community. “She would always be there to cut the hair of all the boys in the community.”

She later moved to Oxford where she stayed for four years before being moved to Water Valley. Even after her move, White still has a large impact on the people she met in her short stay in Oxford.

“If I ever wanted to be a hero, I want to be like her,” said Linda Spence, White’s neighbor of four years. “I would not be the person I am today without her in my path.”

White says that one of the secrets to her long life was to cut out salt from her diet. Salt has been known to raise blood pressure. She said her transition to eating less salt has helped reduce her swollen ankles and to feel less dizzy.

“It was hard, but I have done it and I feel better,” White said.

“I am a lover of the Lord with all my heart,” White said. “We have been blessed.”

On May 26, White celebrated her birthday with a small gathering at the Yalobusha Nursing Home that was attended by family and friends.

White said she lives each day at a time while looking back at the past and looking forward to the future.

Artists throw back to olden times