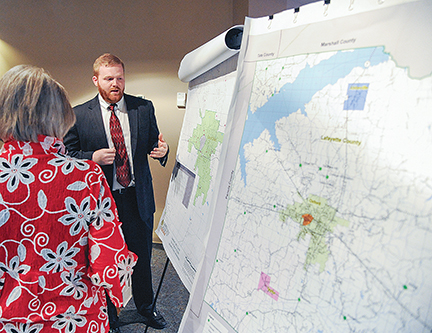 Jake Grabowsky of Mike Slaughter & Associates discusses a map with some of those attending a meeting for a comprehensive plan for Lafayette County, at the Oxford Conference Center in Oxford, Miss. on Thursday, June 9, 2016.

Lafayette County officials are not psychics but they are looking into the future for the next couple of decades and what they see is growth that will cause more change to the fastest growing county in the state and one of the fastest growing in the nation.

On Thursday evening, they hosted their latest town hall meeting at the Oxford Conference Center to give residents an opportunity to voice their thoughts, concerns and ideas about the process of updating the county’s comprehensive plan, which is designed to be a guide toward controlling that change and growth that is expected to come.

“Change is coming,” said supervisor Kevin Frye. “People are going to come because it’s a great place to live.”

A few dozen residents came out for the third in a series of town hall meetings, and like the previous two, asked several questions of Slaughter and county officials, ranging from affordable housing — or the lack thereof — to the need for protecting walking trails from developers.

Residents also posed questions about the current Baptist Memorial Hospital facility and current Baptist Memorial Hospital-North Mississippi facility and its future. They also inquired about other county-owned facilities and how much land the county owns and if those areas would be considered as far as the land use component of the comprehensive plan.

And of course zoning, which has been a hot-button topic ever since the supervisors announced devising an up-to-date comprehensive plan.

Slaughter has been hired by the county to draft a zoning ordinance, but it has not been finalized or voted upon by the supervisors.

Additional hearings on zoning will be held later after the comprehensive plan is finalized, Frye told the crowd.

The discussion also included the tech driven industry, creating a workforce that is mainly from Lafayette County rather than from surrounding counties, and the need for better ambulance service.

Supervisor Chad McLarty told the crowd the ambulance issue is a concern, but is being addressed. Baptist has three ambulances running in the county, one is a transport ambulance.

“We are looking at other alternatives with the fire departments using paramedics,” McLarty said. “This is a concern and we are on top of this to get adequate ambulance service for everyone in the county.”

On the subject of developing workforce training, supervisor Mike Roberts said that both public school systems should find a way to utilize the Oxford-Lafayette School of Applied Technology more than they have in recent years.

He said both school systems do a great job in education, but lack for whatever reason job training.

“Not every kid will go to college and we need to find a way to teach them a job skill,” Roberts said.

Slaughter said that normally a comprehensive plan is reviewed every five years, but due to the rapid growth currently being experienced in the county and expected in the future, he would think the plan could be reviewed every two years.

“Development is going to occur and we want to ensure it is a positive for the community,” Slaughter said. “These are all great ideas that will be considered as we go forward with the comprehensive plan.”