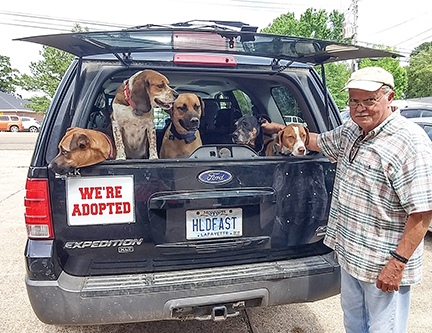 William Rogers and Laura Beth Cox don’t just work together — they have a mutual love for animals that enables them to open up their homes and workspace to save lives.

Rogers, an attorney, owns several rental properties that Rental Central helps manage. Cox works with Rental Central and is Rogers’ legal secretary. The two have worked together for about two years and during that time Cox has always had a foster dog.

“Laura Beth has a long history before she even came here of fostering dogs with the shelter,” Rogers said. “I had been working with the shelter for about eight years or so, and I tend to gravitate toward dogs out there that have little chance of being adopted. So when Laura Beth had her last foster dog adopted, I just influenced her into taking (another) one. Laura Beth took her up, but she had one condition: it was that all the adoptable dogs had to be brought to the office during the day, and that was OK with me.”

That first dog to visit work every day was Emma, who was adopted in four months. So Cox moved on to her sixth foster dog, Toots, who visits Rental Central daily. Toots, an 8-month-old pitbull mix, weighs about 40 pounds and gets along with other dogs and cats. What’s unique about Toots is she has a birth defect and has just three legs, but it doesn’t slow her down.

Cox and Rogers are both longtime Oxford residents who attended the University of Mississippi, and it was Rogers’ daughter who brought Cox on board with OLHS.

“I started because his daughter Valerie called me. There was a very large bulldog who was not getting along with other dogs and his lifespan was dwindling,” she said. “So I went up there and grabbed him and that was about three years ago. He was my first foster. Animals have always been my passion and I like to do community service, and I feel that this is my good deed that I do.”

Rogers encourages residents to get involved with OLHS in some way, even if it is small.

“I’d like for the general public to have more awareness of what they can do to help the shelter,” he said. “At any given time there’s as many as a couple hundred animals for adoption out there. If people can’t adopt a dog, they don’t want to take on that responsibility, they could try fostering the dog, which is less of a commitment. Things don’t work out, the animal can always be brought back. Or they could go out and at the very least use some of their spare time to exercise the dogs. There are two wonderful exercise pens out there at the shelter. They can play with them. There are often people out there looking for dogs while volunteers are out there playing with them and it gives them a better idea of what behavior they can expect from the dog.”

Rogers also has a foster of his own, Josie Wells, a blackmouth Curr who is a little over a year old and is a strong dog looking for some acreage to run and play on.

Cox said OLHS is an “awesome shelter” and hopes others will consider fostering.

“Most of the general public has no idea what unconditional love is. The only place I know to get it is via dogs, canines,” Rogers said. “I go by the philosophy that dogs aren’t my whole life, but they make my life whole. That’s a philosophy that most dog owners would agree with.”