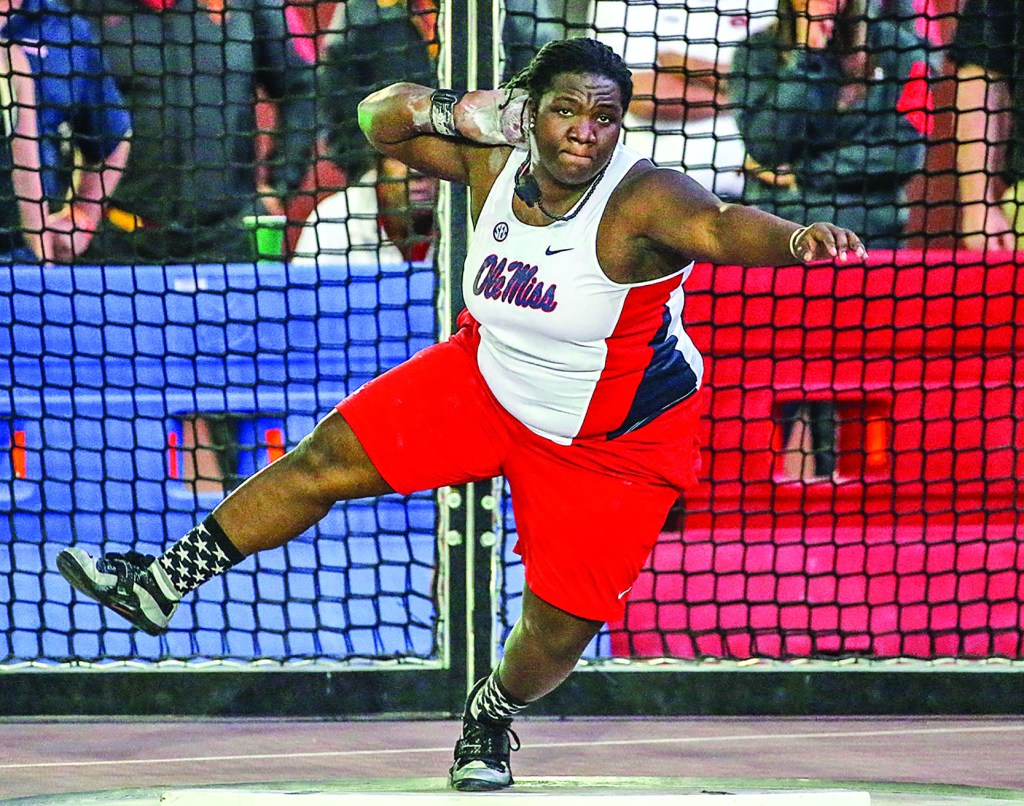 EUGENE, Oregon – Ole Miss sophomore Raven Saunders defended her NCAA outdoor shot put title Thursday, and she did so in the most impressive way.

On her fifth throw from the rain-soaked Hayward Field shot put ring, Saunders launched the 8.8-pound metal ball such that it seemed to stay in the air forever. It flew over the 60-foot mark, then 61 feet, 62 feet, 63 feet. When it finally landed, the 5-foot-5 Rebel who had more than a few beads of rain sitting atop her newly dyed, short-cropped red hair, had shattered a 33-year-old collegiate record with a mark of 19.33 meters, which is 63 feet, 5 inches.

No one was going to top that.

NCAA titles are nothing new to the Charleston, South Carolina, native. She claimed the indoor and outdoor national crowns as a freshman last year at Southern Illinois University. But when this one landed in the brown gravel pit on this particular day, she knew it was special. She threw her hands in the air and celebrated when the display board proved to her and the 9,027 fans in attendance just what she had accomplished.

“Wow, I didn’t even notice,” Saunders said when asked if she knew the record she broke was 33 years old. “One thing my coach always stresses to me: records are going to get broken, but titles are forever. So, I got the win.”

What’s more, she thought she could have thrown better.

“Technically I feel like I set it up OK, but I definitely missed it. Basically on my strike, I threw my head so the shot came off slightly early.”

The season is not quite over for the Ole Miss sophomore, as she will be back in Eugene to compete at the U.S. Olympic Trials next month. Saunders talked about what this meet does for her in preparation for that one.

“Basically try to do the best that I possibly can every meet,” Saunders explained. “This was a great setup for going into a really high intensity championship meet. So it really sets me up for the Olympic Trials.”