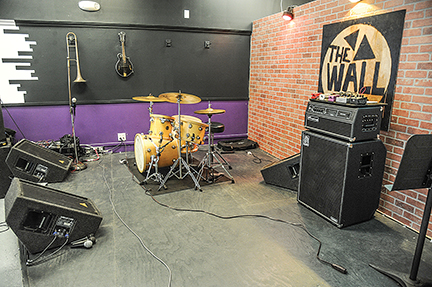 The Wall, a do-it-yourself music venue, is located on West Jackson Avenue.

When local vape shop Vaporized Oxford moved into its new location at 2130 W. Jackson Ave., owner Tanner Scaggs suddenly found himself with a lot more space to fill and quickly recognized that his shop alone wouldn’t do the job. However, with the help of Austin Wheeler, his bandmate in local act Holy Ghost Electric Show, Scaggs hatched an idea that would eventually grow into the newly-opened do-it-yourself music venue The Wall.

“Whenever Austin and I first walked through here to kind of check out the hollow shell that it was, we were trying to figure out how to fill space because a vape shop takes up nothing,” Scaggs said. “We kind of joked about putting in a venue, we just kind of joked about it.”

Wheeler pointed out to Scaggs that they had a PA system capable of providing quality sound for a music venue, and the two decided to run with the idea.

“Because we lucked into a PA system, we kind of built the venue around a PA system that was free,” Scaggs said. “Through that, we opted to build a bar, and now we sell beer during nights. Then, we ended up building the stage for bands to play at.”

When designing the stage, Scaggs luckily had his own band as a frame of reference for the stage’s design and dimensions.

“When designing the stage, we designed it around Holy Ghost (Electric Show) because we needed a stage that Holy Ghost could play on, a seven-member band,” he said. “If it can fit seven people, then it can fit any band, and that was like the minimum criteria for the stage.”

Forming the backdrop of the stage, however, is the brick structure that not only is the most immediately striking visual in the building, but also ended up inspiring the very name of their new music venue.

“We found this brick material that we used lining parts of the wall we ended up building,” Scaggs said. “We were trying to come up with a name for the venue, and ‘The Wall’ just kept pulsing through our heads because it’s the only thing in the whole place that’s really any different.”

Wheeler can’t help but admit that his and Scaggs’s shared love for the famous Pink Floyd album also played a part in the naming process.

“It was like, huh, ‘The Wall’ is a really good album, we both really like that album, and there’s a giant wall in the store,” Wheeler said.

Although Scaggs claims that all of the designs and the building processes happened mostly on the fly without any real model in mind, he and Wheeler agree that the venue was certainly influenced on a conceptual level by other DIY venues around the region, as they tried to maintain the spirit and authenticity of these types of venues, while still creating the highest quality space they could.

Wheeler mentioned the Jackson venue, Big Sleepy’s, as being an inspiration to him and Scaggs in starting their own venue, as the two began to realize that, although Oxford has several music venues that they both love dearly and continue to support, the town was in need of a different kind of music venue that gave a platform to less represented artists and genres.

Wheeler also said that house shows around Oxford opened his eyes to the community of music lovers to whom he hopes this new venue will cater.

“House shows were a big inspiration for me because I thought, man that’s a whole market of people that want to see different styles of music.”

After having to make drives to places like Memphis or even Birmingham and Nashville to be able to see certain types of artists, Wheeler is now glad that he has the chance to bring these kinds of acts to his own town.

Wheeler admits, however, that the biggest inspiration for The Wall comes from his hometown of Fulton, Mississippi, home to Carrie’s Coffee House, which would prove to be a landmark institution for Wheeler growing up.

“These two wonderful people, named Mike and Alison Schuchs, opened a place called Carrie’s Coffee House,” he said. “They put a stage in it, they put video games in it, cheap food, cheap coffee.”

Carrie’s became a safe haven for local youth to come hang out and have a free space to explore themselves and stay out of trouble.

Always standing behind these kids in support were the Schuchs, providing a place where Wheeler and other local youth could experiment for the first time with music and artistic expression.

At its core, Wheeler can trace his passion for a venue like The Wall directly to Carrie’s Coffee House.

“They started this thing in me that made me want to be able to make that place for other people, that inclusivity, that free space for art where you can come and not fear judgment of any kind. It’s a place to be free with your expressiveness and to be who you are at your most creative,” he said.

To bring things full circle, whenever Carrie’s Coffee House finally closed its doors, Holy Ghost Electric Show was able to play their last show, and the next day, Mike Schuchs called Wheeler and told him that if he wanted their PA system, they would gladly donate it to him and the rest of the band. Now, this PA system that was there for Wheeler in some of the most important times of his life is the very same system being put to use in The Wall.

“We’ve never had room for a house PA, and I’ve always wondered what was it that this PA, that taught me that I love music, that taught me how to perform, where is it going to end up?” Wheeler said. “I don’t feel right, it just rusting away in a shed. This is like my tribute of sorts to what they created for me.”

Scaggs points to the story as a prime example of what the venue hopes to do for other local artists.

“It’s the whole pay-it-forward thing,” he said. “We’ve been fortunate enough to be given this opportunity with all this space and we want to do the best we can with it.”

Wheeler hopes that they will be able to give a platform for up-and-coming artists in Oxford to get their foot in the door in what can be a crowded music scene in Oxford.

“I’m wanting to make it a little easier for people to get some traction in this really, really difficult scene,” he said.

Appropriately, given the venue’s emphasis on community, Scaggs said that the rise of The Wall has been a true group effort.

“The best part about this whole thing is that it’s been so collaborative,” he said. “We had members from (local band) Pinebox come out and help us set up the sound system, so we owe a big thank you to them. Cody Rogers from Holy Ghost ended up designing the logo for The Wall. We had help from Alex Movitz on getting that TV set up with videos that we play during band nights. We’ve had photographers come help us. We’ve had artists donate work. It’s been a weird communal effort trying to get this thing going on, and that’s been the best part about it.”

Wheeler emphasized the importance of the continuation of this community effort, however, in keeping the space alive and thriving.

Scaggs sees The Wall as playing a vital role not only for its patrons, but also for the greater community of the Oxford arts scene as a whole.

“Something like this with freedom of expression has to exist in a town for creativity to flourish, and without that, you have nothing but stagnation,” he said.