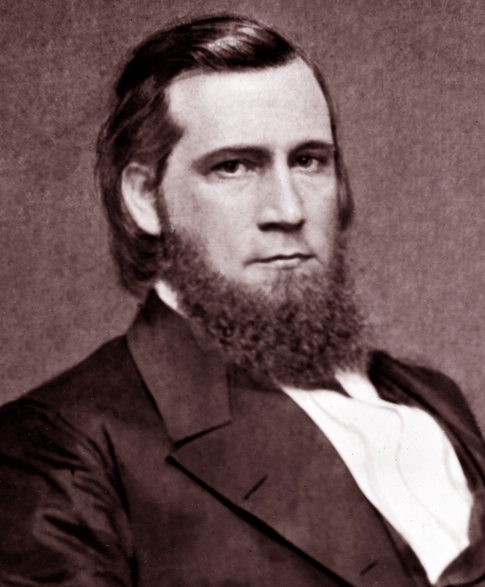 Recently, I took a group of visitors to Oxford on a tour of the Lamar House Museum. When I began my tour I always have the group come and stand with me at Lamar’s statue. I give a little background of Lamar’s early life in Georgia and then his move to Oxford.

Lamar came to Oxford in 1850. He and his family made the move when his father-in-law, Augustus Baldwin Longstreet, was made the second president of the new state university in Oxford. Lamar was then only 25 years old and had completed his training as a lawyer before he made his way to Oxford.

One of the tour groups asked me when Lamar started to gain his prominence as a public orator. I remembered that his first public speaking engagement happen shortly after his move to Oxford. It was an “off the cuff” speech made on the grounds of the Lafayette County Court House. He was asked to debate Mississippi Senator Henry S. Foote and his vote in Congress on the Compromise of 1850. This was a bill that was passed in Congress to stave off a break between the North and South.

In each town around the state that Foote would speak on the subject, a person in the town was offered the opportunity to debate Foote on the measure. He had planned to come to Oxford, but the person he was to debate was unable to speak. Due to the lack of a person to debate Foote, Lamar, who was by then a university professor and local attorney, was asked to debate him on short notice. His “off the cuff” speech bolted him to prominence in this new hometown and his adopted state.

The debate was held on the Town Square on the grounds of the Court House. One of the most interesting accounts of the speech reflects on the manner in which the speech was given. Lamar used no notes and spoke and spoke for several hours, which he would do in other orations. Lamar was known to “exhaust to subject” when speaking and would speak for hours on the subject of a debate.

In 1876 Lamar wrote to one of his friends concerning his manner of public speaking and to the fact that he almost never committed a speech to memory. “I am 48 years old now, and have not done such a thing but once or twice (on literary occasions) since I was 21. I cannot write a speech. The pen is an extinguisher upon my mind and a torture of my nerves. I am the most habitual extemporaneous speaker that I have ever known. Whenever I get the opportunity I prepare my argument with great thought, for my mind is rather a slow one in constructing its plan or theory of an argument. But my friends all tell me that my offhand speeches are by far more vivid than my prepared efforts.”

Lamar’s son-in-law, Chancellor Edward Mayes, is quoted in his biography of Lamar concerning this first public speech, “It was a great compliment to him, a young man of 26, but it was a fierce ordeal. He had no practice in polemical discussions, and was without experience in practical politics.”

“His antagonist was an experience and trained politician of the highest official position, who had been driven to bay and was now exulting in victory, whose adroitness and pugnacity was unmatched in the State, whose hot temper and personal courage were proverbial, and whose tongue was untiring and vitriolic.”

The debate was attended by a great number of university students. Their actions were an indication of how well the young professor did in his first public speech. At the conclusion of Lamar’s speech the college students were “wild with excitement and pride, and bore him away from the hustings upon their shoulders.”

For a young man of 26, his success over Senator Foote was considered phenomenal. This one speech is considered by Mayes as “to have been the foundation of Mr. Lamar’s subsequent political advancement. It was the flood which led on to fame, albeit not to fortune.”

One of the curious things that came about after this debate concerns Lamar when he was a United States Senator some twenty-seven years later in 1878. Foote had been “brought to bay” because he had gone against the instructions of the Mississippi Legislature. Also this time in history Senators were still not elected by the public, they were still appointed by the state legislature. Thus, when Foote went against their wishes, he was going against the very people that had put him in office.

Now the ironic thing is the Senator Lamar, in 1878, would go against the wishes of the people that had put him in office. It was a different subject before them at the time. This time it dealt with silver and the coinage of silver. Lamar would go against the Mississippi Legislature and vote different than they had instructed. He would be “brought to bay” as Senator Foote was earlier. Lamar would also canvas Mississippi and debate anyone that disagreed with his vote.

The standing up for what he thought was right, was used in a book by President John F. Kennedy, “Profiles in Courage.”