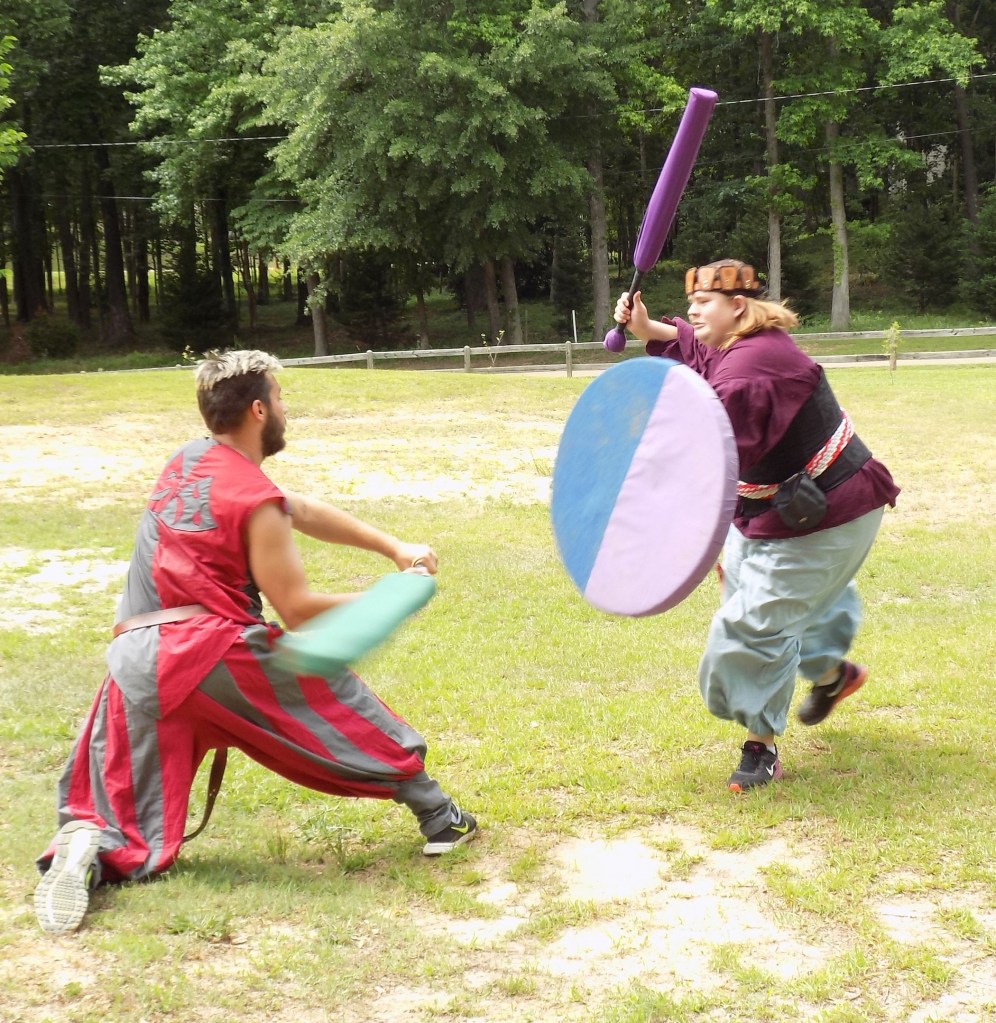 If you ask most people what LARP means, you might get some strange answers, but a common response is often, “It’s when people dress up and fight with foam swords like in that movie, Role Models, right?”

The movie, “Role Models,” did help to put the spotlight on LARPing, introducing the concept to a broad audience who may have never seen or heard of it before the movie.

Kyle Whithorn was one of those audience members.

“I watched the movie and thought I’d like to get into something like that,” Whithorn said, who lived in Iowa at the time. After a quick Google search, he learned there was a LARPing group just a couple miles from his home. “I learned to fight in six feet of snow.”

After moving to Oxford almost three years ago, he started the Rebels Hold group, which meets at 2 p.m. on most Sundays at Avent Park.

“Living in a college town, it seemed like a perfect opportunity to start a park (LARPing group),” he said. “Our numbers fluctuate. We’ve had as many as 34 people, but generally it’s about 10 or so.”

Rules? But isn’t it just hitting people with swords?

“It’s a fantasy LARP where you can be whatever you want, but when it comes to battle games, there are rules,” said Dylan Nicholson, who joined the group about a year ago.

Amtgard boffer combat doesn’t involve people running around aimlessly with swords and bows and arrows, engaged in a battle. There are guidelines and rules to follow. Those participating in the battles must sign a waiver before picking up a weapon.

“You can never hit someone in the head,” said Lance Shipley, who holds the title of chancellor and keeps track of battles, scores and players’ levels.  “We have a leveling system and basically everyone who comes in gets a credit. When you level up after so many credits earned, you can get new abilities.”

Most players use melee weapons, like swords and lances, although some use bows and arrows and spell balls.

Spell balls are generally balls made from rubber bands and covered with cloth. Players who are mages, like the sword fighters, earn credits to level up and earn more spells. They are “cast” by throwing the ball at the opponent.

Amtgard uses a two-wound system, meaning if you’re hit twice, you’re dead, and out of the battle. No body-to-body is allowed.

Lakyn Collier is an archer. She uses a real bow and real arrows, except the arrows are covered in foam as to not hurt anyone. The extra weight on the end of the bow cuts down on its flight distance, but they can still go a good distance.

“You shoot high,” she said. “Unless you’re close to someone, then you have to do a half-draw back.”

Rebels Hold is a local Amtgard chapter and part of a bigger “kingdom,” called the Principality of Winters Edge.

April Steen, a graduate student at the University of Mississippi, said she became involved with the group after a friend, who worked at an Oxford clothing store, told her about a local LARPer who came in looking to buy clothing for his garb, and became curious and came to Avent Park and checked it out. She is now the group’s monarch, or leader, and serves as a liaison between Rebels Hold, Winters Edge and the national Amtgard organization.

Garb, or costumes, aren’t required to be a part of Rebels Hold or Amtgard, but are strongly suggested. The group’s regent helps each member create their garb.

“If you don’t wear your classes’ garb, when in battle, you don’t get that classes’ abilities,” said member Ross Baldwin.

For those who aren’t interested in battle, there are other ways to be involved with the group, including garb creation and arts and crafts.

For more information, visit Rebels Hold on Facebook or come out to Avant Park on a Sunday afternoon. They gather on the hill behind the tennis courts under a big shade tree.