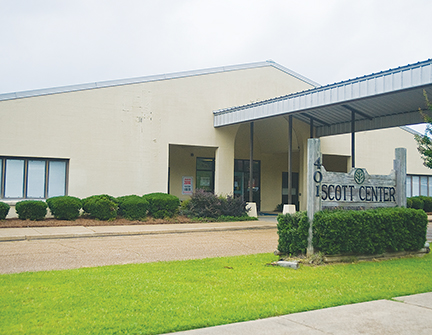 The Scott Center will undergo some exterior renovations.

While the C.M. Scott Center is listed on the lineup for capital improvements with the Oxford School District, the facility’s fate is less than certain.

The center for about 40 special-needs students has been a topic of discussion since mid-2014 when the school district was approached about selling an acre of land it sits on along 5th Street near Jackson Avenue.

Scott Center shares a roughly 8-acre parcel of land with the Early Learning Center, a school for alternative education with about 25-30 students, and a football field.

Oxford School District Superintendent Brian Harvey said everything with the land and school will remain as-is until there is a move for rezoning, and the district knows it has schools on valuable land for the city and University of Mississippi.

In 2014, after being approached to sell that acre, OSD put four parcels out for bid.

“We had to determine the market value and you can do that in a number of ways,” Harvey said. “You can put it out for public bid or you can have appraisals done, so we just said we would put it out for bid. When we got the bids on that initial 1 acre, the bid was for over $3 million.”

The 8.8 acres was divided up into four tracts and Collegiate Housing bid on the whole site for $9.5 million. There also were bids for the first tract at $4 million, and $4.7 million for the first two tracts.

“All of these bids were contingent on the city rezoning the property and we didn’t get a great feeling that at that time the city was open to rezoning at that time because of some things that were going on elsewhere in Oxford,” Harvey said. “So, there were a couple meetings held, but nothing was done. We never made a formal application to have it rezoned.”

The bids are now expired but the land, zoned public/open, isn’t any less valuable.

Harvey said there are new people on the school board and within the city, including a new city planner, but there have not been any discussions about rezoning the property and capitalizing on the monetary value.

“It would be up to our board to make an application,” he said.

“The same law firm represents both the city and the school district. They recused themselves from dealing with this one issue. So the city hired an attorney and we hired an attorney to represent our own interests. It didn’t go very far, we just dropped it after we didn’t feel there was a move to rezone.”

Harvey said it makes sense for the district, which is pursuing a $54 million capital improvement plan, which includes a new elementary school, to sell the land because currently it is leaving $10 million on the table.

“That’s the thing, we aren’t using it for the large part,” he said. “We’re not taking full advantage. The dirt is worth more than the buildings.”

Since the school district needs a new elementary school, residents have questioned why not put a new school there on that property and find a new home for the two other centers. But Harvey said that is not possible due to next-door Oxford Intermediate School.

“We have enough trouble getting the number of kids we have in this school in and out, especially at those high points in the day in the morning and afternoon,” he said. “That’s something we’ve discussed and looked at. There’s no road frontage here. The only access you have is this one-way street, which is probably one of the reasons the city doesn’t want to rezone it.”

So for now, the district is looking at spending $200,330 in 2017 at the Scott Center on needed maintenance — bricking up the front of the school.

“If the city were to rezone it there would be no need to brick it up,” Harvey said. “If the city doesn’t rezone it, and we’re going to be there for the long term, then we do need to have some capital improvements to it.

“The building is fine, but the finish is one of these exterior stucco finishes and it’s flaking away from the building, which can lead to moisture problems. We don’t have any of that, but as with maintenance with any building, if you don’t maintain it, then it starts to dilapidate. Then you’re spending more than you would if you would have just kept it up.”

Even after the school gets bricked up, the school board could pursue selling the land, whether it is one year or five years from now, Harvey said. All it takes is making an application for rezoning and seeing what the city has to say.

Mayor Pat Patterson said the city would entertain an application and the board of aldermen would review it and determine what is best for all residents and the future of Oxford.

“We are working through the Vision 2037 plan right now and if that property were to be rezoned, we would have to be very careful,” he said.

Harvey said it is the only open space in the vicinity of the university that UM doesn’t own.