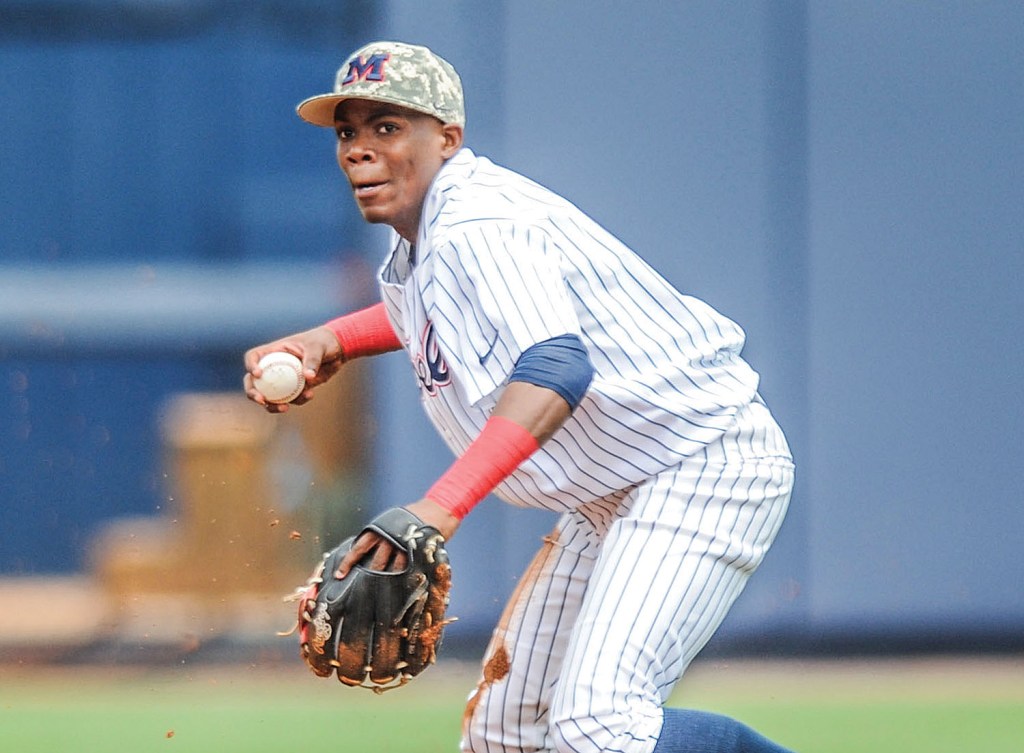 Junior shortstop Errol Robinson was the second Ole Miss player taken in this year’s Major League Baseball First-Year Player Draft, going in the sixth round to the Los Angeles Dodgers. Robinson was one of five Rebels to be selected on the draft’s final two days. (Bruce Newman)

This year’s Major League Baseball First-Year Player Draft is in the books, and it was a mixed bag of expected news and good news for Ole Miss.

The Rebels saw six players on the current roster selected to play professional baseball. The picks ranged from the second round to the 13th round and spanned all three days of the draft, which ended Saturday.

Center fielder and All-American J.B. Woodman was the first Rebel taken off the board as the 57th overall pick to the Toronto Blue Jays with the 16th pick of the second round. Woodman had a solid junior campaign, which helped propel him over shortstop Errol Robinson as the expected first Ole Miss player to be taken. Woodman became the first Ole Miss player to be selected in the first two rounds since pitcher Drew Pomeranz was selected in the first round of the 2010 draft.

“I’m blessed to be able to be drafted by Toronto,” Woodman said in a statement provided by the university. “I’m so thankful for everyone who has helped get me to where I am today.”

Woodman is expected to make well over seven figures as his draft slot is valued at $1,124,000.  He is also the second Ole Miss player to be a part of the Blue Jays organization as former Rebel football and baseball player Anthony Alford is a member of the Dunedin Blue Jays, Toronto’s Class A Advanced affiliate.

Robinson was the next Rebel to be taken, but he had to wait until Friday to see his name come off the board. The junior shortstop was picked by the Los Angeles Dodgers late in the sixth round as the 191st overall pick.

It did not take long for another Rebel to be taken as junior catcher Henri Lartigue went to the Philadelphia Phillies as the first pick of the seventh round and 197th overall. Robinson’s and Lartigue’s slots were valued at $247,900 and $234,000, respectively. 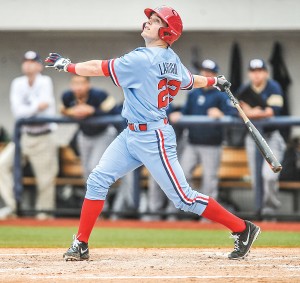 Ole Miss catcher Henri Lartigue was drafted by the Philadelphia Phillies in the seventh round. (Bruce Newman)

“Can’t put this day into words,” Lartigue tweeted moments after getting drafted. “Extremely fortunate to be drafted by such a tremendous organization in the @Phillies. But always #HottyToddy.” An official statement from Lartigue through the university will come after he makes his decision to either stay his senior year or jump to the MLB.

It is the first time Ole Miss had three players drafted inside the top 200 picks since 2013 when pitchers Bobby Wahl, Mike Mayers and catcher Stuart Tuner were all picked in the first five rounds.

The third and final day of the draft got off to a quick start for Ole Miss, and in particular, the Rebel pitching staff.

Chad Smith was the first Ole Miss pitcher to be taken, going as the seventh pick of the 11th round to the Miami Marlins (323rd overall). It was an improvement of 12 rounds as the junior college transfer was selected in the 23rd round of the 2015 draft by the Cleveland Indians when the right-hander was at Wallace State Community College in Hanceville, Alabama.

The year-to-year draft improvement continued two rounds later as Ole Miss ace Brady Bramlett was selected by the Boston Red Sox as the 12th pick of the 13th round (388th overall). Bramlett improved by nine rounds from a season ago when the Oakland Athletics took him in the 22nd round. Bramlett is the curious case of the Rebels’ draft class as it is unknown which career path he will choose.

It could prove as unlucky Round No. 13 as Ole Miss potentially lost its ace and closer with Wyatt Short going 16 picks later to the Chicago Cubs as the 404th overall pick.

The good news that arrived on Ole Miss coach Mike Bianco and his staff’s Twitter feeds came in the form of top prospects of the 2016 signinwg class deciding to honor their commitment to play at Ole Miss come this fall.

Much like Oxford’s Grae Kessinger, other Rebel signees announced via Twitter their plans to arrive to Ole Miss this summer despite being drafted.

Catcher and Carmel Catholic (Mundelien, Illinois) player Cooper Johnson made his decision known late Friday afternoon as the second day of the draft was winding down. Johnson was drafted by the Cincinnati Reds in the 28th round as the 828th overall pick on Saturday.

Jackson, Tennessee native and University School of Jackson pitcher Ryan Rolison also announced he would be coming to Oxford this summer on Friday evening. Rolison was taken by the San Diego Padres in the 37th round Saturday.

“Can’t wait to get to work at Ole Miss in July,” Rolison tweeted. “This class is about to do something big next year. Hotty Toddy #Olemaha.”

Parkview High (Lilburn, Georgia) pitcher Will Ethridge was picked in the 35th round by the Seattle Mariners. Starkville’s A.J. Brown, a football signee, was selected by the Padres in the 19th round but is already enrolled at Ole Miss.