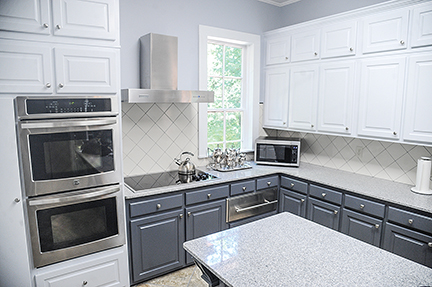 The Cedar Oaks mansion was recently given a face-lift to modernize its kitchen, create more space for events and become more accessible for people with disabilities.

A few punch-list items remain but for the most part, the remodeling is complete, according to Dianne Fergusson with the Cedar Oaks Guild, the nonprofit organization that helps raise funds and promote the home for events.

The project involved the back of the home and included creating a new utility room off the meeting room, and closing in the small back porch to create a sun porch just off the kitchen. The bathroom was completely remodeled, making it larger, more modern and more accessible.

The kitchen underwent some major changes under the direction of guild member Tricia Copelin, a former home economics teacher. The kitchen was upgraded to have two working ovens and more counter and cabinet space. The original cabinets were left in place and painted, while additional space was added.

“She brought to bear not only her incredible knowledge of workable kitchens but also her artistry,” Fergusson said of Copelin. “We think that caterers in the community will find this to be a much more workable kitchen for rental events.”

Another major undertaking was the creation of a new deck and large brick patio in the backyard. Prior to the patio, the home only had a small back porch.

“This opens a new rental venue that provides a special place for private events and expands the capacity of the house as a unique space for special events,” Fergusson said. “I can see lots of pretty parties here.”

Cedar Oaks Guild members will continue to work with the Oxford Buildings and Grounds Department to enhance the patio by planting more bushes around the patio.

A new ADA-compliant entrance was created in the back near the patio. Those people with disabilities will be able to use a vertical lift to get on to the deck.

“This lift will open onto the new deck and will provide entrance into the house via the Theora Hamblett sun porch, an extension of the main hall,” Fergusson said. “The remodeling project has eliminated the back door entrance to the house; we now have a west and an east entrance, both of which bring visitors into the central part of the house.”

William Turner built Cedar Oaks in 1859. In 1864, it was set on fire by occupying Union troops. Nearly a century later, Cedar Oaks was picked up and moved from its original location on North Lamar Boulevard to its current location on Murray Street. The home is maintained by the Oxford Historic Properties Commission and is available for events, such as weddings, receptions, club meetings, baby showers and more.

The cost of the remodeling project was about $58,000; however, with some of the materials and work being donated, the actual amount is about $75,000. The work was done by contractor John Melton, who did some of the work pro bono.

A majority of the funds for the remodeling project came from the sale of a Theora Hamblett painting that was donated to Cedar Oaks in the 1960s. The painting couldn’t be displayed at the home safely and it had previously been on display at FNB Bank and then at the University Museum. The rest of the funds had been raised by the Centennial and Cosmopolitan Clubs — before the two combined in 2011 to form the Cedar Oaks Guild — through various projects that included the Spirits of Yoknapatawpha County performance in 2014, as well as dinners at Cedar Oaks, yard sales and other projects.

“This is about 10 to 12 years of fundraising by the former clubs and the guild,” Fergusson said.

Before the guild could do the remodeling, members had to gain a permit from the Mississippi Department of Archives and History since it is a Mississippi historical landmark. The guild received the permit in October 2015 and was given a year to complete the work. The permit came with some requirements, such as keeping original doors to the kitchen, back of the house and bathroom and the shed roof over the deck.