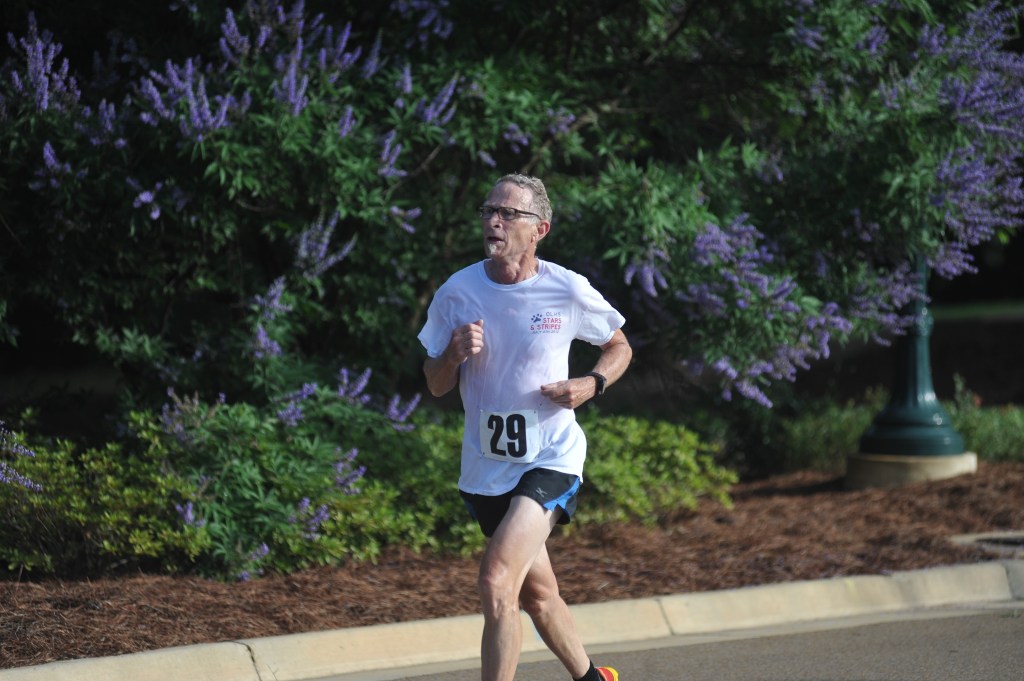 Richard Raspet leads the Run in the Sun 5k to benefit Special Olympics in Oxford last summer. Raspet, who won the race, finds competitive running to be fun, as well as beneficial to staying in shape.

Newton’s first law of motion states that a body in motion must stay in motion.

This is a lesson Rich Raspet takes to heart as he continues to stay active and run track after retirement.

Raspet, a former University of Mississippi physics and astronomy professor, continues to run track and bike in competitive races. Recently competing in the 940KM TT in Little Rock, Raspet shows no signs of slowing down.

Raspet began running in intramurals in college and ran a few races at Ole Miss when he first started working there in 1987, but never really thought much about racing. After running in his first Double Decker 10k race, Raspet was encouraged to continue running by fellow professor Adam Gusso.

Both Raspet and his wife, Wendy Garrison, joined the new Run Oxford, a group of local runners, and started racing competitively in local events.

“Being new to running, there are many things I enjoy about it,” Garrison said. “This past year we have been to around 10 races together. As you drive to the race, you are almost wishing that you weren’t, but then when it is over, there is so much happiness.”

Raspet has been a cyclist for the past 33 years, but felt he was not able to work all the muscles needed to stay in shape. By swapping two to three days off his biking schedule for running, Raspet is able to work different muscles and increase his flexibility. Raspet also believes that running is good for preventing osteoporosis, a condition where bones can become weak and break.

Not only does running help Raspet with his health, but it also helps him stay active in the community. Run Oxford meets in the summer on Sundays at 2 p.m. The running group also has parties and special events that help members get to know each other and discover more about running.

“It’s encouraging to see such dedication to a sport,” Marvin King, president of Run Oxford’s board, said about Raspet. “The drive and determination to succeed is inspirational. Everyone at Run Oxford cheers his successes.”

Raspet’s love of running is inspired by his work with the Oxford-Lafayette Humane Society and a book he read about the Tarahumara Indians. Raspet also is inspired by local runner Brian Pope.

“Brian Pope is an inspiration by his records and consistency running,” Raspet said. “He glides when he runs.”

Among his hobbies, running and biking are Raspet’s top favorite sports. He would like to persuade others to try a mixture of biking and running to get the feel of both sports. The Oxford Cycling Club and Run Oxford are open for new members, and both offer enduring challenges while having fun.

“From what I see in Oxford, the young people don’t need any inspiration from me to run fast and have fun,” Raspet said.