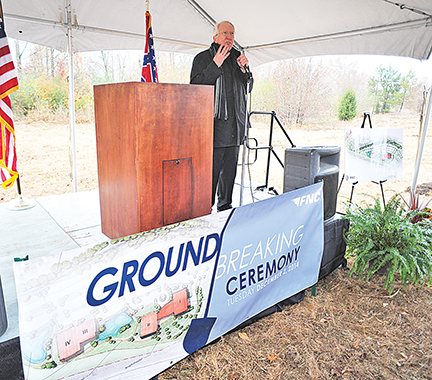 Bill Rayburn, CEO, Chairman of the Board, and FNC Co-founder, speaks during a FNC headquarters groundbreaking ceremony in Oxford, Miss. on Dec. 2, 2014.

While CoreLogic, the company that recently acquired the mortgage technology firm FNC Inc., will not be moving forward with previous plans to build a new 68,000-square-foot facility, company representatives say FNC will remain at home in Oxford.

“We are committed to staying in Oxford,” said Alyson Austin, director of media and public relations for CoreLogic.

Before being purchased by CoreLogic in the latter part of 2015, FNC had cleared 25 acres just north of its current facility and held a groundbreaking ceremony in December 2014, which was attended by Gov. Phil Bryant.

A year later, FNC Inc. was purchased by CoreLogic for $475 million. On Tuesday, Austin confirmed that CoreLogic will not be going forward with the construction of the new facility.

“It was a CoreLogic corporate decision,” she said.

A new frontage road was planned to give FNC access to Highway 7 that would have been largely paid for through a $2.3 million grant from the Community Development Block Grant from the U.S. Department of Housing and Urban Development. The city of Oxford, Lafayette County and FNC planned to split the cost for the 20 percent match for the grant — about $80,000 each. Utility lines were put into the new site.

Austin said CoreLogic will repay any expenses paid by the city or county for the road or other infrastructure already put onto the site for the future headquarters.

“We will be staying at the current facility and upgrading and improving as needed,” she said.

Austin said CoreLogic wants to grow its presence in Oxford over time.

The new facility was slated to create an additional 300 jobs. While those plans have changed, Austin said the company will continue to operate as it has been in Oxford. FNC employs about 300.

“Planning any layoffs is not in the picture,” Austin said. “We want to participate in, and support Oxford and be as much as the fabric of the community as FNC always has been.”

FNC owned the 25 acres where the proposed expansion was going to be built, so CoreLogic now owns the prop- erty. Austin said there’s currently no definite plans on what the company will do with the property now that the new facility is off the table.

“We are still reviewing our options for the site,” Austin said. “We are going to take our time. It’s an important decision we aren’t going to take lightly. We’ll work with the FNC folks and make sure we’re doing what’s best for the community.”

Jon Maynard, president and CEO of the Oxford-Lafayette Chamber of Commerce and Economic Development Foundation, expressed disappointment in CoreLogic’s decision to not move forward with the new facility.

“However, in conversations with FNC, they have indicated that they are committed to keeping and growing their work- force in Oxford. This is encouraging. We would like to offer CoreLogic and FNC all of the support that we can as they grow their presence in Mississippi.”