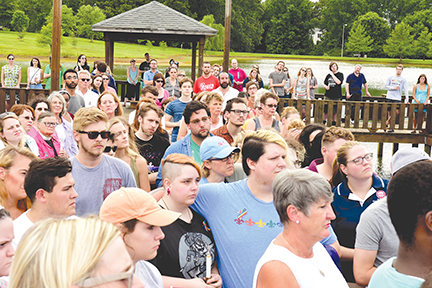 A crowd of over 200 attended the Candlelight Vigel held at Pat Lamar Park for the victims in the Orlando shootings. Photo ©Joey Brent

Throngs of supporters gathered in Lamar Park Tuesday to stand in love and solidarity in the face of the recent attack on a gay nightclub in Orlando, a hate crime which left 49 individuals dead, constituting the deadliest mass shooting in modern United States history.

Combining efforts of university groups such as the University of Mississippi Pride Network, the Sarah Isom Center for Women’s and Gender Studies, the Center for Inclusion and Cross Cultural Engagement, OUTlaw, the William Winter Institute for Racial Reconciliation, and PFLAG Oxford/North Mississippi, the candlelight vigil represented a powerful symbol of unity in the face of hateful actions, as the event attracted support- ers spanning all facets of society — age, race, gender, religious belief and sexual orientation — as they stood in remembrance of the fallen victims.

Gathered around the pier at Pat Lamar Park, the large crowd stood in solemn silence as speakers from these various organizations delivered moving messages relating to the tragic shooting as well as to the LGBTQ community as a whole.

Not living in fear

First, the outgoing president of the UM Pride Network, Spencer Pleasants, spoke poignantly on the way that the shooting has reverberated across the nation, especially among LGBTQ communities, as they were forced to confront the fact that they could have easily been the victims to such senseless violence, as the Orlando victims were simply enjoying themselves in what they hoped was a safe space at the time of the attack. Pleasants, however, noted the importance in not letting a “boogeyman” scare you and affect the way that you live your life, effectively combatting these hateful actions through your own love and happiness.

Next, another former president of the UM Pride Network, Robert McAuliffe, stressed the importance of keeping the focus on the victims of the attack and on allowing time for a period of reflection and grieving as people attempt to process their emotions following this tragedy.

He also discussed the significance of reinforcing feelings of love and safety for members of the LGBTQ community in the wake of such a stark, violent disrup- tion of a supposedly safe space for these individuals.

After McAuliffe, Jennifer Stollman, academic director at the Winter Institute, delivered an impassioned message focusing primarily on some of the broader implications of the Orlando tragedy.

In her remarks, Stollman posited that the public should not be asking how such a horrible thing could happen, but rather they should consider how such a tragedy

could not inevitably happen in today’s political and social climate, which too often plays off of the human emotions of fear, exclusion and anxiety resulting in patterns of hate speech that eventually lead to these horrific outbursts of violence.

Following Stollman was Gail Stratton, a member of PFLAG Oxford/North Mississippi and a Unitarian Universalist minister, who delivered a powerful speech on the importance of maintaining love for both others and our- selves throughout these confusing times.

Stratton stressed that we’re all “a big hot mess of identities,” and that instead of making assumptions about others, it’s vital to demonstrate love and solidarity, especially in the wake of the cruel tragedy of an act rooted so heavily in hatred that targeted a group based on who they loved.

“Let us refuse to let our differences define us,” Stratton urged supporters.

After Stratton’s remarks, a passionate reading of Maya Angelou’s poem “A Brave and Startling Truth” was given, with its themes speaking to the power of overcoming violence and hatred in order to create a world of love, support and inclusion.

During the ceremony, a moment of silence was observed for the fallen victims, and supporters took turns reading off victims’ names one by one, serving as a powerful reminder that these victims were all individuals with their own identities and lives.

Moving forward from this tragedy, there will be a Current Events Conversation on Thursday at noon in Brevard Hall, Room 134, sponsored by the UM Pride Network, the UM Counseling Center, the UM Center for Inclusion and Cross Cultural Engagement, the Sarah Isom Center for Women and Gender Studies and the William Winter Institute for Racial Reconciliation.

This event will provide a public forum for reflections and responses to the Orlando tragedy to any interested parties.