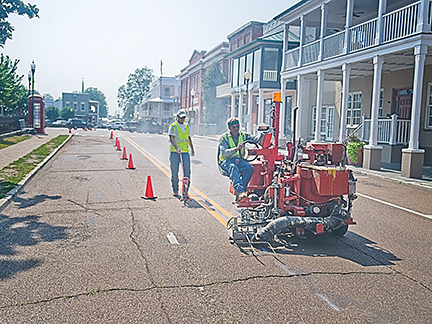 Workers change the driving patterns to two-way traffic on Jackson Avenue near the northeast corner of the Square in Oxford on June 14.

Construction is underway to connect the Square to West Jackson Avenue and will allow for two-lane traffic.

For years, Jackson Avenue East near Oxford City Hall has been one-way for a small section of the road, but now will open up a new lane so that drivers can turn right from City Hall at a stop sign and turn onto Jackson Avenue.

The city approved the two-way in February, and compromises were made with the Americans with Disabilities Act to move the handicap parking.

The 1993-94 edition of the Ole Miss Faculty Senate discussed some new issues, such as the problems with parking on campus for teachers. The senate agreed however that stricter controls were needed to monitor the students’ abuse of parking privileges.

The senate also addressed the dwindling benefits offered by the state’s insurance plan. The plans seem to favor in-state treatment rather than those who seek treatment in other states like Tennessee.

A large 12-by-8-foot play house is being constructed and will be raffled off by the North Mississippi Homebuilders Association at the Fourth of July celebrations in Avent Park. The house will be insulated, paneled and wired for lights and electricity. Partial proceeds will go to Habitat for Humanity.

Virginia Briner, local artist and teacher, gained recognition for her paintings in a local restaurant. Her painting of Hurricane Landing was done in golds and browns. The scenes from the painting depict the calm nature of the painting. Briner tells about how life would not be the same if her father had sent her to art school and admits that she is glade he didn’t.

A driving test film taught students the dangers of driving. Oxford High School Driver’s Education Teacher John Robbins hopes the simulator will make prospective drivers more aware of different situations that they might not normally encounter during their drive.

The mobile trailer with fake cars inside was provided by the State Department of Education and is moved from one town to the other to ensure that all schools could get a chance to use the simulator.